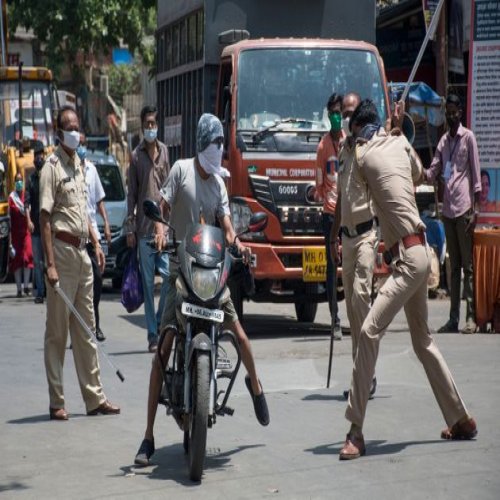 The police strict Vigil during lockdown period costs heavy to many in Hyderabad. According to citizens, police harassment during lockdown relaxed period shopping increasing day by day on common people. Social media flooded with complaints.

In the first week of April after the lockdown was imposed in Telangana, Mohmmad Noor, a driver by profession and a resident of Masab Tank in Hyderabad, ran out of rations at home to feed his family of four. He was asked to collect rations for his family and make ration delivery to an elderly couple by a volunteer group, but was caught by the Hyderabad traffic police for driving without a helmet, “They confiscated the two-wheeler for not wearing a helmet at the time of lockdown when there is no available public transport. The law and order officials along with the Asif Nagar traffic police station assaulted me for being outside, they made me wait for a long time and then let me go. I walked and made the ration delivery,” says Imran.

It was not easy getting the confiscated vehicle back, the traffic police levied Rs 800 as fine whereas the actual fine amount for riding without a helmet is just Rs 200. “They didn’t give an explanation as to why I had to pay Rs 800 fine as against Rs 200. It was also risky going to the traffic police station to get the vehicle back as two people on a bike are also not allowed,” says Imran, who alleged that the police took back the traffic challan issued to him at the time of releasing his two-wheeler.

Similar instances where traffic police confiscated vehicles of persons and families stepping out to buy groceries even within the 3-kilometre radius from their residence and forcing them to walk back, were reported by three other families in the city.

As of April 18, the Hyderabad Traffic Police have booked 15,382 persons under the Motor Vehicles Act, while seizing 2,193 vehicles, of which 1,804 are two-wheelers, 139 three-wheelers and 250 of them four-wheelers. A total of 3,228 cases were booked for violation of lockdown orders, about 844 were booked for riding solo on a two-wheeler, 1,224 booked for double riding and 1,129 for driving without documents among other offences.

“Its unfair of the police to confiscate vehicles and levy heavy fines on the poor especially when they don’t have work. Many of these people depend on state support,” says Shahbaz Ahmed Khan, an activist against Ponzi schemes. Shahbaz was arranging ration distribution when a few persons who were desperately in need of ration and were trying to reach him, were stopped by the traffic police, with their vehicles confiscated and made to walk back to their homes. The police are rude and often assault the men if they are from poorer neighbourhoods, adds the activist.

In Sattenapalle town in Andhra Pradesh’s Guntur district, a 35-year-old man named Mohammed Ghouse died after being questioned and allegedly manhandled by police officers for venturing out during the lockdown. He was stopped while reportedly on his way to buy medicines. Many of those stopped in Hyderabad by the police at checkpoints are during the 6 am to 7 pm time allowed by the state government.

“Most of these people who have to go and buy rations are from poor neighbourhoods, mostly Muslims. They don’t want to speak out against the police at a time when there is open communal hatred against the community. They are afraid of being targetted further,” adds the activist.

“My request is that the police don’t levy fines during these difficult times, many of us are not earning,” says Noor who managed to arrange money two days after his vehicle was confiscated. If anyone at home falls sick, don’t we need a vehicle to take them to the hospital? The police doing such things during an emergency is not good. If you levy the fines, don’t force us to pay, at least until we are able to earn something,” he adds.

The Additional Commissioner for Traffic in Hyderabad was unavailable for comment. The article will be updated if and when the officer responds. #KhabarLive