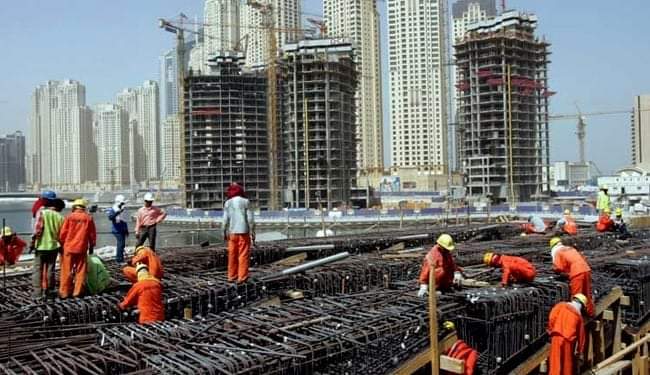 Estimates suggest that post lockdown, around 2,000 migrants from Gulf countries will arrive at the RGIA at Hyderabad every day for the next 2-3 months as all are either fired or lost jobs due to #Covid crisis.

Around 7.5 lakh people from the Telugu States, including 3.7 lakh from Telangana, are awaiting their return to India from the Gulf countries — namely, United Arab Emirates, Saudi Arabia, Oman, Qatar, Bahrain, Kuwait and Iraq. Activists estimate that after the lockdown is lifted, around 2,000 migrants would arrive at the RGI Airport every day for the next two to three months.

Indian immigrants in Kuwait are perhaps the worst-hit. Nearly half of the country’s total Covid-positive patients hail from India. This means that over 1 lakh Telangana natives are at high risk of catching the disease. Recently, the Kuwaiti government had announced an amnesty scheme for (illegal) migrant workers. This has been availed by 3,000 from the State, said a Telangana Jagruthi member. Speaking to #KhabarLive, Muralidhar Reddy, a migrants activist from Kuwait, appealed to the Kuwaiti government to extend the application deadline so that more TS citizens could avail the scheme.

ALSO READ:  Why 'Hyderabad Metro' Will Chug To Airport Along 'IT Corridor' Stretch?

The Covid-19 situation for immigrants is equally bad, if not worse, in the UAE, where four Telangana natives had lost their lives to the disease. A few days ago, Syed Dastagir Ali from Hyderabad passed away due to Covid. Further, in a recent video, a migrant had alleged that a group of them were forced to stay in a quarters where a Covid-positive patient was put up.

Things look better in Oman, says Ravikiran, a Vishakapatnam native. “Oman is unlike the other Gulf Cooperation Council (GCC) countries. The government treats us like its own,” he told #KhabarLive. Like Ravikiran, many from Telangana have registered with Muscat’s ‘travel back to India’ portal. However, they have not been updated of any development for the past two weeks. The 10,000 Telangana natives residing in Iraq’s Erbil were on the verge of starvation until recently. The Telugu Gulf Employees Welfare Association recently began supplying essential commodities to them with the Indian Embassy help.

A majority of Gulf immigrants from Telangana hail from either Hyderabad, Karimnagar or Nizamabad. Nearly 40,000 people from Karimnagar have been confined to their rooms for the last one month in Saudi Arabia, Dubai and Iraq, said Gulf Returning Welfare Society president Shaik Chandpasha. One of them, B Nagaraju from Chinnabonala village (now merged with the Sircilla municipality), went to Dubai six months after his wedding. His wife Padma said she frequently speaks to him over video call. He told her that some people in the Gulf were forced to eat leftovers due to shortage of food.

M Srikanth, from the same village, went to Dubai recently. His mother Narsavva has been requesting the Telangana government to bring her son back. Most of the victims were starving, sources said. According to Shaik Chandpasha, a majority of the migrants went to the Gulf nations on a visit visa through job placement firms. This was because companies were selecting candidates with a visiting visa to avoid providing them with facilities — which they would have to for those on a work visa. Legal agents, who helped these migrants get the jobs, also washed their hands off them during these trying times, he alleged. In Jagtial district, nearly every village had about 10 people going to the Gulf in search of employment.

One of the them, Srinivas, told his family that for the last two months his company paid him only half his salary. The 2-lakh Nizamabad natives in the Gulf are in constant touch with Telangana-Gulf NGOs. They allege that the governments of the respective countries they work in were denying them adequate facilities. #KhabarLive