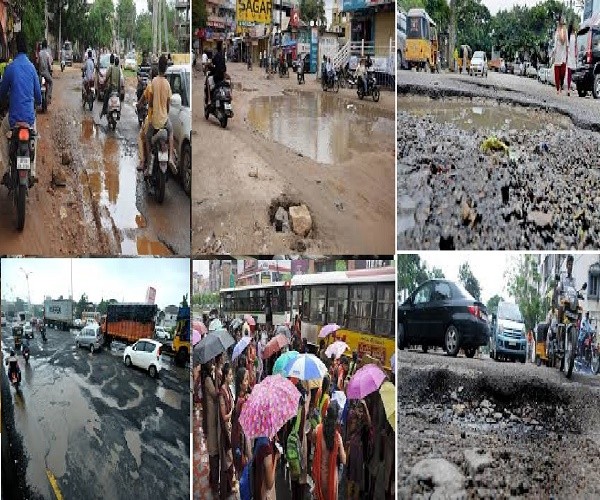 The poor condition of the road has also led to slips and accidents in which commuters have been fatally injured. The last two days in Vijayawada city have been filled with mild rainshower which have left several main roads of the city in a pathetic condition due to the stagnant water and potholes.

Poor maintenance of the city’s underground drainage system has also lead to overflowing of sewage water in several areas. During KhabarLive’s visit to Eluru Road, Nakkal Road and Dornakal Road and several parts of Suryaraopet, stagnation of water and scathing potholes were found in numerous places.

Several commuters have complained that the roads give way even during light rains. “The potholes and unrepaired cracks in the middle of the road pose a threat, a small slip can result in an accident ,” said Suresh K, a biker.

ALSO READ:  'Kakatiya-Era Temples' In Telangana Are Under Sheer Neglect

Not only the main roads, but even smaller roads too are in a pitiful condition.

Many small streets near SBH Branch and Sitaramapuram Colony in Suryaraopet have roads which are in bad condition and become flooded during the rains.

Near the Sitarampuram Signal Junction on Eluru Road sewer blockage led to the water from the drains flowing onto the main road. Dornakal Road near the RTC bus stop too was flooded with water which had overflowed from the sewer. The situation was the same at Kaleshwar Rao Market, where there was a lot of stagnant water and roads were full of potholes.

Residents have complained to authorities about the lapse of maintenance of roads and sewage overflow in the area and the dangerous potholes. KhabarLive contacted Municipality Authorities regarding the situation, who said that regular clearing drives were being conducted.

Chief Engineer, MA Shurook, said “In certain low lying areas water stagnation is there which we are trying to clear as soon as possible. We have instructed our staff to deal with the lapses division wise.”

When asked about potholes and unrepaired cracks he said, “The government has released some amount of funds for repairing and we will soon take up repair work.”

The poor condition of the road has also led to slips and accidents in which commuters have been fatally injured. Police officials have stated that utilising helmets will prevent severe injuries, Vijayawada City Traffic DCP Ram Prasad speaking to KhabarLive said “Whatever the road condition is like, if you guard your head with a helmet, you will be safe. In the event of an unfortunate accident, a helmet can help you save yourself.”

Police and Municipality Authorities are working together to clear the roads after the rains. #KhabarLive