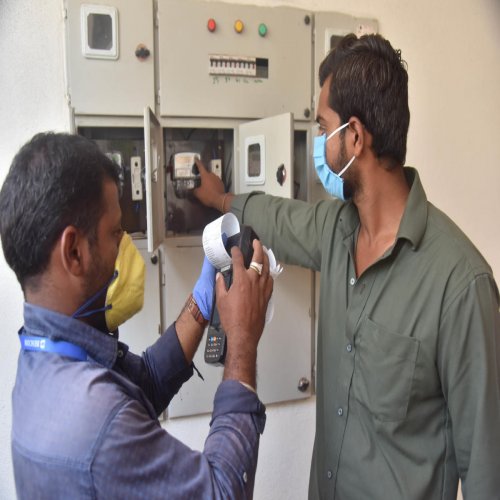 Have the power bills for the last three months given you a bolt from the blue yet? If it has, you are not alone. The TSSPDCL had earlier said that citizens could pay the bills generated in the corresponding months of the previous year owing to the Covid crisis.

Southern Power Distribution Company of Telangana seems to be searching for new ways to tax customers. The end consumers are usually no aware of the technical details, or of the violation, as the power connections are most often obtained by builders or contractors, who contract lesser loads in order to save money.

The government High School in Barkatpura consumed 759 units of power during the month of June, and was charged Rs.4,956.26 as energy charges for the same, which is normal. However, the total amount due, shown at the bottom of the bill, makes the heart skip a beat, at Rs.27,569!

Scrutiny of the bill reveals that a predominant portion of the billed amount, Rs.19,600, is shown under the head ‘development charges’, which would largely go unnoticed otherwise. Further, Rs.9,370 is shown as additional consumption deposit arrears!

The Southern Power Distribution Company of Telangana (TSSPDCL), starved of funds owing to the delay in fixation of tariff for the current year, is apparently searching for new ways to tax the customers and development charges are the latest instance.

Development charges are collected to recover the cost of laying power lines and are usually fixed for each consumer based on the contracted loads. As of now, for every single kilo watt of energy requires payment of Rs.1,200. While as a rule, the loads should be contracted based on the number of electricity appliances and connections in a household or commercial establishment, it is often violated.

“For a single-phase connection, 2 KW is the minimum load to be contracted, and for a three-phase, a minimum of 3 KW. However, nowadays, consumers are connecting up to 6 KW of loads on a single KW of contracted load,” explains an engineer from the TSSPDCL.

The end consumers are usually no aware of the technical details, or of the violation, as the power connections are most often obtained by builders or contractors, who contract lesser loads in order to save money. However, the company has been condoning such anomalies for a long time, especially when they are from LT consumers. Not any more.

“We have been asked to inspect LT commercial and a few domestic connections too for connected loads. Wherever connected loads are more than contracted loads, additional development charges are being levied,” informed an official.

And, if there is considerable difference between the two, additional consumption deposit is charged as one-time security deposit.

“Quite a few schools have approached me with exorbitant power bills, showing huge component of development charges. Such charges may be recovered from private and commercial establishments, but how can government schools pay such bills from their meagre maintenance grant of Rs.20,000 to Rs.30,000 per annum?” asks Amberpet legislator G. Kishan Reddy.

Meanwhile, the meter readings of the Telangana State Southern Power Distribution Company Limited (TSSPDCL) have been drawing up power bills that are nothing short of exorbitant.

However, it has now generated bills for the last three months in one go, without taking into account the change in slab levels. Many residents of the city are overwhelmed by the unreasonably high amounts they have been asked to pay. “I’d paid the electricity bill up to April 2020 based on the consumption last year. In May, I received a bill of Rs 6,390 for three months after adjustments in the amount paid, without taking into account the slab rate for each month,” tweeted PSV Rao, a consumer.

Sarath, another consumer, said, “It’s not fair to collect electricity bill for three months in a single invoice. Many customers now have bills of a higher slab.” However, officials say that the idea has been misconstrued by the public. “Earlier, when the company said that consumers could pay bills generated during the corresponding period of 2019, they were also told that the amount would be adjusted later,” said a TSSPDCL official.

“We are now adjusting the amount.” Citizens, meanwhile, are terming the move unfair as people who had already paid the money during the lockdown (as advised by the company) have also received bills with a newer slab rate for a period of nearly 80 to 90 days. Officials further said that the slab rate has changed due to the increase in consumption. “Consumption was more during the lockdown period. Many people worked from their homes, and hence, their bills have also shot up,” an official source said.

The TPCC alleged that power bills in the State were skyrocketing as the authorities were taking three months’ meter reading in one go, pushing the consumers to a higher traffic bracket. TPCC spokesperson Indira Shoban asked the TSSPDCL why it was not dividing the meter reading into three parts.

The slab rate for many consumers has increased from LT 1 (A) — up to 100-units a month — to LT 1 (B) (II), in which consumption is over 200 units. The charges are almost doubled. #KhabarLive #hydnews