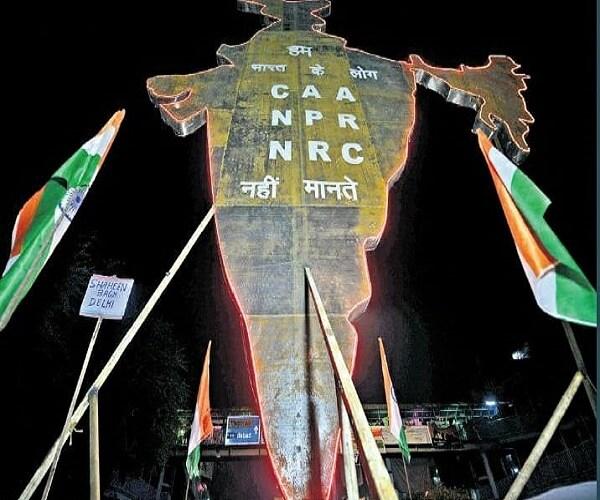 The Citizenship Amendment Act, 2019, was passed to provide Indian citizenship to illegal Hindu, Sikh, Buddhist, Jain, Parsi or Christian immigrants from Afghanistan, Bangladesh and Pakistan, who entered India on or before December 31, 2014. Such immigrants who have also resided in India during the last 12 months or for five of the previous 14 years would be covered by the Act.

The government had said that it would prepare a National Register of Citizens (NRC) to identify illegal immigrants to implement the amendment. The NRC attempt has raised much commotion and people are divided on it. The concern is on the identification of illegal immigrants, whom to be given citizenship and how to deal with others.

Illegal immigrants have come in from various countries like Pakistan, Bangladesh, Afghanistan, China (Tibet), Sri Lanka, Myanmar, etc. There is no official data on their numbers. Of the estimated population of India of about 1.36 billion, the illegal immigrants are believed to be between 20 lakh and 2 crore.

Register of Non-Citizens
The percentage of non-citizens may be less than 2%. To ferret out 2% illegal immigrants, making 100% population prove their citizenship under the NRC is problematic. It appears like digging a mountain to catch a few rats. The immigrants have been coming and going since 1947 through our porous borders. We need to have a method to identify the present and future immigrants. Compilation of a register of non-citizens and its updating along with national census every 10 years can be a practical way for it.

It is also puzzling to know so many identity cards are needed to prove our citizenship. Family identity card, Aadhaar, Voter ID, Passport, Census, etc, are already there. Now the National Population Register (NPR) as part of the 2021 Census is being undertaken. With all the cards and the NPR, it will not be difficult to segregate the ‘usual’ citizens and the ‘unusual’ citizens. In the unusual, with some diligent scrutiny, it is not hard to identify the illegal immigrants. Despite it, if we have to subject all the 100% inhabitants of the country to undergo that ‘sheela pareeksha’ of proving their citizenry, it will be a monumentally wasteful exercise. A sample of it is already seen in the Assam NRC fiasco.

However, the NRC exercise in Assam is a different matter altogether. Assam and some other northeastern States have a history of excessive illegal immigration. And, the Assam Accord, XI schedule and inner line permit obligations, etc, necessitate it.

Alarming Move
It is good to have one legal citizenship card. But the priorities, the method, the timing and the shenanigans in trying to do it now, relegating all other vital interests of the nation, is very alarming. Since the national Census for 2021 is in the offing and its adjunct NPR is to commence from April 2020, many of the citizenship concerns can be addressed in it. And without wasting humongous time and budget of the government in the NRC, the issue of citizenship can be firmed up after the Census. It can also help identify illegal immigrants.

After compiling the register of non-citizens and understanding its composition and complexities, it will be proper to prepare a national policy on illegal immigrants. After all, immigrants did not stop after December 31, 2014. We need a standard policy on the matter. It can be based on the UN Convention or any regional confederation model law or India’s own law. Based on that, a comprehensive amendment to the Citizenship Act becomes meaningful. Whereas, the present amendment to the Act to naturalise some selective immigrants groups and leave the majority of others in limbo is not appropriate. For, it does not solve the ever-pestering long-term problem.

Selective Exercise
It is believed that the intended selective group in the CAA may be in the range of 35,000 to 50,000, leaving a few lakh of others outside of it. Moreover, it also attracts criticism of discrimination on religious grounds. These immigrants were getting accumulated since the late 40s, and their descendants are also living here for long. It is not possible to deport them to any other countries as they are not obliged to take them. Keeping such large numbers in detention centres, as is the plan, is a ‘treatment is worse than the disease’. So, in the end, it might become a pyrrhic exercise.

ALSO READ:  How To Get Over Your Fear Of Needles?

The Supreme Court will decide whether the present amendment is constitutional. Either way, the larger issue of illegal immigration will be very much there. Therefore, it will be practical if a register of non-citizens is prepared based on the NPR and Census 2021. And then formulate a policy on the issue and administer it properly in the long-run.

After the massive protests against the CAA, the government should have been holding meaningful parleys with the protesters. Instead, it is organising support protests for the Act saying it is not going for the NRC; not using the NPR for the NRC; Modi’s word is final, etc. The government has also issued a gazette notification for the CAA, which makes it official from January 10.

In the circumstances, the government trying to micromanage the issue will not serve the purpose. An appropriate CAA can come after working out the list of illegal immigrants and a comprehensive national policy on illegal immigration. Trying to push the present parsimonious CAA down the throat of the nation with political numbers looks authoritarian. Without any basic information on it or a definitive policy in place, the whole slipshod attempt with shifting narrative and without a road map to take it to a logical end, the CAA looks like a horse behind the cart. #KhabarLive