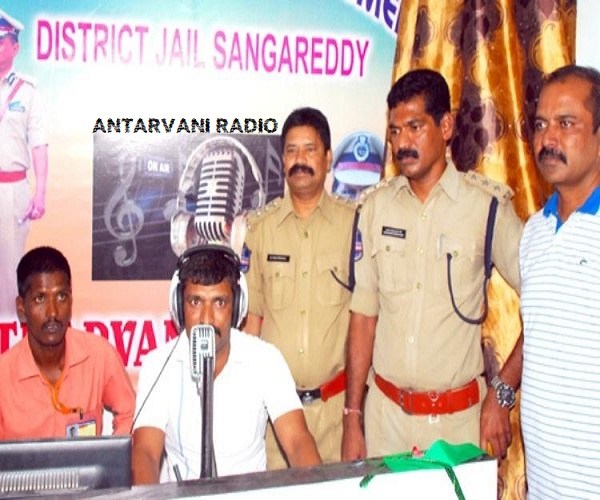 Telangana Jails named as the best prisons In India with prisoners correctional services and rehabilitation initiatives. Many new reforms initiated by the Telangana prisons department and now, the another feather in their cap, Antarvani FM Radio Station.

After the successfull projects like,  salon and a supermarket for prisoners; a petrol pump entrusted completely to the inmates; helping the illiterate inmates read and write in Telugu; turning them into entrepreneurs through furniture making and managing nurseries. And most importantly, ensuring that 90% of the convicts do not return to the jail in the coming years- among the many firsts that the Sangareddy Jail authorities can boast of, they now have another feather in their hat.

Sangareddy Jail has begun an FM Radio for its prisoners, all run and managed by five inmates of the prison. Named Antarvani, meaning the inner voice, the radio was launched on June 10 and has radio jockeys entertaining the inmates through the day.

The radio broadcast begins at six in the morning and goes on till six in the evening. Five inmates have been trained to handle the equipment and run the radio like professionals. Speaking in an impressive voice, playing catchy music and entertaining the listeners, the inmates have trained themselves to be the best.

“We didn’t get any professionals from outside to train the inmates except for people who trained them on how to handle the console and other radio equipment. We selected five inmates from the many who were interested to run the FM and they trained themselves listening to various FM channels, understanding how to modulate their voice and what keeps listeners hooked to radio channels,” jailer Ganesh Babu told #KhabarLive.

“Another batch of five inmates are currently undergoing training,” he added.

Antarvani hosts a variety of programmes throughout the day. The day begins with devotional songs to which the inmates wake up. This is followed by an announcement for exercise, during which drill music is played on the radio.

“We want to turn the initiative into a holistic experience for all the inmates. For this reason, inmates of the 11 barracks will alternate and participate in the radio programmes. There are announcement for meals where everyone is informed about the daily menu, then there is an educational programme called Vidyadaan. The jockeys give motivational speeches too, and we are also planning to get speakers from outside who can talk to the inmates on the channel,” the jailer said, adding, “Any public announcement can now be directly broadcast on the channel, without having to ask the inmates to assemble at a common spot inside the premises.”

Though the radio is completely in the hands of the inmates, the jail superintendent and other officials also turn RJs for a quick 15-20 minutes in the morning. Also, once the inmates are locked in the cells, the guards play music until 9 pm. The barracks are all installed with speakers so that the announcements reach every inmate living inside the prison.

“The FM channel is the brainchild of VK Singh, Deputy General of Prisons. We consider the initiative very important as it’s crucial in improving communication and also to bring forth the hidden talents among the inmates,” Ganesh Babu added. #KhabarLive