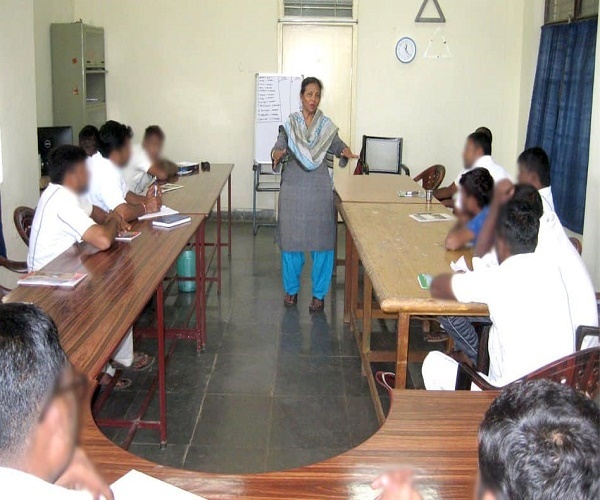 There was a time when Prasant was dreaded by everyone in his locality. He has been in and out of the prison more than once on charges of bank robbery, till the prison authorities got him enrolled in the rehabilitation programme Unnati, conducted by psychologist Prof Beena Chintalapuri.

The cognitive reformation initiative has transformed Prasant into a completely new person, who has just received his first paycheck at a day job and is willing to open a bank account like a free citizen. He falls short of words to express his gratitude towards Beena Chintalapuri, who was selected as an Ashoka Fellow in 2017, for her extraordinary work in bringing down the number of recidivists (repeat offenders) from 80% to 1%.

In an exclusive conversation with #KhabarLive, Beena describes how the mindset of small-time criminals are shaped by their surrounding environment, and how her organisation, Unnati, is transforming their mindset to dream in positive colours. Excerpts:

Who are the repeat offenders?
“The general trend in most prisons show a higher proportion of repeat offenders. These are mostly petty criminals with records of theft, robbery, looting, property offence, drug dealing etc. The prison registers revealed that these prisoners were mostly young men, who would go out on bail, commit similar crimes and return to jail. For many, this pattern had almost turned into a routine,” narrates Beena. These prisoners generally serve short sentences between three months to three years.

Due to an increased number of recidivists, there has been a 74% increase in the prison population.

Overcrowded prisons are affected by unhygienic living conditions, which has resulted in the death of around 12000 prisoners in five years. Most of them were addicts who spent the money on alcohol or drugs. A considerable percentage of them belonged to low-income and less educated background, where the unhealthy environment was not conducive to help these directionless youngsters focus on a bright future.

After their release, many of these people are ostracised by their families or neighbours. They fail to regain their old jobs or businesses. People start branding them as ‘prisoners’, driving them to the path of crime again.

The need for Unnati
When Beena was approached by the Director-General of Prisons, Telangana, to help in the rehabilitation of the prisoners, he specifically asked her to target the recidivists, who were turning out to be an uncontrollable menace. “Life convicts usually get reformed since they spend a prolonged time in prison. But, these recidivists with short jail terms were harder to tackle,” explains Beena. After interacting with them, she analysed their personalities closely to devise a detailed series of modules, targetting the common negative aspects of their behaviour.

“Most of them had wronged under peer pressure, the influence of alcohol and drugs or in a fit of rage. Many belonged to loving families, but the parents being illiterate, failed to propel the child towards a good career,” she informs. She knew that mere advice would fall to deaf ears. Hence, she made everyone narrate their experience in front of others in the batch, and prodded them to reflect and understand the darker nuances of each story. “That was how we attempted to change their thought process and perception of a crime,” she adds.

Started in 2015, the Unnati project has been launched across eleven prisons in Telangana, changing the lives of around four thousand prisoners.

Where are they now?
Most of the rehabilitated prisoners want to resume their old jobs or businesses and for others, the prison administration extends all possible support. Many of them who are out on parole were given employment at petrol pumps and gas stations.

“If I had not joined Unnati, I might have remained a monster and committed more murders out of revenge,” shares one of the rehabilitated.

One convict, who has served a long-term sentence, reveals, “When I first came in here on a murder charge, I felt burning rage that provoked me to think of shooting everyone. The training helped me let go of that toxic rage, and I can vouch that I will never be tempted to touch a gun again.”

Over a hundred former prisoners attended the recent conclave of Unnati, only to express their heartfelt gratitude.

A few days ago, Beena received a wedding invitation from one of them, who used to be an infamous goon. “I will have a lovely wife and a new family now, I am never again walking down the dark road,” Beena recalls him promising.

How Unnati achieved the impossible?
Unnati is quite different from the regular rehabilitation programmes practised at most prisons in the country. Here the primary motto is to help the repeat offenders reset their life views, to transform anti-social tendencies into optimistic life goals. “They should start dreaming fresh dreams,” expresses Beena.

One of their highly effective exercises include the interactive sessions with life convicts. The inmates who have the potential to positively influence others, are identified and are trained to be volunteers. They describe how a moment’s mistake had robbed their lives of everything they treasured. Their narratives about the hardships of prison life, the trauma of their families, the pining wish to change the past and the guilty conscience that erodes their souls – these motivate the young offenders a lot. “It’s a beautiful life out of these iron bars. Do not come back here,” the life convicts plead the youngsters.

ALSO READ:  At ‘My Nation Food Court’ - An 'Initiative By Prison Inmates' To Serve 'Good Food'

In their addiction prevention classes, Unnati trainers ask the prisoners to calculate the amount of money they had spent on alcohol or drugs, which mostly turn out to be a large figure. Next, the prisoners are asked to share how they would have spent this money productively. “This automatically inspires them to lead a cleaner, healthier life,” she explains. Another training module addresses the common emotions a prisoner faces – ranging from anger to guilt and even depression.

The volunteers also meet up with the families and request them to stop ostracising their own boys after release. “We make them realise the power of positive support from family, and the response has been wonderful so far,” she shares.

Prof Beena Chintalapuri has also been approached to start a reformation programme for juvenile homes.

Journey with Ashoka
Beena Chintalapuri considers her selection for Ashoka Fellowship a huge honour. “My journey with Ashoka has been wonderful. They recognised my efforts and guided me at every step for practical implementation of my ideas. The Ashoka people helped me introspect, research more and come up with unique solutions – and the wonderful results are evident in the numerous lives changed,” she exclaims.

“When the people from Ashoka visited the prisons, I was amazed to see the dignity and respect with which they talked to the prisoners. Our convict volunteers were immensely inspired by their words,” she adds.

The #KhabarLive take
It is perhaps easier to advise a criminal about right and wrong, but it is a herculean task to bring a change in their mindset. With her exceptional skills, Prof Beena Chintalapuri has achieved that impossible. #KhabarLive salutes her zeal and wisdom and wishes she offers new lives to more such young men. #KhabarLive