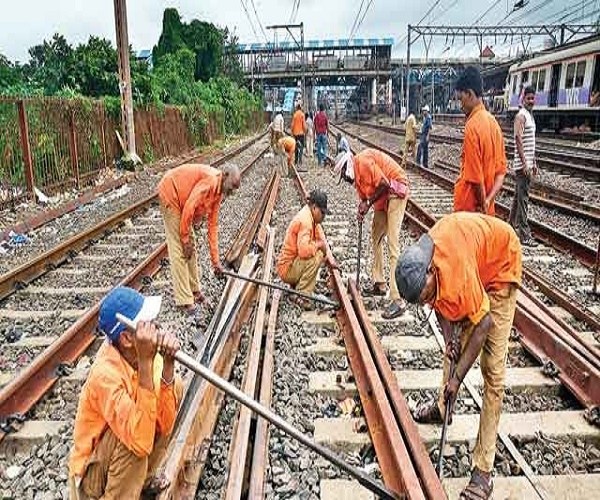 They are basically the foot soldiers of the Indian Railways. The vigil of 2.2 lakh gangmen in the Indian Railways (IR) on the tracks safeguards the lives of 2.3 crore Indians — 1.8% of the country’s population — who travel by trains every single day.They keep the railway on tracks.

Gangmen are behind-the-scene players who ensure that you reach your destination without much hiccups, alive and safe, no matter whether it is the scorching summer or while raining heavily.

Women were inducted into gangs many years now. But the South Central Railway has only now started building separate toilets and restrooms for women gang members. Currently, one out of every 20 track-maintainers in the zone is a woman. According to the latest IR data, there are 8,689 gangwomen across the country. Many were recruited on compassionate grounds — when a family member is hired after the death of an employee. For safety reasons, women track-maintainers are not given night walks.

Now, as monsoon approaches, one of the most challenging period for gangmen is round the corner, because they have to brave strong rains and rising waters in some places to keep the tracks fit for trains, we take a look at what these ‘foot soldiers of the railways’ do.

The South Central Railway (SCR) alone has about 20,000 gangmen safeguarding the lives of 10.50 lakh passengers who travel by trains every single day from Secunderabad, Kacheguda and Hyderabad railway stations.

Gangmen carry heavy equipment during their rounds to tighten nuts and bolts on the track and sometimes brave snakes and wild animals, especially in remote areas in order to correct defects on the tracks, with their duty timings mostly stretching from eight to 12 hours or even more depending on circumstances.

According to SCR officials, gangmen are the backbone of Indian Railways who work hard to ensure that rail passengers get to their destination safely and keeping this in view, the zone gives priority for the welfare of gangmen. Indian Railways 768 track maintainers were run over by trains between 2012 and 2017. Besides that, gangmen have to carry heavy equipment while doing the rounds.

A ganman carries a fish bolt spanner to tighten nuts and bolts, a tricolour lamp to alert locomotive drivers of any potential danger on the tracks and a rod weighing two kg to fix the lamp, if needed. People like him brave the vagaries of weather, snakes and wild animals, especially in remote areas, and filth on tracks to correct defects or to warn drivers of danger.

“In fact, SCR is the first railway zone in the country to introduce the safety equipment ‘Rakshak’ that helps protect the lives of railway staff working along the track. Gangmen have been provided with raincoats, LED torches, safety shoes, helmets with detachable light, winter jackets, toolkits and a host of other essential tools,” says Gajanana Mallya, General Manager, SCR.

ALSO READ:  On 'National Boss Day', Who Is Your 'Real Boss'?

Each gang has 20-25 track maintainers and is headed by a mate. Under each mate, there are two keymen who cover 6 km on foot while the rest of the gang does track-repairing duties. There will be a night patrol team as well.

During abnormal rainfall, the mate should organise patrolling. In the event of any damage being detected, action should be taken to safeguard traffic by protecting the line.

The keyman inspects the entire beat on foot once a day, both the tracks and bridges, and returns along the opposite track. On a double line, the inspection is done during morning hours.

The gangmen will soon get new gear — a raincoat, a winter jacket, a luminous vest, an ergonomically designed toolkit bag and a pair of Bata shoes worth Rs 1,400. These would be in addition to his existing dress allowance of Rs 5,000 a year.

Procurement of the special gear has started at South Central Railway, and at 15 other zones. A Railway Board notification issued on February 5 asked the zonal railways to equip every gangman better, a move that will make the railways spend Rs8,000 more annually on each person on the ground. This will cost Railways Rs 175 crore more a year.

The new goods will have to meet the specifications mentioned in the Indian Railway’s notification. The railway document, for example, has clearly specified how a winter jacket, to be brought for Rs 2,500, has to be of ‘high quality’, ‘orange coloured’ and ‘with inner lining, with or without hood’.

“The railways have decided to provide track-maintainers branded shoes. We recently contacted shoe manufacturers such as Bata, Action and Liberty and asked them to make special shoes suitable for walking on tracks,” says Vinod Kumar Yadav, general manager of South Central Railway, headquartered in Secunderabad. Yadav was the convenor of a four-member railway panel that recommended what new gear should be procured for the track-maintainers.

For the work of greasing of elastic rail clips wherever applicable, a keyman will carry a wire brush, emery paper, a duster and grease. While walking he should look for defects such as loose fish bolts or issues with SEJ fittings in switches and crossings, fittings on girder bridges and open top culverts, broken or burnt sleepers, broken plates or tie bars and attend to them before they lead to any untoward incident. #KhabarLive