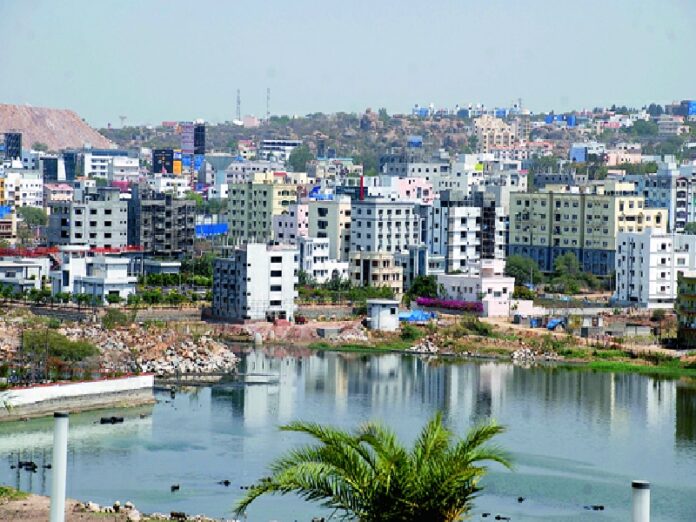 Supremo KCR’s ultimate promise of creating `Bangaru Telangana’ was almost synonymous with transforming Hyderabad into a virtual paradise. This made sense because among the key planks on which the separate Statehood struggle was based, creation of jobs and wealth could be realised mainly in Hyderabad.

Distressing images of suffering emerging from the flood-ravaged areas hardly give an impression that prosperity is round the corner. Hyderabad as a world-class city remains a Utopian concept because long-term urban planning is unappreciated or, at least, out of step with government policies.

The neglect of basic infrastructure was attributed to Andhra rulers, either of Congress or of Telugu Desam stock. They were accused of feathering their own nests at the cost of Hyderabad’s future. Besides, non-natives were allotted land at throwaway prices for building film industry infrastructure and private hospitals or they had purchased prime land for profiteering and, in at least one instance, an actor had even encroached on a lake.

The pace of development witnessed since the mid-90s was unmatched by cities of equivalent size or population like Ahmedabad, Lucknow and Bhubaneswar. Bengaluru was the only comparable city that surpassed Hyderabad. Until then, the city rested on its past glory.

Post-Independence, the Congress remained unchallenged till N. T. Rama Rao emerged on the political firmament in 1982. Its leaders milked its mineral resources, its land and bagged mega-contracts. They paid scarce attention to the needs of the city’s fast-growing population that was putting pressure on land, water, drainage, and roads leading to haphazard growth.

An individual or institution was scared of buying land in Hyderabad out of apprehensions about the genuineness of the registration papers or threat of encroachment. A Telugu film, “Ammo Okato Tareeku” has a comedy scene showing a conman selling away the Charminar to a gullible villager.

In real life, Hyderabad has a historical baggage of land records that were never scrutinised or filtered until 1936. When TS Chief Minister K Chandrasekhar Rao decided to give input subsidy of Rs. 4,000 to each farmer, he found to his dismay that the data of the Agriculture Department did not match with the revenue records. Besides, there were multiple categories of land. Nizam’s lands were known as Sarf-e-khas, while makhta and banjars were lands given away for services rendered to him. These lands were grabbed with the connivance of the high and mighty in the name of building huts for the poor.

Ibrahim Khan, who came to be known as the “king of land-grabbers”, named then Chief Minister T. Anjaiah and former Ministers G. Venkataswamy and M. M. Hashim as his partners in 1982.

This was the kind of nexus that the TRS was expected to break and usher in Bangaru Hyderabad. But, what really happened has turned out to be quite different. In these many years, land grabbing has been overshadowed by encroachment on lakes.

A concerted effort has not been made to punish encroachers, though their identity is well-known to the local communities. They enjoy political patronage of the parties in power, apart from wielding money and muscle power.

Now is the time to hold the government accountable for trying to dilute GO 111, an executive order issued way back in March 1996 to protect the Osmansagar and Himayatsagar lakes. The order prohibits polluting industries, hotels, residential colonies and other establishments up to 10 kms of their full tank level. Farmers, realtors and big builders, some of whom are close to top TRS leaders, would like it scrapped as they have already encroached on the catchment areas.

After six and a half years in power, the TRS cannot indulge in the luxury of laying the blame for the city floods at its predecessors’ doorsteps. Protecting lakes and maintenance of sluice gates is routine activity. The sluice gates of Fox Sagar lake in Secunderabad had not been opened for two decades and were so jammed that even engineers were unable to open them. It was left to a nearby automobile mechanic to open the gates, indicating official lethargy.

The Telangana High Court observed that only 10 per cent of around 3,000 lakes in and around Hyderabad had been notified. The Court’s views must be taken seriously and the audit of all lakes speedily completed.

Special courts must be established for punishing those who had encroached on water bodies to prevent recurrence of tragedies of the kind we witnessed last fortnight. #KhabarLive #hydnews