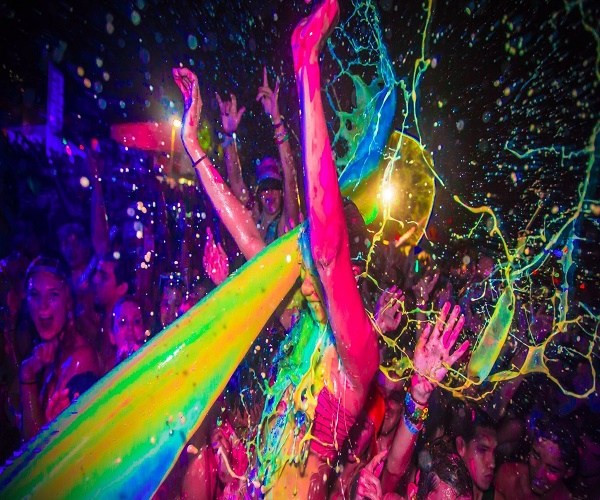 The new style twist on this Holi festival is getting attracted by many youngsters. MDMA has been used as a party drug in India since the 1990s, but its use has spiked recently and spilled over from the party scene to festivals like Holi. For the elite Hyderabadi people, Holi is just another excuse for a farmhouse rave party.

While the age-old and socially acceptable custom of making and drinking bhang still carries on, the new Holi vice is ecstasy and other MDMAs. It’s more thrilling (illegal), more expensive and much more exclusive.

When you walk into one of these farmhouse Holi parties, you will often find groups of people covered in colour and muck, swaying euphorically to techno-infused, bass-boosted Bollywood tracks. You may find this euphoric energy to be almost odd, as if it were artificially induced – and it is. The euphoria either comes from bhang or MDMA.

The latter is becoming fairly common, with ease of accessibility to the drug and the curiosity of the rich for new forms of psychoactive adventures. And what better time than Holi, the so-called 420-friendly festival, to take things up a notch?

“A teeth clattering euphoria that overflows uncontrollably,” is how a friend described his experience, 45 minutes after he washed down a turtle-shaped ecstasy tablet with water at a Holi party.

“Before I took it, I couldn’t understand why everyone was being so nice to me. They were all hugging each other and dancing to Hindi music with that weird dhik-chik techno mix. But I understood it later, you just feel so much love for random people,” he said.

“Like bubbles in my brain”, described another. MDMA (also sold as ecstasy/molly), a derivative of methamphetamine, is a synthetic psychoactive drug that alters mood and perception to experience desirable effects like euphoria, emotional warmth, reduced inhibitions and increased sexual desires.

For a festival that involves community celebration with love and camaraderie, people find these effects quite fitting. Although MDMA has been used as a party drug in India since the 1990s, its use has spiked in the past 5-7 years and spilled over from the party scene to festivals like Holi.

On the other hand, the traditional party drug of Holi, i.e. bhang, an edible preparation with cannabis, can increase the heart rate and induce a feeling of euphoria and excitement as well. It is often described as a cheap thrill because one can buy a bhang tablet from a government licensed shop at just Rs 2.

Bhang can bring on a feeling of paranoia and disorientation, which could become a buzzkill very quickly. With MDMA, there is a higher probability that you’ll feel like you’re having a good time as it surges Dopamine (the “feel-good hormone”), Norepinephrine (used for alertness by the body) and Serotonin (generates hormones increasing sexual arousal and trust) in the body. But it also comes with a bigger risk – that of adulteration.

MDMA in its pure form is sold (illegally) as crystals or capsule, a gram of which costs around Rs 5,000 to Rs 6,000. However pure MDMA is quite rare to ‘score’, so the drug is usually cut with other adulterants and sold as ecstasy (which come as pressed pills) and sold at around Rs 1,500 per tablet.

Their consumption could be quite dangerous due to the lack of regulation of the chemical compound, and in some cases, fatal too. Yet many enthusiasts are willing to take the risk because first, it’s cheaper than pure MDMA and second, tablets are easier to divide and share with friends than mapping out shares from a much more expensive powdered form.

MDMA can be mixed in water, does not have any stench and can be carried along anywhere without questions being raised. And bhang can be purchased from a licensed local vendor.

Another reason why MDMA is famous for being a party drug is also because it gives you the kick of energy and joy sans the feeling of aggression that can come along with consuming alcohol or another synthetic drug like cocaine. On an occasion like Holi, energy and joy are hardly seen as a red flag in someone’s behaviour, but does that make it safe? Absolutely not.

A friend of mine was parched after dancing for a good two hours at a Holi party at her friend’s farmhouse last year. She asked an acquaintance for a sip of water from a Bisleri bottle in his hand, and as a cautious party-goer sniffed it before sipping to check if it had Vodka by any chance. It didn’t. But it turned out to be laced with MDMA, which completely threw her off. The burst of unwarranted energy she got made her want to dance until her feet drilled into the ground and even when that didn’t make the energy dissipate, she unconsciously “chewed out the insides” of both her cheeks, she recalled.

But the drug’s characteristic tendency to heighten feelings of trust and sexual desire can act as an enabler for sexual misconduct and assault on Holi too. And Holi makes it easier for assaulters to hide behind colours, grease and muck, giving them anonymity.

So, does ecstasy really make Holi festivities ecstatic like it promises to? Whether the answer is yes or no, the fact is that it’s the flavour of the season. But what’s even more concerning is that MDMA and bhang usually exist together on Holi and their combined abuse can cause terrible long-term side-effects like memory impairment and mood disorders.

It took a friend almost a full year to get over the acute anxiety she developed after using these two drugs together. “I crashed. I crashed so bad that I didn’t know if I’ll ever come back. The panic attacks I got are unexplainable. It took a lot of doctor visits, therapy and nursing myself to even get back to a social space with people,” she told me.

No matter how harmless or ‘traditional’ they may seem, there are consequences of Holi raves. And oh, a pro-tip: please carry your own water to parties this Holi or make sure you drink from a sealed bottle/ fresh source. #KhabarLive