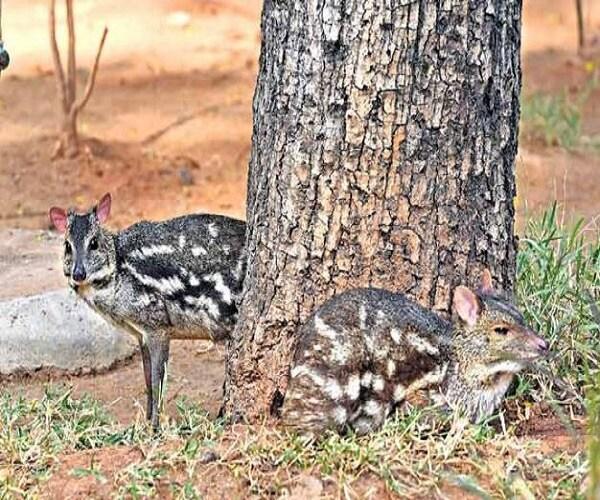 The once threatened and endangered species of Mouse Deer, known as Indian Chevrotain, has started to make a comeback, all thanks to the efforts of conservationists from Nehru Zoological Park (NZP) in Hyderabad and researchers from Laboratory for the Conservation of Endangered Species (LaCONES)-Centre for Cellular and Molecular Biology (CCMB).

The successful Indian mouse deer conservation breeding programme, funded by Central Zoo Authority (CZA) and implemented by NZP, Hyderabad has ensured that the mouse deer, as a species is thriving, healthy, genetically diverse and its numbers are on the rise.

The NZP, Hyderabad released first batch of eight mouse deer in July 2018 and later in August released another 116 mouse deer into the wild, which are being monitored closely through CCTV, camera traps and direct observations by experts. The captive mouse deer population by the end of October 2019 is at 173 individuals.

ALSO READ:  Now, You Can Travel Without Stepping Out of Your Home!

Conservation started in 2010
The conservation of the endangered and elusive species started close to nine years ago at Hyderabad zoo in 2010 with two males and four female mouse deer as founder stocks. Later on, to improve genetic diversity of the founder stock, five more mouse deer i.e. one male and two female from Tirupati, one male from Visakhapatnam and one female from Mysore zoo, were procured.

The Hyderabad zoo authorities said that the captive breeding programme has led to documentation of unique breeding behaviours of the species hitherto unknown in other ruminant species. With the help of researchers from LaCONES, and in accordance of International Union for Conservation of Nature (IUCN) guidelines, an action plan for reintroduction programme was prepared.

ALSO READ:  The Making Of Sweet Wonder - A 'Sugar Protein'

The release of the mouse deer was done after several months of preparation at the newly built soft-release facility in the Ambrabad Tiger Reserve, Kinnerasani Wildlife Sanctuary and Mrugavani National Park. Reintroduction programmes include continues monitoring of the released population through camera trap surveys and molecular identification in order to evaluate the establishment success and to inform future decisions.

Researchers said that the genetic data generated through the LaCONES research has successfully helped in identification of genetically vibrant and unrelated individuals for selective breeding, increasing numbers and subsequent soft-release of India mouse deer in the world. Based on the genetic report of LaCONES, the Hyderabad zoo officials paired more heterozygous mouse deer for breeding by the NZP, Hyderabad.

Origin and history of mouse deer
The mouse deer are an ancient species with a history dating back to Miocene era, which dates back to 25 to 10 million years ago when grazing animals were widespread. They are also called the living fossils as they have evolved very little from early Artiodactyls, which are also known as even-toed ungulates (hoofed animals). Mouse deer species are not true deer but are of great importance due to their Cervid (mammals from deer family) as well as Bovid (cattle species) like characters.#KhabarLive