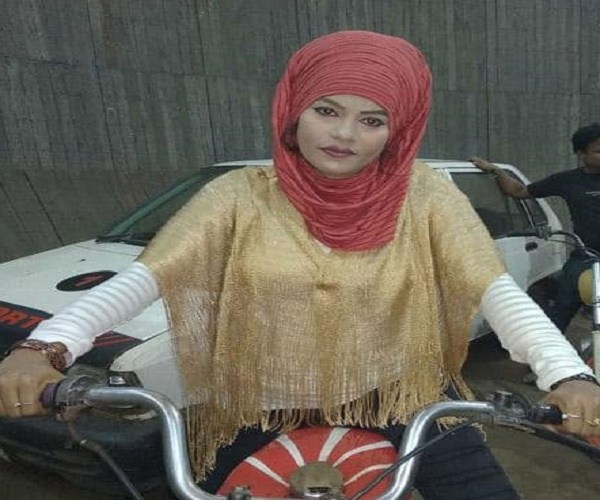 Six bikers vrooming around a well, defying gravity, performing stunts that literally has the onlookers biting their nails in anticipation of the worst—the ‘well of death’ at the Numaish fair in Hyderabad has been pulling in huge crowds. They have been coming in numbers to watch 10 people riding at breathtaking speeds, sometimes with their hands up in the air and sometimes stretching themselves over the vehicle with utmost comfort.

But this time, the operators of the Gudiya of Maruti Circus say that tickets have been selling like ‘hot cakes’ because the crowd-puller is not a man but a woman, who has been leading the daredevil acts performed inside the well of death, or the ‘Maut ka Kuan’, as it is popularly called. 26-year-old Rehana Khan from Uttar Pradesh has left the crowd at Numaish mesmerised at the ease with which she has mastered the art in an all-man’s world.

Dressed in jeans and a top, with huge brown boots and a hijab covering her face, Rehana Khan is received with huge applause the moment she enters the pit of the well, riding her Yamaha bike. She then slowly vrooms the accelerator and climbs up the silodrome before going into those tight whirls, all the while defying the laws of gravity. And if that’s not enough, Rehana can ride with both hands outstretched and off the handle, with her legs criss-crossed and can also balance the vehicle by lying over it, with no apparent sign of any discomfort.

The show doesn’t stop here. Rehana next comes in a car, waving hands at the audience and then climbs on top while the vehicle is till zooming around the circular wooden well. The show continues for a good 10 minutes and as the riders begin climbing down, the spectators heave a sigh of relief, who till then literally have their hearts in their mouths.

Rehana has been in Hyderabad for the past 45 days and says she will be heading home straight after the wrap because she misses her 5-year-old child.

“I do not bring my son to watch any of my shows. I am afraid he might get scared. We only make him watch the stunts on a mobile phone,” Rehana says.

For Rehana, the journey from a small town in Uttar Pradesh to being a woman bike performer hasn’t been easy. To convince my family, who even had reservations about sending women for jobs, to accept a profession that still lies beyond the realms of a woman, was quite arduous, Rehana says to #KhabarLive.

It was five years ago when Rehana was watching a ‘well of death’ performance in her village that the desire to be a bike performer was born inside her.

“I was 21 years old then and already married. It was a tough time convincing my in-laws but I had my husband’s backing. Together, we convinced my family as well as his and today they totally approve of the profession I have chosen. Now they are only worried about the risk factor the job entails,” Rehana shares.

But hardships didn’t end there. After convincing the families, the next task at hand was to find a teacher, who in all probability would be a man, just to prove that Rehana being a woman had the fire in her to excel.

“By then, I had learnt to ride bikes on roads and was pretty confident that I could pull off the stunt. But I had to again prove myself to my teacher who was sceptical about a woman doing it. But when he eventually saw that I was a good rider and I had the passion to do it, he agreed to train me,” the 26-year-old says.

Rehana still remembers her first stunt at a village in Uttar Pradesh and vividly recollects the fear that had filled her eyes at the sight of the large crowd.

“It was my first ride and the crowd was huge. I shuddered what if my mind goes blank and I fall down. I couldn’t believe I finished the stunt until I actually finished doing it. Since then, I have travelled to many states across the country and have been a regular performer,” she adds.

To master the stunt, Rehana says, one needs to have absolute control of the vehicle and most importantly not be afraid of heights or feel dizzy.

“Once you stop feeling dizzy while doing it, you have conquered most of the act. The trick is to maintain the speed and remain alert. The bikes aren’t pinned to the wall but rather we maintain the centripetal force that allows the vehicles to move around the curved path,” she adds.

Interestingly, these stunt bikes do not have brakes! Lack of brakes ensures that the riders do not have the urge to apply them and fall against the force maintained. Also, helmets and safety gloves are mandatory for the riders, but most of them do not prefer wearing it as it ‘spoils the look’.

While bike stunts inside the ‘well of death’ are largely performed by men, Rehana has turned it into an inspiration for many women in her village.

“There is another woman, my friend, who is now undergoing training to be a performer. If not a bike performer, I would have done some other job but made sure that I eked out a living for myself. I always tell women around me that we should begin fending for ourselves and only then will we be independent and can live in a man’s world,” Rehana adds.

When asked how it feels to be part of a group where she is the lone woman performer, Rehana puts it succinctly, ‘Proud’. #KhabarLive