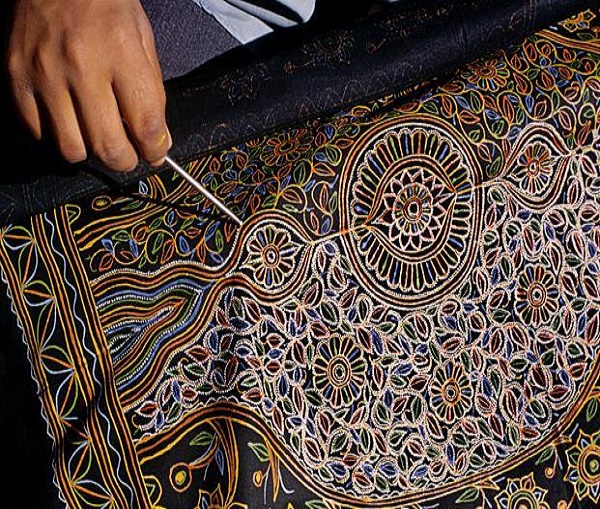 The art form has few practitioners today and survives in Kutch, where it has been handed down for generations.

Sumar Khatri sits cross-legged on the bare floor of his house. A blue plastic container that looks just like a simple spice box, found in most Indian kitchens, is lying open next to him. Inside, however, are an array of pigments soaked in water.

He works oblivious to his surroundings in what looks like a composed scene. He takes some of the yellow dye, places it on the heel of his hand and mixes it with a metal stylus.

Soon, the dye is malleable and can be stretched into a thin yellow string; it’s like a conjurer performing magic with his wand. Khatri then places a piece of fabric on his now stretched legs and then twists, turns and pulls the dye coated stylus to place a floral motif on the cloth in seconds—without the stylus touching the fabric.

He is done soon with a couple of them, after which he slowly folds the cloth. When he unfolds it, an imprint of the design is found on the other side—an exact mirror image. One look at it and anyone would be tricked by the even design of the rogan art into thinking that it’s printed work.

This is Nirona, a dusty, sleepy village near Bhuj in Gujarat where cows laze and children hop through its narrow streets. Mud houses with crumbling walls sport intricate facades that once stood majestic.

I had travelled by road from Ahmedabad the day before and halted at Bhuj, the district headquarters of Kutch, for the night. The seven-hour drive had taken me through the semi-arid zone of Kutch—acacias in the scrubland, forage grasses in the Banni grasslands, vast fields of castor and, of course, the ubiquitous salt pans. The Tropic of Cancer running across the district implies hot weather conditions and an average annual rainfall of just around 350mm.

A 40km ride from Bhuj had brought me to Nirona to meet the Khatri family, which has been carrying the torch for rogan art. “In Persian, rogan translates to ‘oil-based’. Castor oil residue is mixed with the pigments that are sourced from Ahmedabad to make these paintings devoid of any tracing. It looks like its embroidered or printed but it is actually free form,” says Jumma Khatri, Sumar’s brother.

In the courtyard of their house is 52-year-old Abdul Gaffoor Khatri, eldest of the four Khatri brothers, with deep brooding lines on his forehead, a salt and pepper beard on his chin, and clad in a fleece jacket to ward off the cold January air of Kutch. We are surrounded by children playing in the open area. While talking to Abdul—who was awarded the title of Master Craftsmen for Rogan in 1997 by the central government—I cannot help but notice his withered hands that have over the years created much magic.

“Rogan painting has its origins in Persia many centuries ago,” he explains. “It’s been in our family for the last 300 years. Currently, 10 of us are into this art—a joint family—including my son Sahil, three brothers (Sumar, Jumma and Ashraf), Shakeel (Jumma’s son), paternal uncle (Arab Khatri) and his three sons.”

How did the art form reach India from Persia? “We don’t know. But now this art is practiced only in Nirona village and nowhere else in the world,” he says.

Meena Batham, assistant professor in the department of fabric and apparel science at the Institute of Home Economics College, Delhi University, had completed her thesis on rogan art in 2014. She says, “My research took me to villages in the Kutch region in search of families where rogan art is practised. Unfortunately, I found that the current generation is not very interested in it, and hence these families have discontinued working on this art.”

ALSO READ:  The Reality Of 'Gemstones' And it's  Use In Jewellery

As Abdul said, there aren’t any records to show how this intricate art reached Indian shores. But, he adds, “There were tourists from Iran who came here and we got to know from them that these days, one cannot find anyone adept in rogan art in Iran. There was a time when it was practised in Pakistan but today this art has perished there.”

Amita D. Pandya, senior professor, department of clothing and textiles at the Maharaja Sayajirao University of Baroda, who was guide for her student’s dissertation on rogan art, says local legend has it that the Syrian Afridis brought this art to India through Persia, Afghanistan and Pakistan. In Peshawar, Lahore and Pathan, the artists used linseed oil to prepare the extract used for painting.

Unlike other crops, castor doesn’t require much water for cultivation and is easily available in the parched land of Kutch. The Khatris mix its extract with the pigments.

Abdul Khatri refuses to explain the extraction process or much about their trade secrets. “It’s a long and cumbersome task and the process is carried out in the wild in open spaces away from living areas, as the smell and smoke emitted is toxic,” is all he says.

Traditionally, rogan painting was done on quilt covers, ghagras (long skirts) and odhanis (a type of veil) worn by the local Maldhari community of Kutch. But the returns weren’t good enough to sustain the work, as its visibility was limited to Kutch, says Abdul.

Today, it is more like an art form and is known across borders. People from cities in India and overseas buy these rare paintings as wall hangings, stoles, cushion covers and saris, he adds.

Based on the time and effort taken to finish a painting—which can be from four days to around five months—the cost varies. Depending on the workmanship, the cost can cross Rs1 lakh.

The art form also shot to fame when Prime Minister Narendra Modi, during his visit to the US in 2014, gifted a Tree of Life rogan painting to the US president Barack Obama, which was made by Abdul Gaffoor himself.

So aren’t women of the house allowed to contribute to this art?

“There is a common misconception that women can’t get involved in rogan art in the Khatri community. But traditionally, since the earnings were meagre in this art, women in the family would work on bandhini, the tie and dye art,” he says.

Since 2011, with sponsorship made available (the America India Foundation paid instructors for teaching the art to the girls), Abdul has trained around 300 girls, primarily from Nirona and Bhuj. Today, 25 girls from Nirona work under the Khatris’ guidance and contribute towards rogan art.

As I walk out of their house, a dust cloud announces the arrival of a busload of tourists. I watch them alight and make a beeline for the Khatri household. I very much hope rogan art doesn’t fade and wither in the sands of time. #KhabarLive