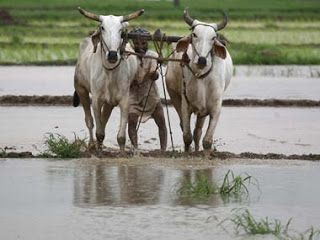 Rural India is changing and how! The obsessive focus of the media on the grievances, imaginary or actual, of urban India has virtually blinded us to developments in the ‘other India’. While the urban intellectuals have been busy pretending that it does not exist, rural India has been undergoing a dramatic change.

It is no more about idling buffaloes in village ponds, skeletal cattle in a nondescript drought-hit town, rain-starved cracked fields or about the despondent old farmer staring blankly at the empty sky for monsoon rains.

Rural India is urbanising fast with agriculture losing its predominant position in its economy. It is experiencing massive structural changes and the consumption pattern in the villages has changed gears. During 2005-2010, according to NSSO data quoted in an article in The Hindu, the number of people in rural areas below the poverty line has declined from 32.58 crore to 21.72 crore. It is sharper than the decline in urban India in the corresponding period. However, that is only part of the story. It does not quite explain other changes happening in the hinterland.

Let’s check a Credit Suisse report mapping the process of change in rural India which came out in 2012. It says:

* The transition away from agriculture has accelerated. The drop in male employment in agriculture over the past five years is equal to the shift away over the previous 27 years.

* Agriculture is the prime driver for the rural economy – this assumption is increasingly becoming invalid. A decade ago agriculture was about half of rural GDP, but it is now only about one-fourth The transition from agriculture to industry and services has been rapid in rural India over the past decade.

* Net value added (comparable to GDP) by manufacturing in rural India saw an 18% CAGR over the ten-year period of 1999-09, much faster than urban manufacturing growth, and is now around 55% of the national total.

* Urbanisation in India is progressing along a path very different from the conventional migration from villages to large cities… Instead, the number of census towns (habitats with population more than 5,000 where less than 25% of working males are in agriculture) grew three-fold, and is now half of the total number of towns.

This trend has accelerated since the middle of the last decade. As habitations urbanise, jobs migrate away from agriculture and productivity as well as awareness gets boosted by the spread of roads, electricity and phones, incomes and consumption patterns start to change as well. NSSO surveys of rural consumption have been indicating a continued trend towards a more urban consumption pattern. Spending on durables, education, consumer services (entertainment, transport, etc) and fuel has grown faster than the average in the past decade.

Economic and social dynamics are shifting gear in rural India, for the better. Like everything in India, people have discovered their own way of adapting to the challenge of change. The moves of governments – both regional and national – have started paying off. How did we miss all that? Well, truth be told, it’s not a negative story. It offers us nothing to whine about, to play political games. It is possible our universe has been limited to where television cameras go. Also, the new developments disturb our settled understanding of rural India, which we still believe is about bullock carts and lazy buffaloes. We love to stay cocooned in our set of beliefs.#KhabarLive