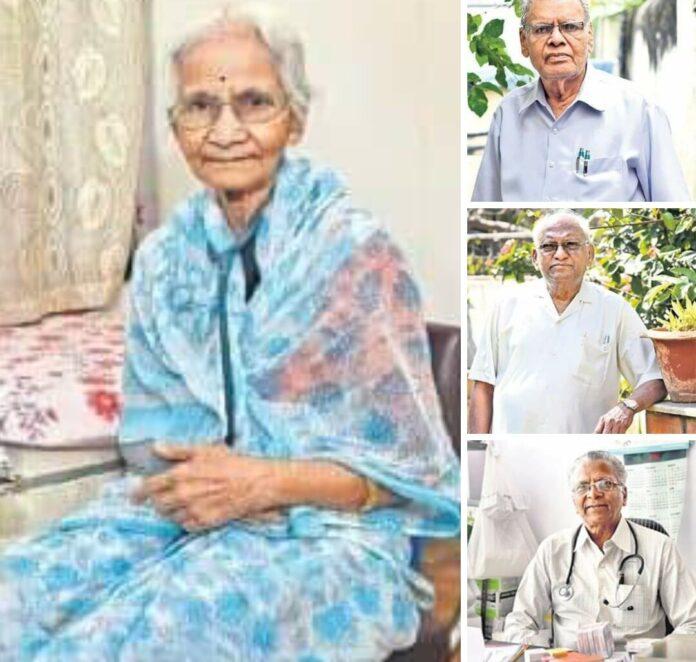 Being good with personality and good to society makes the person on high image. It is believed that being a doctor is an earning profession but these doctors prove it wrong with their selfless service for decades together.

Meet these few good doctors in the city who have prioritised service over money for decades together. Serving from the time when people had a family doctor to today when one doesn’t even know who the doctor treating them is, these doctors stand out bringing innumerable success stories.

Proving that age is just a number, they find pleasure in treating the public with a lot of patience that many lack in today’s world. Here are a few doctors in the city who have been serving for countless years and are still serving challenging the age with their winning success stories.

Dr Suri Srimathi, 86 years
Gynaecologist
“I earn enough to put food on my table and that is more than sufficient for me,” says the 86-year-old Dr Suri Srimathi when asked about her selfless service to the public. This gynaecologist has been attending to patients at her abode in the lanes of Sitaphalmandi for nearly half-a-century. Rendering free service to the poor and charging just Rs 100 for the rest even in today’s world, this awe-inspiring doctor has helped bring many healthy lives to this world.

One can easily make out which is her house despite the absence of any board directing to her place, thanks to the line of patients waiting for their turn in the front room of her old-structured house.

A frame with “Sri Rama Raksha Sarva Jagat Raksha” (The whole universe is protected by Lord Rama’s grace) written on it adorns the entrance of her clinic. Sitting in a back-supporting medical chair draped in a cotton sari, the good doctor writes notes on the patient’s condition with the old style wooden pen with blue ink on one side and red on the other.

Addressing her patients as “paapa” (girl in Telugu), the doctor even scolds her patients like a caring grandmother while also giving secret recipes from the kitchen. Attending to patients even at late hours of the day with complete patience is an art that only people of yesteryear can demonstrate. “I’m born and brought up in a normal and simple family. Also, I live in the same kind of locality amid people with similar background. Maybe if I was living in Hitec City, I would have thought of making money,” Dr Srimathi says.

When quizzed on how gynaecology came her way, the doctor shares, “My mother had a desire to go abroad but my grandparents never approved it. So she wanted to send either of us abroad. When I wrote entrance exams for colleges, I got a seat in many branches but as my friends got through gynaecology, I chose it too.”

From decades together, Srimathi has become a God-like figure for many couples wishing to become parents. Apart from treating patients, the doctor has taught at several government medical colleges in the State from the 1960s. “I was teaching in Sangareddy, Karimnagar, Kurnool, Nizamabad and, lastly, at Niloufer Hospital before retiring. Now, I dedicate all my time to the patients and this clinic at home,” she shares.

Not treating her patients as just a job but closely treating with utmost dedication is what Dr Srimathi is known among people for. In an era when Caesarean is suggested to people as an easy job, this gynaecologist tries her best for a normal delivery. Her energy at such an age is very surprising to see. Young patients lose patience waiting for their appointment while Dr Srimathi sits hours long attending to patients cheerfully even at the end of the day. When quizzed about the reason for her to work even at this age, the doctor says with a smile, “My brothers keep the doors open and I answer people who approach for help in whichever way possible,” says Srimathi who stays along with her three brothers and their families.

Patients come not only from various places in the city but other States also. With an ability to converse in various languages like Marathi, Kannada, Tamil and Telugu, the doctor catches the right nerve of the patient in their own language and gives suitable treatment. With an immense satisfaction on her face, the doctor closes the doors of her house after all patients leave for the day.

Dr Laxmikanth Joshi, 84 years
General Physician
Walking slowly in a neatly pressed shirt and pant with three pens tucked in his shirt pocket, the doctor’s body language itself tells you about his discipline. “Yes madam, tell me,” he says as he sits in front of me.

The general physician, who can treat any part of the body as he worked as an assistant to several senior doctors of different branches, says he always suggests his students at Osmania Medical College that “this profession is service-oriented. If you are joining medicine to make money, this is a wrong choice of career. People want to earn what they spent for the education which brings a bad name to the profession.”

“A person may not pay you any money but will touch your feet with gratitude. It is a very satisfying feeling. Yes, money might not be there as much but it doesn’t matter. We’re not so poor to be starving for food,” the doctor shares.

Serving several patients from decades together, Dr Joshi has been a learning example for many senior doctors of those times as well. “Just a few days before I retired from Osmania in 1994, a highly diabetic patient who was unconscious due to severe jaundice, was admitted. It was a neurosurgical problem because of the jaundice. I was called when everyone thought she cannot survive. I gave it in writing that she will survive if you treat her the way I said. And soon I retired. Around 4-5 months after the incident, the lady came to my clinic to express gratitude to have taken up the charge when everyone refused. It gave me immense pleasure and this feeling cannot be gained by money,” shares Dr Joshi with a contended expression.

Sharing the changes he has seen over the time, the doctor says, “Previously, patients respected all the doctors. They caught their feet inspite of their mistakes. That gratefulness is fading with time.”

Dr Gopal Kishan, 84 years
Nephrologist
The person who initially chose to do law in his young days felt inspired on watching a film Dr. Kotnis ki Amar Kahani by V Shantaram that talked about an Indian doctor who worked in China during the Japanese invasion in World War II. “I was keen on doing something to the society since I was young. After I watched the film, I realised I can be more useful to the society by being a doctor than a lawyer and so I changed my direction and pursued medicine,” shares Dr Gopal Kishan.

Having several credits to talk about, Dr Gopal is among the first ones to perform a kidney transplant in a government hospital in the year 1982 and the ones who established the Department of Nephrology for the first time ever in then Andhra Pradesh at Osmania Hospital.

“The first kidney transplant was performed on two Hyderabadi brothers. They are probably the first or second in India to survive on minimum drugs. They still come to meet and greet me and are doing very well. For this I’m very grateful to God and my colleagues and for the service that we could render,” says Dr Gopal.

Still attending to his old patients at his clinic, the doctor also relives those memories with his patients recalling their records and experiences.

Dr Omkar Karna, 69
General Physician
Drive through the lanes of Sindhi Colony and ask for Dr Omkar’s address, there wouldn’t be a single person who doesn’t know. His popularity in the area was seen in the way people reacted when his name is taken. Sitting between bunches of different tablets and medicines, the doctor welcomes people with a radiant smile.

Declining government service at Osmania for family and starting a clinic of his own, the doctor took an oath to serve the poor beyond everything. Running his clinic from the past 45 years at Sindhi Colony and Erragadda, Dr Omkar has made a family of patients who wait hours together for his appointment. “I’m really very grateful for my patients who wait from 7:30 pm when I go to the clinic at 10:30 pm, and stay there till 3 am in peak days. I feel bad that they wait for such a long time. Though they treat me as their God, for me my patients are my God,” shares Dr Omkar.

The doctor charges only Rs 120 for consultation, and injection and medicines (if necessary) as he rarely prescribes outside medicines. The doctor is famous for the cough syrup that he gives his patients. It is believed to work wonders when the other syrups fail. When asked what the secret behind the syrup is, the doctor shares, “The person who supplies medicines to us once sent this cough syrup for me to try. It worked very well. And even today many come to me especially for the cough syrup.” #KhabarLive