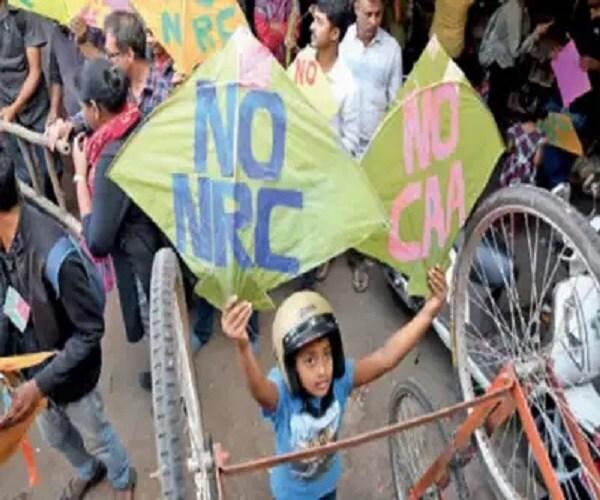 Thanks to municipal elections in Telangana and the ongoing protests against the Citizenship Amendment Act(CAA), National Register of Citizens (NRC) and the National Population Register(NPR) in different parts of the country; this Sankranthi, the sky across Telangana is dotted with many kites having pictures of TRS chief and Telangana Chief Minister K Chandrasekhar Rao as well as messages against CAA, NRC and NPR.

With elections to 120 municipalities and 10 municipal corporations in Telangana State just a week away, the ruling TRS has decided to use the kite-flying element of festival to the hilt for campaigning.

TRS working president and IT Minister KT Rama Rao has instructed the party cadre in all the districts to fly kites having KCR and TRS symbols in large numbers so as to effectively reach out to voters. Hence, local TRS leaders have placed huge orders with kite makers for supply of kites bearing pictures of KCR and TRS. These kites are being distributed to people, especially youth in urban areas for free.

The TRS party leadership feels that ‘kite campaigning’ during Sankranthi will serve as a better tool to reach out to the maximum number of voters in a short span.

The city’s Hussaini Alam, known to be the main centre for kite businesses, is witnessing kite-sellers fiercely competing with one another to keep with the trends. This year, as protests against CAA, NRC and NPR rage across the state, several kite-lovers have taken it upon themselves to make an aerial statement using kites.

While some kite-lovers are purchasing kites displaying anti-CAA, NRC, NPR slogans, others have come up with their own innovative stickers, such as “No CAA, NO NRC”, and pasting them onto their kites. Mohammed Ghouse, a kite-seller, is of the opinion that it is only natural that people have turned towards kites to express their frustration with the CAA. He said, “We are always on the look-out for new trends in the city. The kite-flying tradition is really strong in TS. I just hope our businesses go well this Sankranti due to municipal polls and anti-CAA, NRC, NPR protests.”

On the other hand, the timing of municipal elections is such that be it kites orm rangolis, everything connected to Sankranti has now got a election flavor. Minister of MA&UA, Industries and IT&CKT Rama Rao, in the company of other TRS leaders, flew a kite with the caption ‘Vote for TRS’ from the Telangana Bhavan.

Let alone door-to-door campaign and rally, now netas are using kites and rangolis to spread the word. This has gone to an extent that TRS workers in Sircilla drew a rangoli with ‘car’ (TRS party symbol) in 2 acres.

Around 200 women TRS activists celebrated Sankranti, by putting together the Rangoli at bypass road in the town of Sircilla. It took them about 3 hours to complete this Rangoli. KTR, acknowledging the effort, thanked the women for their unique way of campaigning. In fact several Rangolis have been doing rounds with images of party symbol.

Sharing them on Twitter, KTR tweeted, “Happy Makara Sankranthi to all! Many thanks to all those who are extending innovative and novel support to TRS Party candidates through Rangolis(sic)”. #KhabarLive