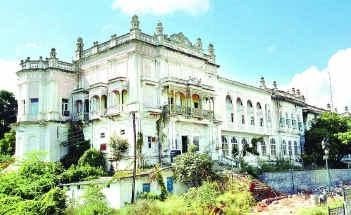 Errum Manzil or now known as Erra Manzil or Persian for mansion in paradise is an expansive palace built on a hillock by a nobleman, Nawab Safdar Jung Musheer-ud-daula Fakhrul Mulk of Hyderabad in 1870.

How about building a “mansion in paradise?” Ordinary mortals can only afford to dream of it and if one dares to take a shot, he is sure to be ridiculed for building castles in the air. But a Hyderabadi Nawab sporting a handlebar moustache dared to dream and came a whisker close to achieving one, about 119 years ago.

“Errum Manzil”, (Persian for “mansion in paradise”) the name given to the expansive palace, off the Khairatabad-Punjagutta road, by its builder Nawab Safdar Jung Musheer-ud-Daula Fakhrul Mulk, may appear a bit pompous in sync with the times. But standing on the ground, try catching a glimpse of the imposing structure, it looks closer to one.

Rising majestically from a hillock from where one can savour a commanding view of the rapidly growing urban sprawl, the palace stands out for its Indo-European Baroque style of architecture. A style known for employing a mix of features shunned by puritans. That such a style was adopted thousands of kilometres away from the place of its birth speaks volumes of the contemporary taste of the nobility of Hyderabad.

In the days of yore, the two-storeyed palace, a listed heritage building, spread over 1,13,793 square feet was full of stucco and ornamental works, had huge state, drawing and banquet halls, over 150 rooms and was furnished lavishly with Louis XVI furniture. All this is reflected in the original cost, which according to the Roads and Buildings department’s estimate, worked out to a whopping Rs. 33,41,000. A princely sum in the late 19th Century.

The palace extended up to the Administrative Staff College of India on one side, the Nizam’s Institute of Medical Sciences on the other, and almost till Taj Residency on yet another side that included a lake. This apart, the complex had a nine-hole golf course, a polo ground, a stable for about 200 horses and a dairy farm of 100 buffaloes and cows.

Now the reason for its name “Errum Manzil” is clear. “My grandfather had a passion for building palatial mansions and had an inborn talent for architecture. With the help of his walking stick he would draw an outline of the design he had in mind and expected the engineers and the masons to give shape to it. That was how Errum Manzil was built,” reminisces 90-year-old Moazzam Hussain, who was born and brought up in the palace. “He had this friendly rivalry with his contemporary, Vicar-ul Umra, the Paigah noble who built the beautiful Falaknuma and Errum Manzil was to be a perfect foil.”

The palace’s strong European leanings is not surprising. In Hyderabad’s history, Nawab Fakhrul Mulk is described as a “great admirer of the British for their character, manners and customs and the first nobleman in Hyderabad to adopt Western ways in domestic matters.”

The sixth Nizam, Mir Mahbub Ali Khan, treated him as a friend and took him to all major “durbars” and conferences outside Hyderabad State. He was a member of the Council of Regency when the Sixth Nizam was a minor besides being a Minister of the Police and Judicial Department.

By virtue of its vantage location and elaborate front yard, the palace was visible from a distance, decades ago. Not anymore with all sorts of structures and huge signboards occupying the entrance to the pathway leading to the palace. It was in the possession of the Nawab’s descendants till late 1940s, when it was taken over by the Government and used for storing records.

Then the erstwhile Government of Hyderabad purchased the building and surrounding land belonging to Nawab Fakharulmulk Bhadur when Sir Mirza Ismail was Sadar-i-Azam (Prime Minister) of the State in 1946. A sum of Rs.13 lakhs was paid for the building and 40 acres of land.

ALSO READ:  Who Is GHMC Mayor And Deputy In Sealed Envelope?

Nawab Fakharulmulk Bhadur was the first Chairman of the Hyderabad City Improvement Board and first meeting of the Board was also held in Errum Manzil sometime in the year 1913. In the year 1956, after the formation of Andhra Pradesh, the State Government quarters were constructed in the open land and the same is known as the Erum Manzil colony.

Later it was transferred to the Public Works Department and now the Roads and Buildings and Irrigation/ Command Area Development departments share it. With all their key offices beginning with the Engineers-in-chief and Chief Engineers located here, the building is the nerve centre of the two departments, accommodating over 2000 employees.

Meanwhile, The legal heirs of Nawab Fakhrul Mulk, who owned the Errum Manzil Palace in Hyderabad, have written to Telangana Chief Minister K Chandrasekhar Rao against the Telangana Rashtra Samithi (TRS) President’s decision to demolish the 1870 structure for the construction of a new State Assembly.

“Your good self is aware that Errum Manzil Palace was built and owned by the famous, eminent Nobel of Hyderabad, Nawab Fakhrul Mulk Bahadur, who was awarded a status of Umara-e-Uzzamin, in the hierarchy of the Nizam of Erstwhile Hyderabad state,” a letter from Nawab Shafath Ali Khan, the Secretary of the Nawab Fakhrul Mulk Legal Heirs Association, stated.

“Errum Manzil is a historical monument wherein top British dignitaries including the Viceroy of India had visited the palace. It is also submitted that this beautiful structure is very much part of Hyderabad’s history, culture and heritage,” the letter added.

The heirs also pointed out that the palace had served as the Public Works Department office for decades and had become such a known landmark that a metro station has been named after it.

“I would like to point out a few prominent examples of the most popular modern cities like Singapore, Dubai and Kuala Lumpur, which have preserved their heritage buildings whilst having built the most modern urban architecture around their old heritage, thereby maintaining their glory of the past amidst the present,” the letter said.

The letter demanded that the structure be saved from demolition, and be declared a ‘heritage monument’ instead.

Meanwhile, in a related development, a petition started on Change.org to ‘Save Errum Manzil’ garnered over 1,200 signatures in just two days.

“Errum Manzil is an architectural wonder and hidden gem in the busy and fast developing streets of Hyderabad, India. The palace boasts of over 150 rooms, with a golf course, horse stable, and polo ground, but is currently used as offices for government officials,” the petition states.

The petition goes on to add, “When our family graciously surrendered the property during Independence to the newly formed Indian government, we expected it to be taken care of, to be used as a remembrance of Fakhrul Mulk and his contributions to Hyderabad.”

Speaking to #KhabarLive, KCR had announced that the existing Assembly building will be preserved as a heritage structure and a new legislature complex comprising Legislative Assembly and Legislative Council will be built at Errum Manzil at a cost of Rs 100 crore.

In the online petition, the petitioner also asks the government to use the Rs 100 crore amount for conservation instead. “We ask the state government of Telangana to redirect the Rs 100-crore (over $14,000,000 USD) designated for the building of a new office structure in its place towards conservation efforts instead.”

KCR had also said the foundation stone for the new secretariat building would be laid on June 27. The complex with 5 to 6 lakh square feet space will be built at a cost of Rs 400 crore. #KhabarLive