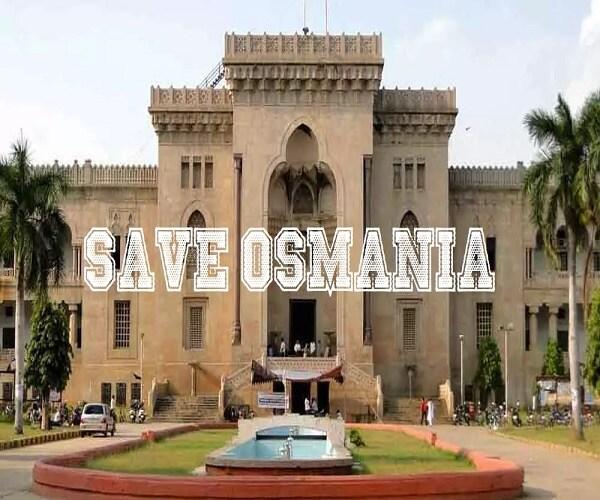 The alleged apathy and delay in appointment of Osmania University (OU) regular Vice Chancellor (VC), several students and student organisations in Hyderabad have launched a ‘#SaveOU’ campaign. As part of this, students are distributing pamphlets which talk about the historical legacy of Osmania and its present condition, highlighting the ‘crisis’. They have also launched a photo campaign on social media with #SaveOsmania.

Personifying the university as a ‘mother’, the pamphlet reads, “Look at me. Take care of me. Politicians who have spent their youth and earned education in my lap have abandoned me. You should recognise that taking care of me is safeguarding the future of Telangana. Dear students, employees, teachers, intellectuals, rulers, poets, writers. Save me from my problems. Save your mother.”

With OU students meeting the university alumni who are politicians, bureaucrats, and journalists, the campaign is gaining steam.

A PhD scholar at OU and All India Student Federation (AISF) leader, Stalin said, “The university administration is dismal as there is no regular VC. The government has appointed an IAS officer who sings to the government’s tunes. Recruitment has not been done in years.”

He further added, “As the government continuously neglects fund allocation to university, there is no development. Even today, 100-year-old hostels are accommodating the students despite being in disrepair.”

According to student leaders, the university is supposed to have 1,400 regular faculty, but there are only 436 and only 1,200 non-teaching staff as opposed to 3,500. Students are demanding that the government should immediately start a fresh recruitment procedure to prevent the fall of academic grace of the university.

ALSO READ:  Get 'Airconditioner' This Summer 'On Rent' For Rs 799 A Month In Hyderabad

Kota Srinivas, President of Telangana Vidyarthi Sangam said, “As the required number of regular faculty are not there, research is affected. University Grants Commission (UGC) may strip OU of recognitions which may affect future fund allocations.”

SA David, another research scholar from the university who is part of the campaign said, “During the separate Telangana agitation, K Chandrashekar Rao (KCR) kept assuring that all the state universities will be treated on par with Central Universities.”

Following a Public Interest Litigation (PIL) from a Osmania University professor, the High Court of Telangana pulled up the state government for appointment of Indian Administrative Service (IAS) officials as VCs of universities.

Petitioner Dr S Karunakar Reddy, an assistant professor at Osmania University’s Department of Botany, sought the suspension of the circular which had made the appointments. Speaking to #KhabarLive, he said, “The appointment of IAS officers as VCs is a clear violation of the UGC rules. The VC should be an academician with considerable experience and research.”

He further added, “As there is no VC, there is no Executive Council (EC) due to which all academic functions and development activities are not seeing progress.”

Reddy feels that the delay in appointing aregular VC is also affecting the careers of the professors who are working here for several years. He said, “In the absence of an EC mechanism, someone who joined as Assistant Professor is forced to end their career in the same rank. This will also affect our salary scale.” #KhabarLive