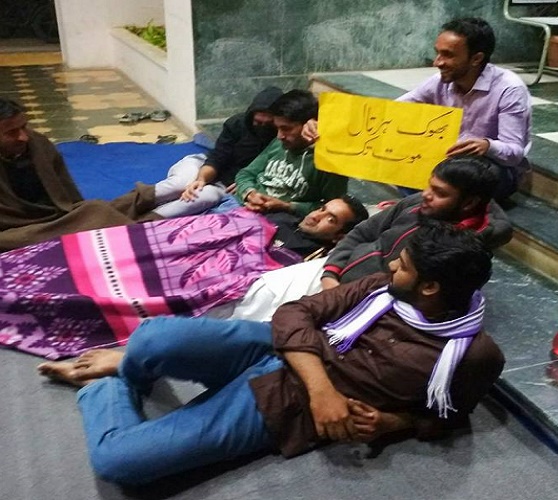 On the second day of protest over fees hike demand, about 300 students of Maulana Azad National Urdu University on staged a protest at their Gachibowli campus. Calling the administration’s move arbitrary and anti-student, they boycotted the classes and raised slogans demanding rollback of the hike.

Later in the evening, the University Students Union decided to intensify the protest with 12 students started hunger strike after the administration rejected the students’ demands to freeze hike. Union president Attaullah Niazi said the hunger strike along with the boycott of classes would continue till the administration paid heed to their demands. “The fee structure that has been imposed on us is not suitable for the students, many of whom come from economically underprivileged background and often finance their own education. Increasing the fees would become a burden on such students,” he said.

The move is particularly going to affect the women students of the varsity. The protest saw a large gathering of women also. “On one hand, the government is sloganeering to save girl child and educate her and on the other, it is not allowing them to get affordable education. A lot of girls come here because it is a minority institution and being a Central University, the fees are low. But, if you take away the affordability factor, the fights of so many girls that they had put up with their families will go waste,” rued Ayesha Jahan, a student.

Students also claimed that the administration had also disconnected the power supply and WiFi to discourage the news about the protest from spreading. “But the administration forgets the voice of dissent is stronger than they imagined,” said Bavazir, another student. #KhabarLive