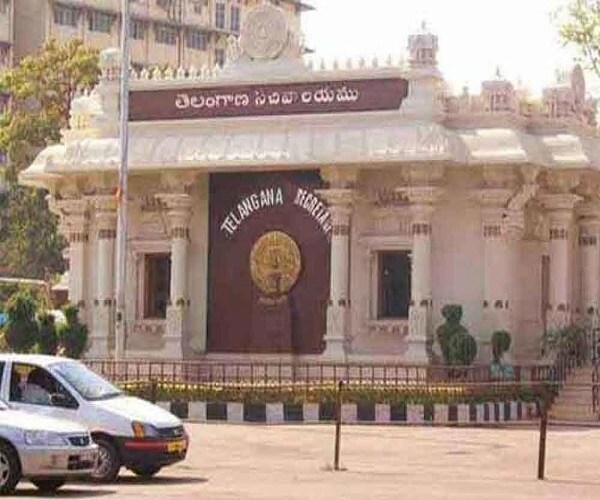 This apart, and leaving this aside, reports appeared in media that there are huge deposits of secreted treasure dating back to the Nizam’s period lay underneath the foundations and in the cellars under the old structures. It would however be known only when the old structures are demolished. Then it is better to demolish the old structures at least to benefit from the treasure!

A couple of years ago, excavation was done adjacent to the famous Vidyaranya School, in a site reportedly belonging to the Nizam, a stone’s throw away from Secretariat. A labourer found a small tunnel on the land and the news was spread till the Archaeology department officials have swung into action and excavated the area. The story thus abruptly ended there.

Newspapers then reported that the labourer found an iron gate at the tunnel. Through the grill he claimed to have found a treasure of gold coins and jewellery. He immediately contacted his friends and in turn met an official from the Coal India. They later brought the matter to the Archaeological Survey of India and then further excavations took place. What they found was not known.

Hence, whether there would be any treasure in the cellar of the old structures in Secretariat or not is a million-dollar question. In case one finds some treasure to whom should it belong is another interesting question? There is a sub plot to this story. Vidyaranya School is a monumental structure which stands as legacy to Raja Rameswar Rao, who got the land from the Nizams and built the school.

The so-called Nizam treasure was located on the school premises. Does the land where the excavations took place belong to the Raja Rameswar Rao or the Nizam (or the State government)? Who will get the right to the treasure? The then State government had done the survey with the then available latest Terrestrial Scanners and other equipment to take out the treasure. Some archaeologists found reasons to believe the story.

But no one knows what the value of the treasure found in the strong room located at the Home Science College. What happened to them? Nobody talked about it. No one knows who took away the treasure if it was unearthed! Let me narrate a personal experience, which I encountered in Mahbubnagar district, where Raja Rameswar Rao was born and was a Raja.

How a labourer told us about an old idol made of gold, how we went to the place out of curiosity and how we tried to alert the officials concerned through media and how we failed. For anyone, personal experience can be a great “kick”. Only those who experience this can understand. Not everyone gets a rare chance of landing on the Moon or scaling the Mount Everest. But they do have an experience or two to share within their limits.

This incident took place 40 years ago in October 1980. When we came to know about a hidden treasure, we formed into group and went on a fact-finding mission into the dense forests of Kolhapur in Mahbubnagar district. We went into a tunnel, nature made or manmade we did not know, but could not dare to walk long inside.

A labourer was hunting a wild boar and chanced upon entering a cave. He was scared that he was hounded by evil spirits and returned. He told his fellow labourers that he found a vast treasure of jewels, gold and other precious metals in the cave. Fearing danger to the families if they ventured again, the workers kept quiet. But one of them carried this information to then Forest Range Officer (late) KS Bhargava, whose jurisdiction Kolhapur forest range fell.

Being a good friend, Bhargava told us about it. Our group members in addition to me included, former AP State Chief Secretary J Harinarayan, his wife and history professor Jandhyala Kameswari, noted journalist late G Krishna, the then AIR Correspondent Bhandaru Srinivasa Rao and Secretary Indian Red Cross Society, AP branch late Dr AP Ranga Rao. We all went to the place in October 1980. The cave was located at a place, which is 160 kms from Hyderabad, 40 kms from Nagarkurnool and 25 kms from Kolhapur.

One has to travel for over two and half hours though the thick forests after Chintalapalli Village, which is in the east of Kolhapur to reach the place. We had only one jeep; hence we formed into two groups and reached a day before. With the help of the Forest Department subordinate staff and local labourers, it became easy for us to enter the cave in batches by afternoon. It was not an easy task to get into the cave and walk through.

The diameter of the entrance way was only one and half feet. We had to crawl for 15 feet distance and then move forward in a sitting posture and had to bend our heads at several places while entering. There was pitch darkness inside the cave and also it was airtight atmosphere.

May be that was a limestone formation. We could not bear suffocation and hence returned. We also found some pieces of broken pots. But we could not find any treasure as reported by the workers. Though it did not have any archaeological significance, it had some interesting aspects for the geologists.

They should also study about the natural cave formations and how the formation of limestones took place. This can be transformed into a tourist centre. Jatraprolu junction is only 13 kms away from this place. Several temples at Jatraprolu are being renovated as they were submerged due to Krishna waters from the Srisailam.

The distance between this place with caves and Jatraprolu is 35 kms only. I brought this matter to the then government through a letter. I have no clue as to how the place is transformed now. When someone says there is a treasure somewhere, notwithstanding whether it is there or not, certainly some interesting facts may surface.

Whether treasure was found on Vidyaranya School premises, or some treasure will come to light after the demolition of old buildings in Secretariat is a million-dollar question. In any case, I cannot forget the dinner hosted by the local tribals of Pedavota in their village on the banks of their local stream during our treasure hunt expedition! #KhabarLive