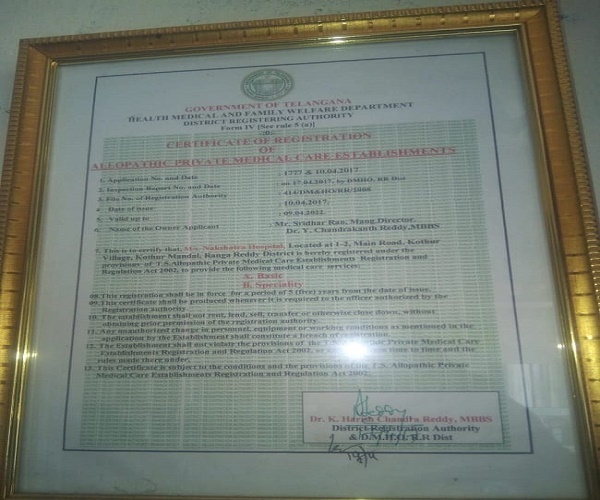 A doctor in Hyderabad has filed a police complaint against a hospital in the city’s Shadnagar area for allegedly using his MBBS certificate to get a license and registration. The doctor, identified as 25-year-old Dr Y Chandrakanth Reddy, approached the Kothur police station and filed a complaint against Nakshatra Hospital, after he was informed of the same.

“I worked at Nakshatra Hospital for 25 days in March 2017. At the time, I submitted a xerox copy of my certificates for getting the job. After I left, the hospital management, led by its Managing Director Sridhar Rao, misused my certificates to get a hospital registration from the District Medical Health Officer (DMHO) in April, without my consent or knowledge,” the complaint states.

The complainant alleged that the hospital had been running the set-up without having even a permanent doctor and with just one nurse who treats patients. He also accused the management of running an operation theatre, wards, labs and Outpatient (OP) cabins, thereby grossly violating the law.

“I want you to take strict action against all the accused, as they not only misused my certificate but also mistreated people, violated government rules and regulations, and indulged in cheating for profit. They also earned money with medical negligence,” the complaint added.

Dr Chandrakanth also shared an image of the registration certificate that has been put up at the hospital, which shows him to be one of the applicants, along with Managing Director Sridhar Rao.

Vijayender, president of the Telangana Junior Doctors Association (TJUDA), who brought the case to the attention of the media calling it criminal negligence, demanded strict action against the accused.

#KhabarLive attempted to reach out to Nakshatra Hospital but did not get a response. The hospital is yet to spell out its stand on the issue.

Meanwhile, the police registered a case under Section 420 (Cheating) of the Indian Penal Code (IPC) against the hospital and said that further investigation was underway. #KhabarLive