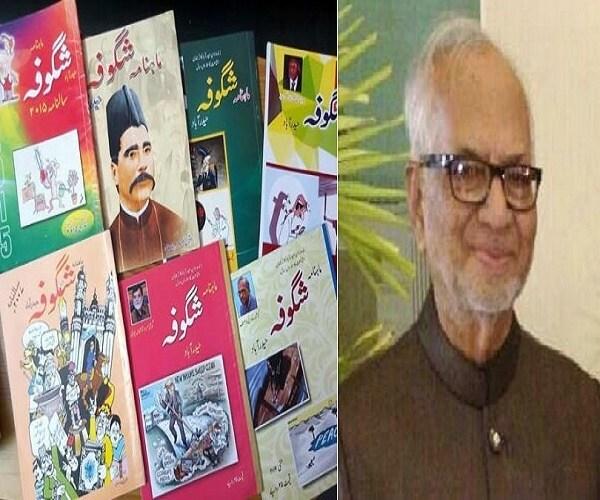 Every new idea looks crazy at first. So was the idea of a humour journal. Everyone thought he was a crank. But he knew in his heart that there is no hope for an idea if it doesn’t sound absurd at first. Dr. Syed Mustafa Kamal has proved everyone wrong with his magazine, Shugoofa, emerging as the best humour magazine. In fact it is the only mizahia periodical of its kind in Urdu in the entire country.

Running with the herd was never his idea. He wanted to be daring, be first and be different. And he succeeded. As Shugoofa entered the 52nd year, Kamal is proud – and justifiably so – to have given break to countless budding writers while making the established ones try their hand at humour. Today Shugoofa has become synonymous with tanz-o-mizah. For many happiness is sun, sand and Shugoofa in hand.

If Awadh Punch (1877-1934), published from Lucknow, played a key role in the evolution of humour and satire during the British rule, post Independence it is Shugoofa. Munshi Sajjad Hussain laid the foundation for decent and wholesome humour through Awadh Punch and Kamal has taken it to heights of excellence. Launched on the lines of The Punch, London, Awadh Punch was unique in that it gave a humorous touch to even headlines and news. Ordinary news also got a special treatment which made readers laugh.

However, after running for 36 years it closed down. Three years later it was again revived but it turned out to be a pale copy of the original. Finally it was curtains for the journal in 1934.

Shugoofa has broken the long running record of Awadh Punch by completing 51 years. In fact it is the best thing that has happened to the Urdu language and Hyderabad. While it gave desolate hearts a chance to smile after merger of the Hyderabad State into Indian Union, for Urdu it did a singular service by reviving a genre which was all but forgotten. The history of humour remains incomplete without the mention of Shugoofa which reflects the lively spirit of Zinda Dilane Hyderabad (ZDH).

It was actually the mizahiya mushaira presented by Qazi Ayaz Ansari on All India Radio way back in 1961 that sowed seeds of ZDH, the literary wing of Fine Arts Academy. The mushaira was so successful that next few years it was conducted with much fanfare. Later noted humour writer, Mujtaba Hussain, and Kamal decided to organise an All India Humour conference in 1966 for the first time in Hyderabad. Eminent writers like Krishan Chander, Bharat Chand Khanna, Makhdoom Mohiuddin were among those who attended it.

The conference proved to be a catalyst in reviving humour and satire. A happy fall out of this was a spurt in humour articles appearing in Urdu newspapers. A souvenir brought out on the occasion sold like hot cakes. Then the idea of a regular humour journal took shape. But many laughed at the very thought. However, Kamal took it as a challenge and proved his mettle.

Today if Hyderabad is regarded as the humour capital of India, the credit goes to ZDH and Shugoofa. The first issue of Shugoofa hit the stands on November 1, 1968. Its periodicity itself was a matter of amusement. Initially it was a ‘dedh mahi’ (published once in 45 days), and in 1973 it became a monthly. And since then it is hitting the stands without a break – come rain or shine. Over the years its office in Bachelors Quarters has become the hangout of poets, writers and artists. Well known Bollywood comedian, Mehmood, also dropped in here.

In the last half a century, Shugoofa has published 36 special issues on famous writers like Mujtaba Hussain, Talib Khundmiri, Farhatullah Baig , Mirza Ghalib , Yousuf Nazim, Narender Luther, Ibrahim Jalees, Taqallus Bhopali, Kanaya Lal Kapoor, Parvez Y Mehdi and Abid Moiz to name a few. Besides it dedicated special sections and editions to 110 prominent humorists. The Khaleej Number published in May 2004 was very popular as it focussed on humour in Gulf countries. Equally popular was the Parody Number containing famous parodies in Urdu.

The special issues on Raja Mehdi Ali Khan and Allama Iqbal were lapped up in no time and there was demand for more copies. As Shugoofa’s popularity transcended geographical boundaries, Urdu readers eagerly looked forward to its issues from US, Canada, Australia, UK, New Zealand, Middle East apart from the sub-continent. In these trouble times it has turned out to be a great stress buster.

When Shugoofa was launched there were not many humour writers to fill it. Kamal had to literary chase serious writers like Jeelani Bano, Awaz Sayeed, Atiq Shah, Nayeem Zuberi and request them to write articles in lighter vein. The result was the magazine got quality write-ups. “I have never compromised on the quality of articles”, says Kamal, the founder Editor of Shugoofa.

Many an author got a new lease of life thanks to Shugoofa. Writers like Talib Khundmiri, Habeeb Zia, Abbas Muttaqi, Maseeh Anjum, Abid Moiz are all products of this magazine. The works of a few non Urdu writers were also translated and published in Shugoofa. Interestingly, Kamal himself is not a humour writer. Basically a researcher and academician, he never tried his hand at writing. “Humour writing is not my cup of tea”, he admits.

But he has ensured that there is a balanced and healthy growth of humour. Kamal encouraged witty articles in all genres of Urdu literature. One can find articles on Inshaiya (essay), Afsana (short story), Khaka (sketch), Khud Navisht (autobiography), Aap Beeti (nostalgic anecdote),drama, parody and novel. The best part about the magazine is that one can read any issue anytime without getting bored. Even his bitter critics acknowledge the contribution of Kamal to the growth of tanz-o-mizah. Nothing succeeds like success. Shugoofa is one of a kind, and that’s real.

But no single person can take credit for the success of Shugoofa as there is always team work behind every triumphant venture. In the case of Shugoofa too host of writers have done their bit in making the magazine what it is today. Abid Moiz, who served as its overseas editor for 25 years, is responsible for Shugoofa blooming in the Arabian desert. He introduced the magazine in the Gulf country by enlisting scores of life members.

Kamal, who is now 80, is worried about the future of Shugoofa. “How long can I carry on. If I don’t find some able hands to manage it, I may have to think of winding it up”, he says with a touch of sadness in his voice. But readers ardently wish: Shugoofa hamesha shagufta rahe, Zarafat ka chashma ubalta rahe  #KhabarLive