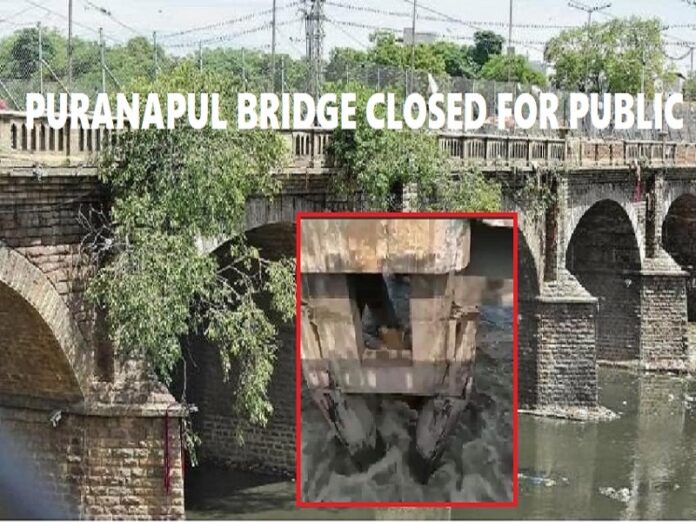 67 / 100
Powered by Rank Math SEO
Historic Puranapul, the first bridge of Hyderabad over Musi river is at the edge of collapse. The recent heavy rains, over flown river and heavy water discharge from reservoirs made the 500-year old bridge weak and unattended despite having the heritage structure tag on it.
Purana Pul bridge was closed for traffic following vibrations. The vibrations were felt after a small portion of the pillar was damaged. The traffic heading towards the bridge is being diverted through Musalam Jung bridge.
The police were alerted about the damaged caused to the pillar and immediately barricaded the bridge diverting the traffic coming from Bahadurpura and Hussainialam towards city college road. The bridge parallel to the Purana Pul bridge connects Old City with Karwan, Dhoolpet, Jiyaguda, Mehdipatnam, Asifnagar and Tappachabutra areas in Hyderabad.
Puranapul, the first bridge to be constructed in Hyderabad, lies in a sorry state with garbage strewn under it where the Musi river once flowed in all its might. While a shadow of the same still flows under slowly, the bridge has suffered a lot through the years due to negligence of civic authorities. The bridge constructed in 1528 has a row of 22 arches, around 600-feet-long, and 54 m above the river bed, writes Syed Ali Asgar Bilgrami in his book Landmarks of the Deccan.
At the end of the bridge, there is a gateway which is called the Puranapul Darwaza — one of the two surviving gateways of the old walled city of Hyderabad. With the construction of Nayapul and several other bridges over the Musi river, the old bridge has lost its importance in the civic sense and has been left to its fate. A look at the bridge would show numerous cracks on its surface and wild vegetation sprouting from various parts. With the toxic waters of Musi running below, hawkers do their daily business on the bridge since the vehicular movement has stopped.
People dump waste indiscriminately and one can spot a few pigs in the shallow waters below. As of now, the State government has embarked on an extensive cleaning process of Musi. As part of it, an official said they would take up restoration and repairs of the bridge. It is important to note that Puranapul is listed as a structure under Regulation 13 of HMDA’s list of protected heritage monuments, which the State government had earlier claimed that the law was nullified. However, during the Errum Manzil judgement, the High Court had made it clear that the provisions of Regulation 13 are still in force, thus giving Puranapul and several other structures, the status of protected monuments.
In 2002, the bridge was repaired on the eve of World Tourism Day. For a few years, the government had planned to repair the bridge, but that plan is yet to see the light of the day. During the time of the Nizams, Nawab Sikandar Jah reconstructed the entirety of the bridge after the famous flood of 1820. The superstructure of the bridge was again repaired during the reign of Nawab Mahboob Ali Khan after the floods in 1908.
The Puranapul bridge, the name itself acknowledge its historic importance, which ought to have been displayed with pride to tourists, now sports a vegetable market.
Around 200 odd vegetable and fruit vendors conduct their business on the 600 feet long and 35 feet broad bridge by paying up some money to local persons every day.  “We are doing business for last 10 years on the bridge. A few years ago we were asked to vacate the place and then we demanded alternate arrangement. Since then no official came to us,” says Sushma, a vegetable vendor.
It is said, many stone walls surrounded Hyderabad, but with the Mughal conquest they were brought down and new ones constructed in their place. Many of these were destroyed during the floods in 1908 and only two of these remain. One of them is the Purana pul Darwaza which is said to be constructed in the 15th century and the other is the Dabeerpura Gate.
From what remains of the Musi river it is indeed difficult to imagine it was a river once upon a time, leave alone the possibility of it flooding.
Digging into the history, the bridge was built in 1578, 13 years before the foundation of Charminar was laid by Ibrahim Quli Qutb Shah to provide better connectivity between the then capital of Qutb Shahi kingdom, Golconda and Machlipatnam. “It is a 438-year-old bridge and was built for better connectivity for the public. The bridge got its name as it is one of the oldest bridges,” said MA Qayyum, a historian.
However, the legend is that Prince Mohammed Quli, the younger son of Ibrahim Qutb Shah came to know that his young son was crossing the dangerously flooding river Musi to meet his love Bhagmati who lived near Charminar and he decided to construct the bridge.
The bridge was repaired on the eve of World Tourism Day on September 27, 2002 and christened ‘Pyaranapul’ (bridge of love) in memory of Mohd Quli Qutb and Bhagmati whose romance led to its construction.
A few years later, again in 2009, the corporation planned to lay cobble flooring on the bridge and make functional the Puranapul Darwaza (gate) which is one of remaining 13 gates that served as the entrance to the city. However, nothing has been done so far. It was closed for traffic as officials felt the bridge got weak and could not handle heavy traffic.
When contacted, department of archaeology and museums officials said that they cannot do anything as the bridge was not placed on the heritage list. #KhabarLive #hydnews
ALSO READ:  Activists Furore On KCR Govt's 'Demolition Spree' Of 'Heritage Buildings' In Hyderabad