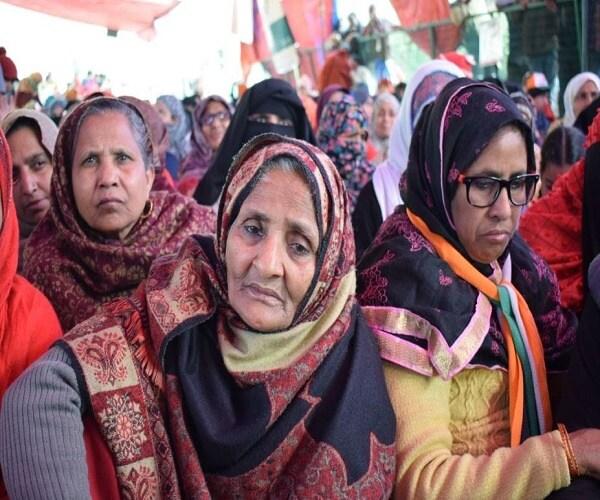 Inspired in particular by the Shaheen Bagh protest, women in towns and cities across India have stepped out demanding revocation of the Citizenship Amendment Act and a halt to the proposed nationwide Population Register and Register of Citizens. These first-time protestors say they aren’t afraid, and will fight “until things get better.”

Sumbul Ahmed is a 21 year old student of psychology at Lucknow University. On any other winter day she would’ve been tucked under a warm quilt deciding whether to attend class. But now she alternates between attending classes and the protest. Both are her foremost priority. “I can’t go to the protest every day, but I go there frequently. When I do, I skip class for that day,” she says. The women-led sit-in protest at the Ghanta Ghar in Lucknow started on January 15, and has been going strong now for 25 days.

Shahana Kausar joined the anti CAA and NRC protest at the Mansoor Ali Park in Allahabad. A mother of four, Kausar completes her daily household chores and joins the protest around 10pm. “We remain there till 2am, sometimes even 4,” she says. To ensure that household chores don’t lag behind, Kausar and her sister-in-law attend the protest on alternate days.

She says, “This fight is for our children and the future generation. We’ve already lived half our lives, now is the time for our children. If the environment remains so volatile, how will they survive? It’s a fight for a safe and secure future for them.”

She worries. “Each and every child cannot move out of this country just because it’s unsafe. There are such good universities in the country, why should they even leave?” Kausar believes the fight is a long one, but she will not give up.

At the Sabzi Bagh protest in Patna, Salma Noori says that for a mother no one and nothing is greater than her children. “All the students of Jamia and JNU are our children. We are fighting for them and for our rights,” she says.

Noori shares that she along with her husband had decided to visit students of Jamia Millia Islamia in Delhi which was the site of extreme police brutality on December 15. “We can’t do anything, but at least we can go and stand by them,” she says.

However, they were unable to go, so now she and her husband visit Sabzi Bagh every day to register their protest. Being a housewife, she says that “Everything gets managed at home. It doesn’t affect the daily routine. But if the environment in the country remains like this, it will affect everyone in some way or the other.”

Around 1,000 kilometres away, at Park Circus in Kolkata, homemaker Farhat Rahman sends her 12 year old daughter to school, cooks, and joins the protest. This winter, the coldest in over a century of records, has not deterred their spirit. “We feel cold sitting at home, not here” she says.

Rahman believes it’s important for Muslim women to come out and speak up for their rights. Along with Muslim women, she says people from all religions should come and join the fight, which is not only against CAA and NRC, but against inflation, unemployment, education and other inactions of the present government.

Rahman thinks they have been a bit late in voicing their dissent. “It should’ve started at the time of demonetisation itself.”

Coming back to where it all began, Waheedan, 65, comes daily to the Shaheen Bagh protest. “I come here around 10 am and leave by around 8 in the night,” she says. With a sense of pride she adds that her grandson studies at Jamia Millia Islamia.

Sitting beside her, Kahkashan, an MA student at Jamia says “They don’t need even a single penny,” when asked about BJP leaders’ allegations that the women protesting at Shaheen Bagh are doing so for a sum of 500 rupees. “We’ve maids at our home, yet we sweep our spaces here so it remains clean.”

“This is India, not Saudi Arabia where dictatorship will work,” says Kahkashan. “It’s important to come to Shaheen Bagh, because if they can beat up students peacefully sitting in a library, they can barge into anyone’s house and kill them.”

Kahkashan is a mother of two. She drops them off at school every day and joins the protest.

While self-determination remains a driving force for these women, family support also gives a major boost to their confidence. Salma who is on medication recounts how one day she forgot to take her medicines: her husband went back home to get them while she remained at the protest site.

The women we interviewed all said their family members come to the protests along with them and raise their voice. “Even after the police tried to disrupt the Ghanta Ghar protest at Lucknow,” says Sumbul Ahmed, “my family members didn’t stop me from going there.”

“They thought they would be able to terrorise us, but we only came out stronger.” #KhabarLive