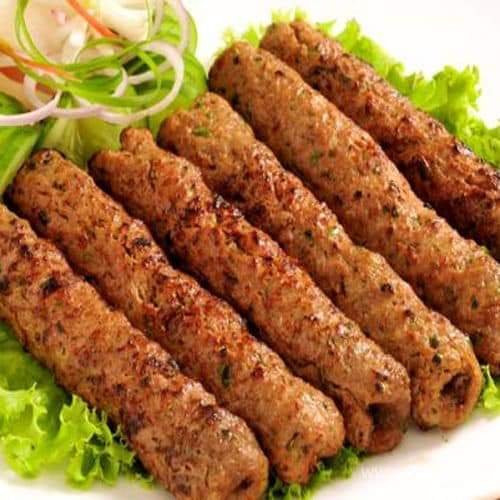 The century-old iconic eatery in Hyderabad has been selling kebabs made of chicken and goat meat after it reopened earlier this month. Customers say it’s ‘majboori ke kebab’ In Hyderabad old city area.

There is something special about a kebab, that combination of meat and vegetables skewered on a bamboo spear roasted over coals.

The smoky flavour, the fantastic array of seasonings, or just the combination of the carnivore’s favorite treat and the herbivore’s secret vice makes it a place where we all can meet.

On the eve of ‘Kebab Day’, celebrates this delicious barbecue favorite and its origins, and of course, gives us an excuse to eat all the kebab we want.

‘Kebab Day’ has been created so that we can celebrate this incredible meal! No matter whether you like to have a doner kebab after you have been clubbing with your friends or you are a fan of the shish kebab and often make them yourself, this is a day to celebrate.

Bade ka Gosht or Buffalo meat, locally known as ‘bade ke kabab’, hasn’t been much available ever since the Covid lockdown came into effect on 25 March, following which all slaughterhouses slow downed their majority shut the doors.

Mohammad Rizwan, owner of the shop located at old city chowk area in the state capital, told #KhabarLive because of non-availability of bade ka gosht, they are forced to sell kebabs made of chicken, Veg and mutton.

“Many of our old customers are still asking for the famous Hyderabadi sheek kebabs but we are offering them kebabs of chicken and mutton only. As of now, we do not know when the buffalo meat will again be available for hotels and commercial use in Hyderabad, but until then it is our compulsion to sell kebabs made of chicken and mutton,” he added.

“The biggest and most important reason (for dipping sales) is not being able to sell kebabs of buffalo meat, which is still in high demand. This apart, sales have dipped as we are now offering only take-away option due to Covid,” he added.

On Hyderabadi kebabs, Rizwan said the reason it is named ‘reshmi’ is because it melts as soon as it enters one’s mouth. He added that running the shop without selling sheek malai kebabs is like having a body without hands.

He said he uses the same recipe of kebab to make chicken and mutton kebabs, but still the taste is not the same. He also said he has never shared the recipe of sheekh kebab with anyone.

Hyderabad Kababish has five branches and the oldest shop is located in the Charminar Chowk area.

Mohammad Usman, Rizwan’s brother, who also looks after the kebab business, said the prices of kebabs have gone up as chicken and mutton are being sold at high rates.

Usman said this is also the first time in 115 years that our Kababi shops remained closed for about three months.

According to Usman, the tradition of kebab in Hyderabad was started 115 years ago by his great grand-father of Shaikh miyan, the royal chef or khansanma of Nizam’s dynasty. This is why the shop was named after ‘Shaikh’.

“We are not getting any real kebabs. My friends call kebabs made of chicken and mutton as ‘majboori ke kebab’,” he said.

Mohammed Imran, a resident of Hussainialam, said he felt extremely let down when he visited the shop and found out that it was selling chicken kebab instead of buffalo meat kebab.

“I fully concur with those who are describing chicken kebabs as ‘Baigan ke kebab’,” he added. #KhabarLive #hydnews