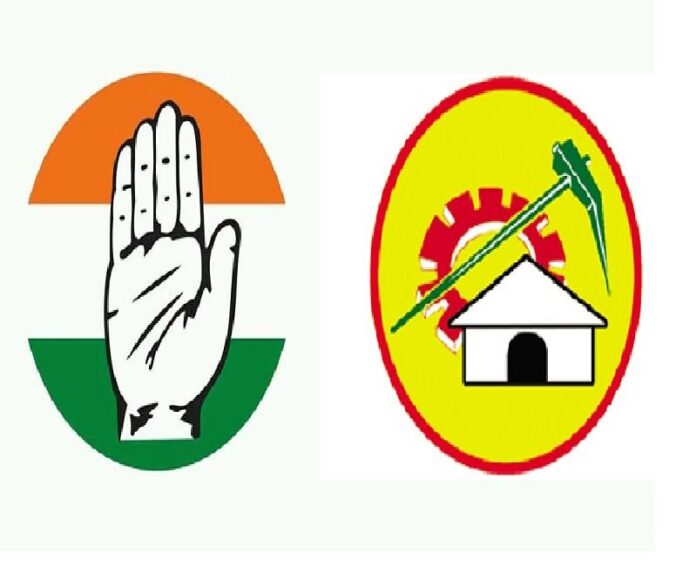 That sinking feeling, that feeling of helplessness, of impending doom, of being caught in a whirlpool and spinning out of control has been growing in intensity for diehard supporters of the Congress and TDP over the recent past in Telangana state.

These once-formidable parties had cumulatively ruled Andhra Pradesh for around three decades each, but their future now appears to be in doldrums.

Faced with a rapidly eroding base, and consequently vote bank, the TDP is fighting a losing battle while the Congress appears to have conceded defeat.

The Congress has more or less disappeared in Andhra Pradesh, and the TDP in Telangana.

Leader after leader is migrating from these two parties, believing that continuing in either party would be risking his or her political future.

In AP, some important TDP leaders have joined the ruling YSRCP while others the BJP. In Telangana, the TRS and BJP are the new havens for these disgruntled, dismayed and disappointed Congress leaders .

These migrations are dependent on local, political and caste equations, or in some cases, simply opportunistic.

The Congress too saw the departure of several former ministers, former MPs, former MLAs and other prominent leaders. After the last Assembly elections, at least five TDP MLAs and 12 Congress MLAs dumped their respective parties for greener pastures.

In AP, the TDP secured about 40 percent of the popular vote in the last Assembly elections, but this dipped to 30.73 in the recent municipal polls. Basically, this means that in the last two years, the TDP lost about 9 percent of its vote share in urban areas alone. In the rural areas, the TDP is facing a worse situation.

In Telangana, the vote bank of the Congress is also gradually eroding.

The situation is such that there is no strong opposition to the ruling party in either state.

In Telangana, the BJP is trying to occupy the space that is being conceded by the Congress, and doing its best to emerge as an alternative to the TRS. In AP, the BJP on its own, or even in alliance with the Jana Sena headed by “Power Star” Pawan Kalyan, is unable to make an impact among the people.

The TDP remains the main opposition party in AP, it has a strong base in the villages, but lacks leaders to lead or guide the cadre. Lack of proper leadership is believed to be the main reason for the TDP’s poor performance in the recent municipal elections.

Unfortunately for both the Congress and the TDP, there does not appear to be any light at the end of the tunnel; in fact, the tunnel itself seems to be endless.

Both the parties expect further desertions by ‘loyalists’ in the near future.

A recovery by either of the parties appears unlikely, or at least not easy.

While bifurcation of Andhra Pradesh has turned out to be the biggest mistake by the Congress, for the TDP, accepting the decision to divide the state, and later failure to achieve Special Category Status is haunting the TDP. #KhabarLive #hydnews