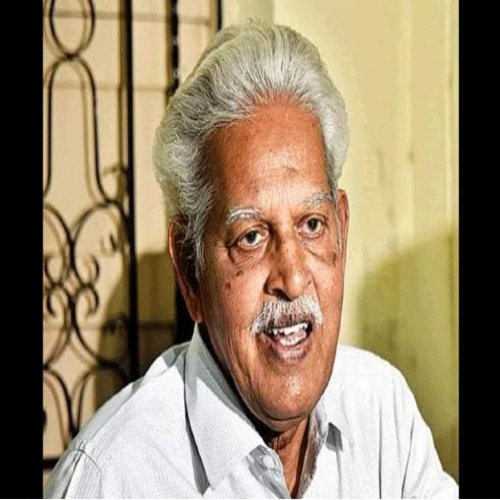 Renowned Telugu poet and activist Varavara Rao, accused in the Bhima-Koregaon case, was shifted to JJ Hospital for tests due to his ailing health. The move comes after reports of Rao’s deteriorating condition in Taloja jail, Navi Mumbai were met with massive outrage on social media by concerned citizens, activists and his family members.

The Indian Express reported the JJ hospital dean stating that they would run a few tests on Rao, who had complained of dizziness, before deciding to admit him.

Recently, academics Romila Thapar, Prabhat Patnaik among others had appealed to the Government of Maharashtra and National Investigation Agency (NIA) to immediately transfer Rao to JJ Hospital for treatment, keeping in mind his failing health.

“Mr Rao poses no flight risk and has voluntarily submitted to all investigations for the past 22 months. There is no reason in law or conscience to hold him in circumstances that increase risk to his fragile health,” reads their statement to the press.

“We have now reached a stage where his life is at stake. To knowingly risk the life of a person in state custody by refusing proper medical treatment would amount to a form of the “encounter”, an extra-legal punishment which the State institutions are duty-bound to forego,” stated Thapar, Patnaik and others—petitioners who had approached the Supreme Court regarding the arrests in the Bhima-Koregaon case.

Last week Rao had moved the Bombay High Court against the June 26 order by the special NIA court rejecting his interim bail plea on medical grounds. The high court had sought responses to the plea from NIA and the government of Maharashtra before the next date of hearing on July 17.

Rao, 81, accused in the 2017 Elgaar-Parishad case, was transferred to JJ Hospital from Taloja jail in an unconscious state on May 28. While he was discharged from the hospital and sent back to jail three days later, his family claims that his health has worsened and he is in need of emergency healthcare.

This is not the first time Rao has been in prison—a long history of incarceration precedes his most recent arrest for allegedly inciting violence in the Bhima Koregaon case in 2018.

Born in Warangal (which today falls within the boundaries of Telangana state) in 1940, Rao worked as a lecturer teaching Telugu literature for close to 40 years. He began writing poetry in 1957 at the age of 17. With 15 poetry collections to his name, Rao’s works have been translated into many regional languages.

Rao, who first turned to revolutionary ideas when he was working as a lecturer in Mahabubnagar, later developed into a renowned Marxist critic. Throughout his life, he has mounted a strong opposition to the concept of a neo-liberal state. His candid ideas, which found their way into his works—both political and literary—have infuriated the state government on many occasions. In an interview Rao explained, “Our main aim is: We shall counter the developmental model with our vision of an alternate politics, alternate culture, plus an alternate value system.”

Rao’s literary criticism has been lauded by many. He founded Sahithi Mithrulu or ‘Friends of Literature’, Srujana, a literary Telugu magazine which later reportedly began espousing “Maoist ideology”, and also formed the Thirugubatu Kavulu (Rebel Poets) in 1970, which was associated with the armed struggle in Srikakulam, Andhra Pradesh.

He also founded Virasam or the Revolutionary Writers Association in 1970, whose formation, he explained, was inspired by the Naxalbari and Srikakulam struggles. Virasam was banned by the state government of Andhra Pradesh in 2005.

Speaking about Virasam, Rao stated, “Particularly for Virasam, we don’t mince words that we are in support of the Maoist movements or the Naxalbari path or the alternate path.

This of course, as Mao says, rather casually that revolution is like washing your face, sweeping your house and facing a trial every day. To propagate this politics, we must choose, we must know the politics, we must improve the art forms, learn more from literature. However, more than anything we should learn from people and people’s forms. To adopt the visual and more often the oral forms to pass the message to the people.”

Rao was first arrested in Andhra Pradesh in 1973 under the Maintenance of Internal Security Act (MISA). Later, he was arrested during the Emergency but unlike the other prisoners who were released once the Emergency was lifted, Rao was re-arrested at the prison gates and kept behind bars for another week.

While many attempts were reportedly made on his life in the 1980s, post-Emergency, Rao survived them all, only to be arrested again in a slew of conspiracy cases.

His name cropped up in the Secunderabad conspiracy case, where he was accused of planning to overthrow the government of Andhra Pradesh along with 46 others and was arrested in 1985. He was also accused of allegedly having been a part of a meeting at Nelagopula forest where the decision to kill an Andhra Pradesh police constable and inspector was reportedly taken—more commonly known as the Ramnagar conspiracy case in which he was accused of not only criminal conspiracy, but also dacoity, attempt to murder, murder, collecting arms, spreading disaffection and sedition. He was acquitted of these charges in 2003, after 17 years.

ALSO READ:  Amidst Rifts And Squabbles Within KCR Family And TRS Leadership, Will KTR Become The Next Political Successor Of KCR's Telangana Rule?

When the Telugu Desam Party engaged in peace talks with Naxalites in 2001, Rao along with Gaddar acted as emissaries for the Communist Party of India (Marxist-Leninist) Peoples War. However, the talks proved futile and both emissaries pulled out of the negotiations citing persistent ‘encounter’ killings as the reason.

In 2004, Rao, Gaddar and writer G Kalyana Rao again acted as emissaries of People’s War group in the peace talks with the Congress party. After multiple rounds of failed talks and negotiations, with Maoists alleging that police units were staging shoot outs and killing their members, Rao’s organisation Virasam was banned in 2005.

Since the new state of Telangana was formed in 2014, Rao has reportedly been arrested four times. Over the years, Rao has faced at least nine cases under the Arms Act of 1959 and the Explosive Substances Act, 1908.

The revolutionary writer and critic was arrested on August 28, 2018 for being allegedly involved in the Bhima Koregaon violence and in an alleged plot to assassinate the Prime Minister.

In June 2018, the Pune police reportedly recovered a letter with a plan to assassinate PM Narendra Modi from the house of one of those arrested in connection with the Elgaar Parishad event on December 31, 2017, which was organised to commemorate 200 years of the Bhima- Koregaon battle.

The police alleged that Varavara Rao’s name was mentioned in the letter, to which Rao stated, “I have absolutely nothing to do with the claims made in the letter. The police cannot do anything other than arrest me and foist false cases against me. The people arrested by the Pune police had all been working for the downtrodden and the release of political prisoners. They are not involved in murder politics.”

Rao’s name emerged, yet again, when the Pune police arrested Surendra Gadling from Nagpur in the Elgaar Parishad case. Allegedly, a letter was obtained from Gadling in which Rao reportedly complimented him on the successful attack by Naxalites in Surjagad area of Gadchiroli.

Telugu poet, literary critic, translator and journalist N Venugopal wrote in 2018 that the allegations against Rao, “largely culled from letters written by other people, mirror the charges the state has repeatedly brought against him for the last 45 years – and failed to prove in a court of law every single time.”

Today, citizens across the country have taken to social media to voice their anger against the decision to keep the octogenarian poet in Taloja jail—where reportedly three inmates have already succumbed to COVID-19. Rao’s family recently alleged that the conditions in the prison are not adequate, especially for an aged individual already suffering from health conditions and at a higher risk of contracting the virus.

In a press statement, Rao’s wife P. Hemalatha and daughters P. Sahaja, P. Anala and P. Pavana stated that the once “eloquent and articulate public speaker and writer” was found “fumbling” for words and in a state of “incoherence and loss of memory” during a phone call to the family members on July 11.

Rao went into a “delirious and hallucinated talk” about the funeral of his father and mother, events that took place seven decades and four decades ago respectively. His co-accused informed the family members that Rao is unable to walk, go to the toilet or even brush his teeth on his own. In jail, Rao hallucinates repeatedly that his family members are at the prison gate waiting to receive him as he has been released.

“At the present juncture we are leaving aside all the pertinent facts like, that the case against him is fabricated; he had to spend 22 months in jail as an undertrial with the process turned into punishment; his bail petitions got rejected at least five times now and even the bail petitions with his age, ill-health and Covid vulnerability as grounds were ignored,” the family stated.

With Rao’s life being the “top most concern” for the family, they demanded that the government shift him to a better hospital or allow them to provide him with proper medical care.

“We want to remind the government that it has no right to deny the right to life of any person, much less an undertrial prisoner,” they said. #KhabarLive #hydnews