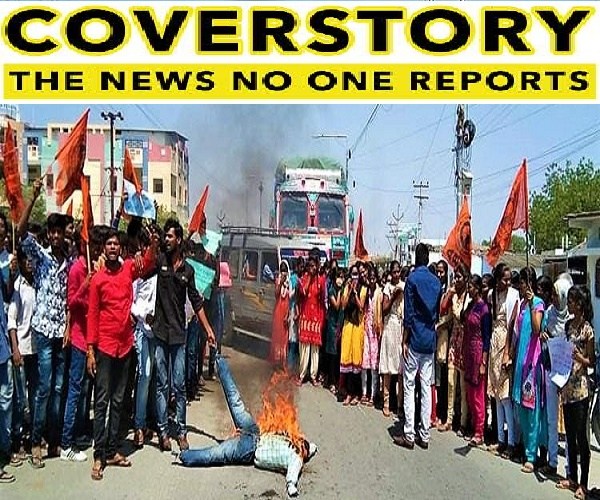 More than 10 deaths have been reported in Telangana this week and what’s pushing the student community to such heights of desperation is a combination of factors. The reason: Telangana Intermediate results fiasco.

Year after year, the Hyderabad police ramp up patrolling around the Hussain Sagar lake around the summer months. But it isn’t in search of would-be robbers or vandals. Instead, they’re looking for dejected students attempting to take their own lives.

After results for the Intermediate exams (Class 11 and Class 12 under the state board, overseen by the state government and the Board of Intermediate Education) in Telangana were released on Thursday, more than 10 students have killed themselves — a tragic narrative that repeats itself over and over again. Activists say these deaths are the result of a broken academic system that wantonly places undue pressure on students to succeed in a cut-throat environment.

Inspector B Dhanalaxmi from the Lake Police tells #KhabarLive that they have also set up police pickets at various points and increased patrolling by cycle, cars, bikes and walk as well.

“There were some cases last year. So, as a precautionary measure, we have stepped up security since the day of the results. If we do find a student who is contemplating to jump in, we first counsel the parents, then counsel the child, and hand them over back to the parents,” she says.

‘Concentration camps’
Both Telangana and Andhra witness ruthless competition in private Intermediate colleges, with institutes forcing students to study for 16 to 18 hours at a stretch under strenuous conditions. They are made to follow a rigorous time schedule, which often takes a toll on their mental health. Corporal punishment, rote learning and moral policing also thrive inside these institutions.

In many Intermediate colleges, students are segregated in batches on the basis of their academic performance, from remedial to toppers. The students can join any section they choose to as long as they pay for it, but their performances result in promotion or demotion of batches. The quality of teachers is directly proportional to the class category they belong to.

In 2007, a committee to look into the issue of student suicides was headed by M Neerada Reddy, the then Vice-Chairperson of the Andhra Pradesh State Council of Higher Education (APSCHE). After she submitted the report, she said that the students looked like “people hijacked and put in concentration camps.”

“What do you expect when the academic schedule stretches to 16 hours and sometimes up to 18 hours? Forget about recreation, students do not have time to take food leisurely,” she then told mediapersons. However, over a decade later, the report is yet to be made public.

The petition has resurfaced post the results, and has over 1,30,000 signatures at the time of writing.

Speaking to #KhabarLive, TVV state president Maddineti says, “Besides making them study for 16 to 18 hours a day, CCTV cameras are fitted in most of these hostels of corporate colleges to monitor the students. There is no freedom. Mobile phones are banned and even talking to your parents is not permitted, unless at the specific timing the management selects for you. They only give 10 minutes to speak to your own parents. Even inmates in jails have more freedom.”

Dodging legal scrutiny
In cases where the student is suspected to have taken their own lives as a result of academic pressure, the police register a case under Section 174 of the CrPC (Police to enquire and report on suicide). However, parents are often reluctant to file complaints, and institutions enjoy impunity.

Activists argue apart from a moral obligation, institutions also have a legal responsibility towards the welfare of their students. Institutes have also been pulled up by the erstwhile Hyderabad High Court (now Telangana High Court), but no action has been taken, activists say.

Achyuta Rao, a child rights activist and a former member of the State Commission for the Protection of Child Rights (SCPCR), says that there are other sections under which complaints can be filed.

“As the students are all minors, a legal argument can be made for a police case to be booked against the institutions either under Section 75 of Juvenile Justice Act, which deals with punishment for cruelty to a child due to neglect by caregiver or even abetment [to suicide],” he says.

When it comes to the two prominent Intermediate institutions, Andhra’s Municipal Minister P Narayana is the owner of the Narayana group of institutions, and the founder of the Chaitanya group is Dr B S Rao, a prominent educationist who enjoys large clout in the two Telugu states.

“There have been instances where a student has gathered courage, spoken to their parents and approached the police to file a case. But often, they are dissuaded, with officials telling them that they won’t be able to win a legal case against such big institutions. Many times, settlements are also reached,” Maddineti alleges.

“Hundreds of students have died over the decades. Why isn’t the government taking any action?” he asks.

Activists also point out that counselling before the exam and after the results should be mandatory, a recommendation that was announced by Neerada Reddy committee.

Rajendra Prasad, the Chief Coordinator of the MV Foundation, an NGO based in Hyderabad, believes that the onus is on the government. “The government is also allowing this system to thrive. They are the first culprits. They should take the initiative to reel in such practices by private colleges and improve the condition of the students. The private colleges also should have a moral responsibility,” he says.

‘Artificial competition’
Activists also say that there is intense pressure on the students to secure a high rank in the Board exams as well as tests like the state-level Engineering Agricultural and Medical Common Entrance Test (EAMCET) or the Joint Entrance Examination (JEE). Parent’s expectations also add to this pressure.

Rajendra says, “The system is also putting pressure on parents. We can’t see it in an isolated manner. Private colleges have created an atmosphere of artificial competition which is highly problematic and needs to go. There needs to be healthy competition, but that’s it,” he says.

He also puts the blame on the advertisements that institutions air after the result is declared, which boasts about students who got marks more than those from other institutions. These are constantly broadcasted on regional channels, and full-page ads are also published in all city and state editions of newspapers.

“The government should check the advertisements that the private colleges put out, because a student who performs is appreciated but the remaining are totally neglected. There is no support system for children who are lagging behind. Even their social background is not taken into consideration,” he says.

Maddineti agrees and says that advertisements adversely affect students. “Even the Neerada Reddy committee had recommended a ban on such advertising. Despite this, the institutions continue doing it each year,” he says.

The Telangana State Board of Intermediate Education, meanwhile, has stayed silent on the deaths and has said that there is a helpline for the students, which students can reach out to on 040-24600110. However, officials have reportedly admitted that the helpline largely receives queries regarding admissions and other such academic issues, rather than from students who are in need of counsellors. #KhabarLive