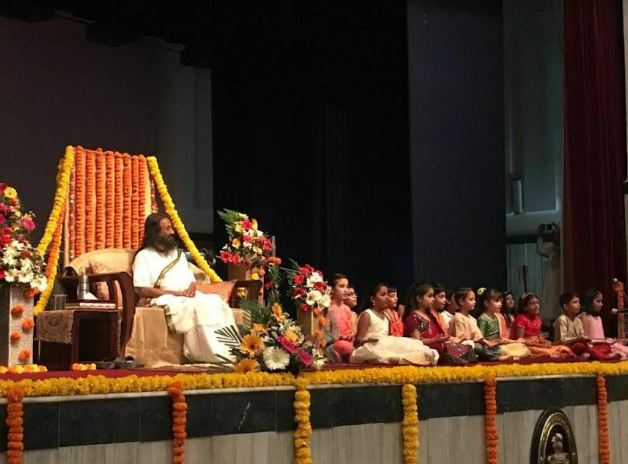 One national guru has taken a bit of a backseat these days, but the other is now in the spotlights. The last heard from Ramdev was at a Deeksha festival in Uttarakhand speaking for “gender equality” as elaborated in the Vedas, a couple of days ago. Centre stage has been occupied by Art of Living maestro Sri Sri Ravi Shankar who has been hogging the headlines—from the Babri Masjid dispute, to Kashmir, and now to Mumbai and the Navy that has not made the same waves, except quietly within the military.

Awared the Padma Vibhushan by the Modi government in 2016, Ravi Shankar regaled the Indian Navy on March 16 at a function attended by Navy brass, and their families. This was organised by HQ Western Naval Command during working/school hours on March 16 at the Mulla auditorium—the Navy’s main hall with a seating capacity of 1500. It was presided over by Vice Admiral Girish Luthra, FOC-in-C, Western Naval Command. Ravishankar spoke on meditation but the details are not available as his otherwise forthcoming site does not carry details, or for that matter photographs, of this important interaction with a strong arm of the Indian military and the Yoga Guru whose views on religion and religiosity are well known.

Ravishankar has been in the news almost ceaselessly for the past few months. He was in Kashmir recently, where he spoke to an audience of visibly sullen Kashmiris. Some left midway, others raised azadi slogans, and later reported that they claimed to have been ‘tricked’ into attending this meeting. Those present were quoted as saying that they did not know that Ravi Shankar was going to be there, and had been given different reasons to be at the venue.

This despite his supposed ‘paigham-e-mohabbat’ (message of love) where he tried to convince the Kashmiris in the midst of violence and strife, that peace was the answer. And that they should not think of the past, but only of their future. And that he would bring a wave of love and happiness for them. Perhaps they could not be blamed for walking out, with daily encounters, shut downs, protests, clamp downs, and arrests being their present reality.

ALSO READ:  The Evolution Of 'Rahul Gandhi' - A Millennial Perspective

Just before this Ravi Shankar decided to pitch in on the longstanding Ayodhya controversy. And created a storm of protest with his intervention at a time when the Supreme Court is hearing the controversial case. He said in an interview with India Today, “If Ram Mandir issue is not solved, we will have a Syria in India…Muslims should give up their claim on Ayodhya as a goodwill gesture. Ayodhya is not place of faith for Muslims…We cannot make Lord Ram to be born in another place.” He also indicated, in a report by NDTV, that the Supreme Court order on the dispute will not make a difference as the only way forward was for Musims to give up their claim to the site and build another mosque.

He said, “According to Islam, you cannot pray in a disputed site so anyway they can’t have a mosque there.” And added, “If court rules against a temple, there will be bloodshed. Do you think the Hindu majority will allow it? They will garner resentment towards the Muslim community.’’ And that an “exchange is the only solution” because if the court rules for the temple the Muslims will “feel defeated” and could “resort to extremism.” All explosive statements, at a time when the issue is before the court.

Ravi Shankar insists that he is a messiah of peace, and has resolved many a conflict not just in India but across the world. He has been pretty busy in the North East as well during the last couple of years, speaking to factions of the ULFA, promising development in Tripura, presiding over a militants surrender ceremony in Manipur, addressing legislators in Arunachal Pradesh and proclaiming support for the ‘indigenous’ people of the region.

Ravi Shankar, however, describes himself as a “man of peace” and not of politics, maintaining he stays away from politics altogether. #KhabarLive