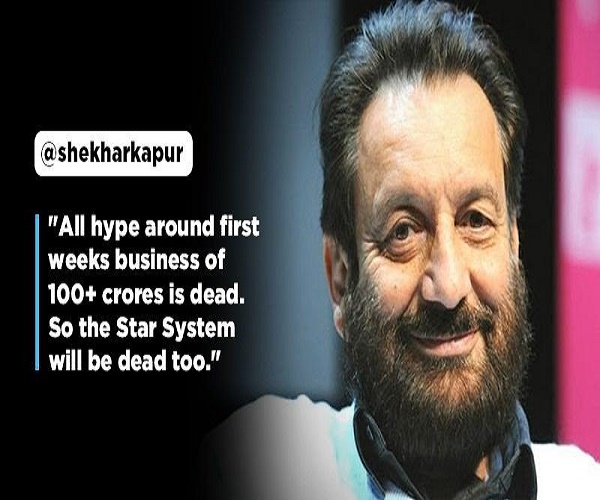 A tweet of ace filmmaker Shekhar Kapur has predicted the end of the ‘star system’, because of the closure of movie theatres during the coronavirus pandemic.

Several big-ticket Indian films, such as the sports drama 83 and the action thriller Sooryavanshi have been postponed, while others such as Dil Bechara and Gunjan Saxena: The Kargil Girl have been moved to streaming platforms.

Theatres are not going to open for atleast a year. So all hype around first weeks bussiness of 100+ crores is dead. So the theatrical Star System is dead.
Stars will have to go to existing OTT platform or stream films themselves through their own apps. Technology is quite simple

“In the current situation, OTT is the only way where people are able to consume films,” actor Nawazuddin Siddiqui, who has a couple of films headed in that direction, told a vernacular daily recently.

“Also, personally, I don’t think it really matters to actors. And honestly speaking, they shouldn’t be bothered about whether their films release on an OTT platform or in theatres. The fact that our films are able to release is, in itself, a big thing.”

Recently, in an interview, filmmaker Anurag Kashyap said that theatres are self-serving. “I think both cinema and OTT will co-exist. My thing with the theatre owners is that they think that the films that should have released in theatres and are coming out on OTT, and they are reacting to it. But the thing is when cinemas will open, there will be such a bottleneck of movies, that there will be struggling. I have suffered when Gangs of Wasseypur was nine days in cinemas and Ek Tha Tiger came out, and the film was doing well, but it was totally thrown out of cinemas.”

ALSO READ:  Many Women DJs Are Struggling To Survive In Pandemic