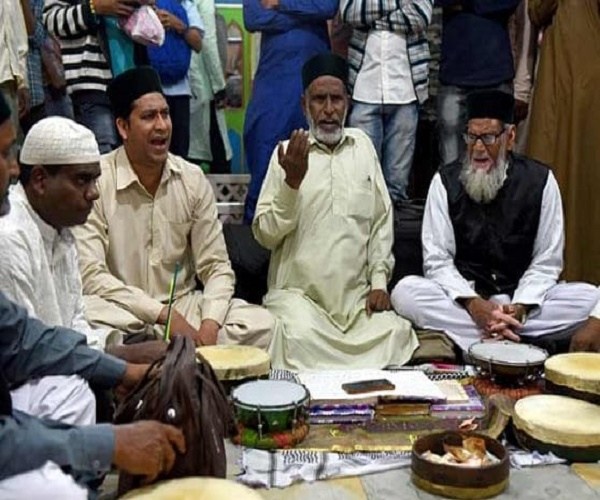 It’s Thursday afternoon and the pious courtyard of the Dargah Yousufain reverberates with Sufi music – the Qawwali. While the Qawwals render their compositions, the devotees lend an ear to the music, a traditional practice at the place.

In his early 60s, Qadir Ayyazi, one of the performers at the holy shrine, rendered the ‘Is karaam ka karu shukar kaisa aada’ composition, made famous by noted Sufi singer Nusrath Fateh Ali Khan. The visitors listen to the ‘kalam’ and praise the performers.

“I come here every Thursday and sing qawwali in praise of the Saint. Almost all artistes visit some or the other shrine in the city and sing it. It is a mark of respect to the saints and our way of making offerings,” he says.

The singer gets anywhere between Rs 600 to Rs 700 per sitting on crowded days — Thursday, Friday and Sunday — but for the rest of the week, the crowd is scarce.

“It’s not all about money. We get meagre amounts from the public for a sitting. It is about keeping the tradition alive,” says Ayyazi. Of course, he demands money for private functions or Urs celebrations.

Managements of several shrines in the city such as Baba Sharfuddin at Pahadishareef, Hazrat Jahangir Peera at Kothur near Shadnagar and a few others allow qawwals to sing on the premises.

The playing of recorded music at religious functions in colonies is robbing the income of the traditional qawwals, who usually don a sherwani over a kurta pyjama pair and turn up for the event.

“To keep the tradition alive, many of us taught the art to our children. But not all are willing to take it forward because of the uncertainty. Many are taking up different vocations,” said Syed Kamal, a singer from Shaheennagar.

There are a few from the city who have reached the next level. Naseer Ahmed Khan and his brother Nazeer Ahmed Khan of Pathergatti are acclaimed artistes. “Our ancestors — Miyan Darghai and Miyah Nizahi — were trained by Hazrat Amir Khusro, the famous poet, scholar and musician of the 12th century. Since then, qawwali has been in our blood,” says Naseer Ahmed Khan. He agrees that the appeal among the public has indeed come down. “Qawwali is more of a cultural event now,” he adds.

“More of western music is now being pumped into qawwali. The ‘real’ Sufi singers are all vanishing, and the new crop is now going in for a remix version. But still, we stress and practise the classical form,” says Ahsan Hussain Bande Nawaz of Malakpet. #KhabarLive