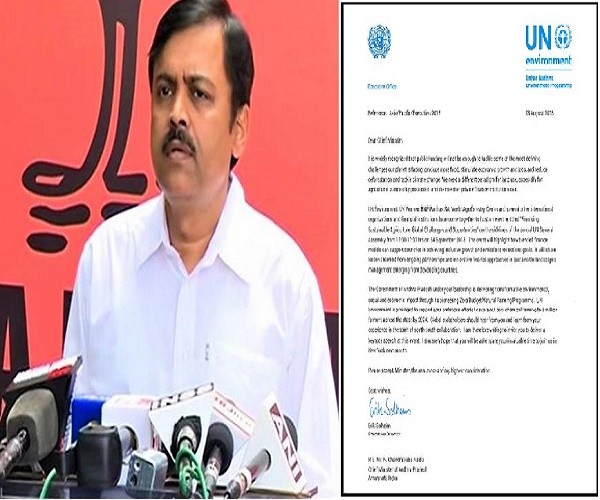 BJP MP GVL Narasimha Rao triggered a political row in Andhra Pradesh after he claimed that Chief Minister N Chandrababu Naidu, who is presently on an official tour of the United States, went there for a ‘personal’ visit.

Hours after the press meet held by GVL, the Chief Minister’s Office released an official invite letter that it had received, ahead of the event.

The letter from Erik Solheim, the Executive Director of the United Nationals Environment Programme, was dated August 23 and invited Naidu to deliver a keynote speech at a particular event.

“The Government of Andhra Pradesh under your leadership is delivering transformative environmental, social and economic impact through its pioneering Zero Budget Natural Farming Programme. UN Environment is priviledged to support your ambitious efforts to scale-out zero chemical farming to 6 million farmers across the state by 2024. Global stakeholders should hear from you and learn from your experience…I sincerely hope that you will be able to spare your time to join us in New York next month,” the letter stated.

Despite this, GVL continued to stand his ground. “Andhra CM Chandrababu Naidu to address World Economic Forum in New York City. This is being dubbed falsely by Total Drama Party (TDP) as a United Nations invite. There is a fake attempt to pass this off as a UN invite with a silly letter,” he tweeted.

He even claimed it was a ‘paid invite’. This is not the first time that the BJP MP has triggered a row.

In August this year, A bitter spat broke out on camera between senior TDP leaders and the BJP spokesperson during a discussion at Rail Bhavan in New Delhi on granting a separate rail zone for Andhra Pradesh with its headquarters at Visakhapatnam.

While it is unclear as to what triggered the war of words, at one point a TDP leader was heard telling GVL, “Why are you answering on the Minister’s behalf? You are an MP from Uttar Pradesh and nowhere related to Andhra.” #KhabarLive