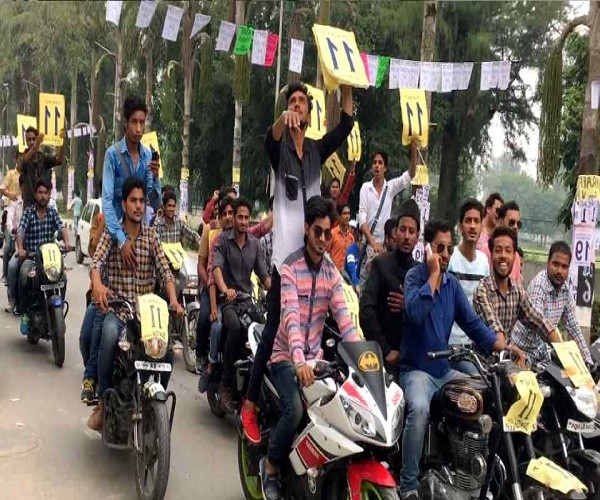 Extrapolating results of university elections into national politics won’t work as size, education levels of voters differ, as the Jawaharlal Nehru University was in news last month after the Left unity candidates swept the student body elections with huge margins.

This year, four Left parties — AISA, AISF, SFI and DSF — came together to form a coalition resulting in the Left coalition’s victory on all the four seats of the president, vice-president, general secretary and joint secretary.

The Left parties, which otherwise have strong internal differences within them, have been putting aside their ideological differences to form a united coalition in the last few years. While the united Left coalition on the JNU campus celebrated its victory, the ABVP claimed that the united Left was a proof of ABVP’s rising popularity on the campus because none of the Left parties could have single-handedly defeated it in the JNUSU elections.

On National Platform
This point is interesting because a very similar argument is heard in the national politics too where the BJP has been pointing out that the opposition unity is a necessity for the survival of many regional and national parties, which cannot afford to take on the BJP single-handedly. Although, JNU’s elections can in no way be compared to any State or general elections, this parallel between the two is fascinating.

Disturbing reports of violence from the campus post elections have raised questions regarding the necessity of student politics. The comment of Defence Minister Nirmala Sitharaman (a JNU alumnus) that there are forces within the campus waging a war against India, who were also seen with elected representatives of the students’ union, has further polarised the politics on the campus.

There are many who view student politics as unnecessary and, in fact, the student body elections in the JNU were barred for three years by the Supreme Court in 2008 as per the Lyngdoh Committee recommendations, which were opposed by the students because of their restrictive nature. Although the committee did not recommend doing away with student body elections within universities completely, it put restrictive measures regarding the conduct of university elections.

Technical details aside, the recommendations of the committee on issues like eligibility criteria of candidates, transparency in expenditure during student elections, barring candidates from re-contesting, etc, are a few things that have been opposed by students across universities.

University Politics
The quality of student politics in a university is a reflection of the overall academic and pedagogic excellence of the institution. Although the nature and character of elections across universities vary drastically, the universities which produce quality research also hold elections that are intellectually stimulating.

The JNU has been at the receiving end of trolls and media trial since the last two years. Student politicians, irrespective of their ideologies, need to re-think that whichever side is at fault, ultimately it’s damaging the reputation of their own university.

It is said that the JNU remains one of the last bastions of Left politics. Barring a few exceptions, the Left parties have usually emerged victorious in JNUSU elections year after year. However, the difference between the past and the present is that while earlier the Left parties fought elections between themselves as main contenders, this time the Left parties on the campus had to unite together, keeping aside their own ideological differences.

Waning Ideology
So, the question to be asked is whether this is a result of the Left ideology losing its appeal among the students or the fear among the Left parties to lose in the elections if they contest individually? In the last few years, it has been observed that more and more parties like AISA, AISF and SFI have been forming a coalition against the ABVP, which has emerged as the main opponent of the united Left on the campus. Now, it’s mostly about Right vs Left and both the sides take the line of, “if you’re not with us, you’re against us”

Though the results of JNUSU elections show a clean sweep by the united Left, the politics on the campus has never been as polarised as it is today. This has fundamentally changed the nature and character of student politics on the campus. The results of university elections today are extrapolated into national politics, which is a dangerous trend.

Wrong Assumptions
Today, the victory of Left or the right is seen as a vote for or against the party in power at the Centre. Politics within the campuses and student body elections should not be compared with any State or general elections. The reason being that firstly the sample of size of the voters on the campus is no match to any State elections and secondly, the education level of the voters in the JNUSU elections (where most of the voters are postgraduates, MPhil and PhD scholars) cannot be compared with the average education level of voters in any State elections.

So, the point is that neither a victory nor a loss of any political party within the campus is reflective of the mood of the young voters in general towards any political party. Therefore, to say that a Left victory on the campus represents an anti-BJP wave in national politics or the coming together of a united Left is a reflection of the Left ideology losing its appeal in general among the masses, are both wrong assumptions.

The JNU has traditionally showcased how opposing viewpoints can co-exist by critiquing, discussing, debating and dissenting against each other. These qualities prepare students to become questioning citizens and teach them the value of being democratic in their outlook. However, the violence on the campus post the JNUSU elections has raised questions regarding space for peaceful dissent within the campus. #KhabarLive