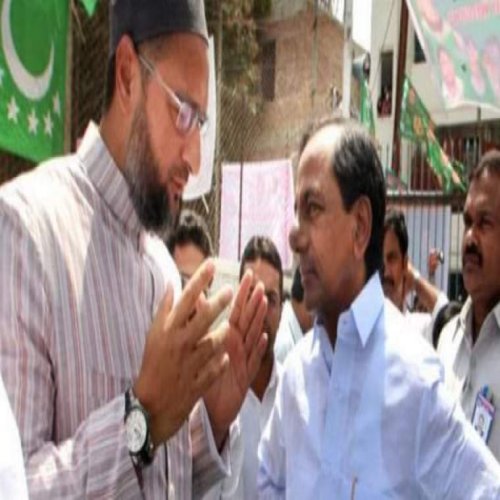 It has been said that KCR could be attempting to present himself as a soft Hindutva leader and could thus be making a show of keeping AIMIM away.

His repeated jibes at the K. Chandrasekhar Rao government have generated curiosity over the health of the TRS-AIMIM alliance.Akbar, brother of AIMIM chief and MP Asaduddin Owaisi, in a fiery speech charged at the TRS government for its reported failure in appreciating the services rendered by COVID-19 frontline workers in a note tabled by state health minster Etela Rajendar.

Signs of discomfort in the alliance surfaced during the session on another occasion. When Chief Minister K. Chandrasekhar Rao piloted a motion asking the NDA government at the Centre to confer the country’s highest civilian award, Bharat Ratna, on former prime minister P.V. Narasimha Rao, the seven AIMIM members in the house staged a walkout in protest.

The resolution adopted by the assembly sought to install a statue of Rao and his portrait in the parliament, besides naming the University of Hyderabad after him. Reacting to AIMIM’s protests sharply, the chief minister alleged that his ally was playing to the galleries, ignoring the great virtues of PV, son of Telangana’s soil.

By aligning with the AIMIM, KCR’s party had managed to garner a prize chunk of the Muslim votes in Telangana in the last two state elections and the Lok Sabha election. The two parties have become all-weather allies in the state, though the TRS chief has been accused by the BJP of appeasing Muslims. TRS is set to face a series of elections in the near future.

The by-election at Dubbaka where the sitting TRS lawmaker Solipeta Ramalinga Reddy died after testing positive for COVID-19, elections for the Greater Hyderabad Municipal Corporation (GHMC) and Greater Warangal Municipal Corporation, and MLC elections for the graduates constituencies of Hyderabad and Khammam are some of the upcoming polls. It has been said that KCR could be attempting to present himself as a soft Hindutva leader and could thus be keeping AIMIM away.

If Rao succeeds in his game plan, our party may in all likelihood ward off the BJP’s threat in the elections as Kejriwal did in the recent Delhi election,” said a TRS leader, requesting anonymity. Kejriwal’s party had cautiously ignored the anti-CAA protests at Shaheen Bagh and elsewhere, and, by doing so, it successfully countered the BJP’s plans to polarise voters on religious lines.

However, even the Muslim vote in the municipal wards where the AIMIM is not present will in no way go to the BJP. With just two seats in its kit in the previous election, the Congress is unlikely to get the Muslim vote and this is a gain for the TRS, the leader explained.In KCR’s mission, PV’s legacy and his latter’s centenary celebrations have come in handy, thanks to the inability of the Congress to capitalise on this.

Media reports suggested that KCR is likely to tip PV’s daughter Surabhi Vani Devi for the Legislative Council. Vani even went on record saying that she will accept the MLC offer if made by the TRS chief.

So what is AIMIM’s problem? PV was a disciple of Swamy Ramananda Tirtha, a pro-Hindu liberal leader of the Indian National Congress who led the liberation struggle against Osman Ali Khan, the last Nizam of Hyderabad State. Rao was rusticated from Osmania University for his association with the anti-Nizam protests.

The AIMIM, with a soft-corner for the Nizam’s rule, ideologically opposes PV for his active role in the Telangana liberation movement. He had also failed to prevent the demolition of Babri Masjid at Ayodhya as prime minister.

The election to the GHMC housing the state capital is a prestigious issue for the ruling party. GHMC constitutes a third of Telangana’s 3.5 crore population and has become a home turf for the TRS after it aligned with AIMIM. KCR has vowed to score 100 out of 150 wards in the GHMC this time.

To realise his target, TRS needs to put a dent in Congress and BJP by all means. Seeing that Brahmins constitute nearly 15% of the GHMC, projecting PV as the son of Telangana’s soil keeps the embers of regional and caste sentiment alive.

“Substituting the BJP as a champion of the cause of Hindus and presenting a public perception of clashing with AIMIM may help TRS split the Hindu vote, denting BJP’s prospects,” says Raka Sudhakar, an ideologue of the Rastriya Swayamsevak Sangh (RSS).“

Presenting a façade of rivalry between TRS and MIM leaders in the assembly is just a part of an election gimmick,” he added.Council elections worry, Syed Amin Jafri, an AIMIM leader told #KhabarLive that his party will co-exist with TRS regardless of perceptional differences. “The TRS in the past supported the NDA on note ban and GST, which we had opposed tooth and nail. Such differences will no way hurt our friendly relations,” he added.

In GHMC KCR is sitting pretty by relegating the Congress and the BJP to a near-dismal position. What is worrying him is the MLC elections for the graduates constituencies. TRS continues to pass through the rough patches in the council elections. All the candidates in the three MLC constituencies backed by TRS lost the elections in March, 2019.

The setback for TRS in the graduates’ constituencies is attributed to anger among the jobless youths. KCR led the statehood movement and subsequently came to power in 2014 on the plank of three demands — ‘neellu’, ‘nidhulu’ and ‘niyamakaalu’, meaning water, funds and jobs. But the government in the last six years has largely failed to meet the promise regarding jobs. More than 2 lakh government jobs lie vacant. In addition, KCR’s election promise of extending the retirement age for government employees from 58 to 61 has rubbed unemployed youths the wrong way. #KhabarLive #hydnews