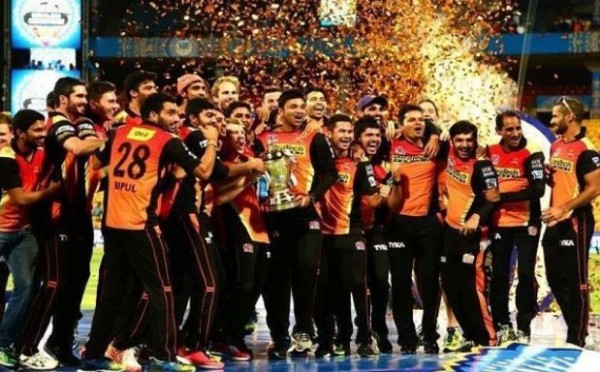 It is incredible to see how Sunrisers Hyderabad manage to win games on the back of their bowling in a batsmen-dominated game. It does not require any rocket science to gauge how badly the balance is tilted in the favour of batsmen. Runs are being scored heavily across formats and there are various aspects assisting this.

On Tuesday night, not many gave Sunrisers Hyderabad a chance to emerge victorious after posting a modest total of 118 on a batting-friendly track in Wankhede, Mumbai. The odds were in Mumbai Indians favour and a much-needed victory was about to be a perfect birthday present for Mumbai’s very own – Sachin Tendulkar, but it wasn’t to be. Sunrisers Hyderabad punched above their weight and displayed some mind-boggling bowling performances to snatch a scintillating win from imminent jaws of defeat. This was also the lowest total defended on Indian soil, which speaks volumes of the kind of efforts SRH bowlers sprung.

Sunrisers have a reputation of winning games on the back of their bowling, it department inspires confidence. Over the past three seasons, they have banked heavily on their bowling to bail them out and seldom they’ve been disappointed.

Sunrisers were on a roll after winning the first three games of the season, but two defeats after that changed the momentum. They were well on track in recording their third defeat of the season, but their bowlers came to the rescue. They have never won an IPL game in Mumbai and 118 hardly looked defendable against the star-studded Mumbai line-up.

To add to Sunrisers woes, they were without the services of their two key bowlers – Billy Stanlake and Bhuvneshwar Kumar. These two bowlers have been their pace spearheads and pillars of strength. Their loss was huge for Sunrisers, which left a huge hole to be filled, but this didn’t pull them back. It is often said, when the going gets tough, the tough gets going. Pressure often gets the best out of players, and there wouldn’t have been a more tensed situation for Sunrisers.

Their bowlers brought their A game out and ensured the job was done in the absence of the big guns. Let’s introspect their bowling in this encounter. They brought Sandeep Sharma, Mohammad Nabi and Basil Thampi into the attack, which was a smart move. This attack was not as inspiring as it was with the big guns, but very difficult to be written off. Sandeep was outstanding with the new ball and did a commendable job while Siddharth Kaul was the pick of the bowlers.

Rashid Khan has been a vital cog in this bowling attack, but didn’t have a great run in previous games. His return to form was crucial in this depleted attack and the wily leggie rediscovered his mojo at a pivotal time, further giving a testament to his character and self-confidence.

Another important thing behind Sunrisers success has been astute captaincy. David Warner proved his worth with the bat as well as the skipper of the side, he was attacking and led the side well with example. In his absence, Kane Williamson has done a fantastic job. Williamson brings his experience into use and gels well with young guns. Williamson is always brimming with energy and maintains a fearless approach. He lets the young guns express themselves at the same time ensures things are in control. On Tuesday, he rotated the bowlers perfectly and was dead right in utilising his bowlers to the fullest.

Sunrisers have also made good use of domestic talents, which has also been one of the key reasons behind their success. In last three years, 148 is the highest successful chase in Hyderabad, which is also an indication that Sunrisers have been a master in defending low totals, especially at home. It is interesting to see how Sunrisers have been consistent with the ball in this batsmen-dominated game.

T20 cricket is customarily acknowledged as a batsman’s game, runs are scored in heap here. A bowler’s life is miserable in this format as he is bound to get murdered on most of the occasions. The pitch, conditions, king-sized bats, lightening quick outfield, shorter boundaries and powerplay makes a bowler’s life arduous. But Sunrisers are a testament to the fact that wily bowling still has a place in this game and will yield fruitful results.

A side like Royal Challengers Bangalore oozes with superstars, but have had an ordinary run this season. Primary reason? Ineffective bowling. An impactful bowling is needed in this format and Sunrisers are lucky to have one. Despite having an awe-inspiring bowling attack, Sunrisers need to pull up on their batting. #KhabarLive