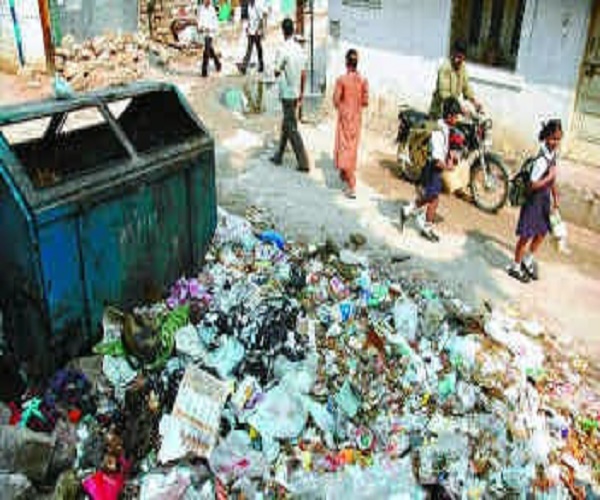 Has the TRS government’s much publicised `Swachh Hyderabad’ campaign, managed to reduce the`filth quotient’ of the city? Sadly no, true residents of the areas that Telangana Chief minister KCR and his army of officials pompously marched through during the week-long drive, promising squeaky clean surroundings to one and all.

Only days later post these visits the garbage is back in most of these residential pockets.
Atleast that’s what KhabarLive discovered as travelled through the bylanes. While the streets appeared relatively cleaner, the footpaths, garbage bins and open spaces were found to be overflowing with debris and dirt. The stench, in some places, was hard to miss either.

“There has been a garbage bin right next to my house, which has not been cleared for the past two years. Even after the CM’s visit officials have not bothered to remove it. What is the point of conducting such a campaign then?“ questioned K Pandu, a resident of Parsigutta, one of the many places that KCR had visited as part of the `Swachh Hyderabad’ drive.

Other pockets in the city too where the`cleanliness’ campaign made a pit-stop wore a similar look. The sidewalks and roads in areas such as Tobacco Bazaar, St.Ann’s main road, MG Road and General Bazaar, were found buried under piles of garbage. Predictably, residents living in and around these stretches had nothing good to say about the just-concluded drive.

“Earlier it was difficult to walk on the streets because of the filth, and now, with garbage piling up on the footpaths, we just have no place to walk,“ fumed E Merelyn, a resident of Marredpally .

There are others too who made similar observations, while lashing out at the government for conducting, what they felt, was a mere `symbolic’ drive that only made for a good photo-op for the CM! “For a colony housing 2,000 families, we have been provided with just one lorry to lift the garbage.

ALSO READ:  'Rehana Khan' - The 'Crowd-Puller' And The 'Dare-Devil Biker' Of The 'Maut Ka Kuan' At Hyderabad's Numaish

There are 62 more such colonies in the peripheral areas that are yet to be cleaned. We have repeatedly registered complaints with the municipal corporation about this issue, but to no avail.We were always told that the complaint has been referred to an officer and that he would look into the matter,“ said an outraged N Kannaiah Naidu, president of the Matrusri Nagar resident’s welfare association in Miyapur.

Naidu added, “The campaign was nothing more than an eyewash. Also, there are many lanes and bylanes that are still waiting to be cleaned.“ If that’s not all, the lane adjacent to Sanjeevaiah Park, which had been turned into a transit garbage station for the `clean-up act’, is still in a mess. Heaps of garbage were found piled up there on Sunday ­ impatiently waiting to be cleared. That the state government has been trying to clean this park for three years now, is another story .

“Dumping debris near Sanjeevaiah Park is awful, especially because it is frequented by children. This is likely to pose serious health hazards for them. Officials need to chalk out a thorough plan to clean the park and its surroundings,“ said M Padmanabha Reddy , a retired forest services officer, adding, “If officials fail to do that, it could well ring the death knell for the park.“

So, is `Swachh Hyderabad’ already heading towards a quiet burial? That’s what residents seem to believe. “Now, that the programme is officially over, I wonder where authorities plan to dispose of the garbage. We will have to wait and watch,“ said, Major Shiva Kiran, a resident of Begumpet, casting aspersions on the future of the cleanliness drive. #KhabarLive