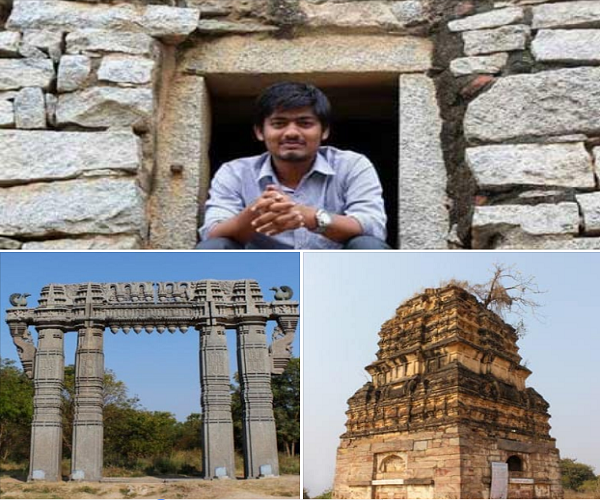 A young boy from the youngest State of India is exploring the unexplored for the past six years. Aravind Arya Pakide, a 23-year-old archaeologist from Warangal, exhibits his research at ICCR Art Gallery, Ravindra Bharathi, in association with the Department of Language and Culture, Telangana.

The photo exhibition ‘The Untold Telangana’ with a tagline ‘Tales of the forgotten past…’ is a pictorial journey into various unknown facets of Telangana. From the burials of Paleolithic period to the architectural marvels, Aravind displayed a range of monuments which captured during his archaeological excavations.

“Telangana is a treasure trove of destinations. It has developed its own culture and heritage through the historical foundations which were laid in the ancient and medieval period. Our State also gave rise to mighty empires and dynasties like Satavahanas, Vakatakas, Ikshwakus, Vishnukundinas, Chalukyas, Kakitiyas, Qutb Shahis and Asaf Jahis,” says the history enthusiast whose photographs will be on display till February 6. Aravind, who is bringing history closer to people, further says, “Telangana is not just Ramappa, 1000-pillar temple or Charminar, it’s much more.”

Praising his work, the working president of the Telangana Rashtra Samithi KT Rama Rao tweeted, “My compliments to young Aravind Arya Pakide on his stellar work in showcasing the hidden heritage site of Telangana.”

The exhibition showcases awe-inspiring symbols of Telangana which include Atmakur Ghadi in Atmakuru village constructed with over 300 rooms, sculpture of Asitanga Bhairava in Kondaparthy that dates back to the 12th century, Dolmen cross burials which date back to 5000 BC – 3000 BC, Devunigutta in Kothur, Jayashankar-Bhupalpally where pre-carved blocks of sandstone are arranged abstractly and briefing a story around the temple, Gollathagudi at Alvanpally, Jadcherala, that dates back to 8-10th century is a rare brick temple built in huge size which is just plastered with lime, and a series of arches and their evolution are a few among all the exhibited photographs. #KhabarLive