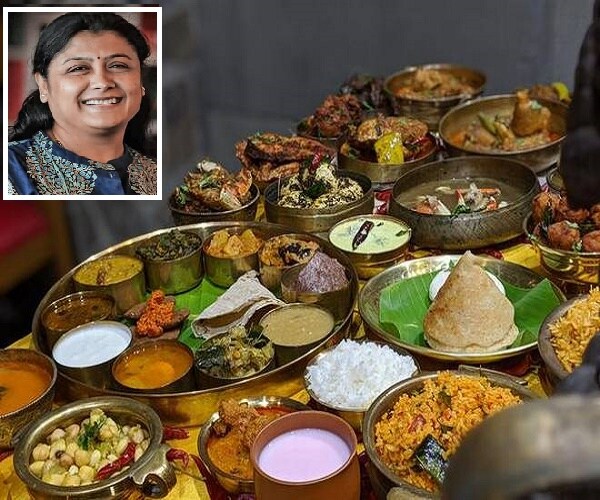 The flavours and history of this Tamil style of Rayalaseema food has long been celebrated by many generations of her family. Those who keep up with television cooking programmes will know Rajeshwarisivaprasad Puthalapattu, her soft-spoken manner and tempting dishes; so it was only right that the micro-cuisine she’s best known for is brought to the plates of the city at Rayalaseema Ruchulu.

Rajeshwari’s family has been celebrating Chittoor cuisine for many generations now and she explains it’s a necessity to keep the traditions going. “If we keep celebrating Italian or Chinese food, why not the cuisines of the different regions just as much?” the 39-year-old points out. She’s been very vocal about the domination of unhealthy milkshakes and popcorn taking over many ‘snacking routines.’

Let’s chat about Chittoor cuisine with home chef Rajeshwarisivaprasad Puthalapattu
Ask her what’s so different about the Chittoor culinary techniques and she responds, “One of the first things is that we don’t use a lot of spice… nor do we use a lot of oil. In fact, there are some people who prefer non-vegetarian dishes with more oil, but that isn’t part of the Chittoor approach.” Rajeshwari was so particular about the cooking, that she even brought over her family’s blend of ingredients to share with the diners.

The Chittoor cuisine dates as far back as 100 years and its uniqueness lies in that there are Tamil influences in the dishes: low amounts of chilli and extremely subtle dashes in coconut. The best part of this type of cooking is there’s a feast for both non-vegetarians and vegetarians, alike. There are even idli and dosa components here.

Soups are an important part of Chittoor’s meals; the crab soup comes recommended for its health benefits, says Rajeshwari. “We tend to use mud crabs as their shells are especially rich in minerals such as calcium. Crab is also beneficial to heart health for its high volumes of omega-3 fatty acids, and I’ve seen a lot of people enjoy the detoxing effect before the main meal starts.” Those with a less fishy-palate can opt for the tomato soup, which Rajeshwari has prepped as a rasam.

The venchpam pappu is the dal Rajeshwari finalised as she says it captures the spirit of Chittoor and its agriculture the best. “There are 15 pappus in the Chittoor cuisine alone,” she explains, “but it was easy to decide upon the venchpam pappu for its slight bitter aftertaste which is actually pleasant.”

She recommends the pappu to be mixed with hot white rice and ghee, and enjoyed as is. When you think rice and Rayalaseema, the immediate reference is ragi but Rajeshwari says takalipandu annam (tomato rice) and marval kodi pulao (chicken pulao) are integral to the meal.

The sabzis are worth a second helping, purely because we don’t see produce such as gorchikkudu (cluster beans) or items such as sundelu (boiled pulses) at a food festival. But authenticity is what Rajeshwari wanted here.

For the meat eaters, there are dishes many would rather eat in the privacy of their own homes but Rajeshwari doesn’t want diners to shy away: boti nanchu (lamb gizzard), nethili pakodi (fried anchovies) and kaalla pulusu (paya curry).

For those missing the fire in their bellies, Rajeshwari brings out a special karam chutney with ground onions; it packs quite a punch at the smallest pinch but the aftertaste will keep you going. To keep things balanced, the home chef offers nannari sherbath for that cooling effect while encouraging better digestion. In the hot and often arid Rayalaseema region, nannari is favoured.

At the end, gulp down some rosemilk, a favourite for those in the Rajahmundry areas.

After perusing all these dishes and their verbose names, ask Rajeshwari what her daily meal spread at home is like, and it’s not too different. “I want my family to have meals comprising different flavours and textures,” she explains proudly. “We are, after all, the ambassadors of this cuisine so it should reflect every day.”