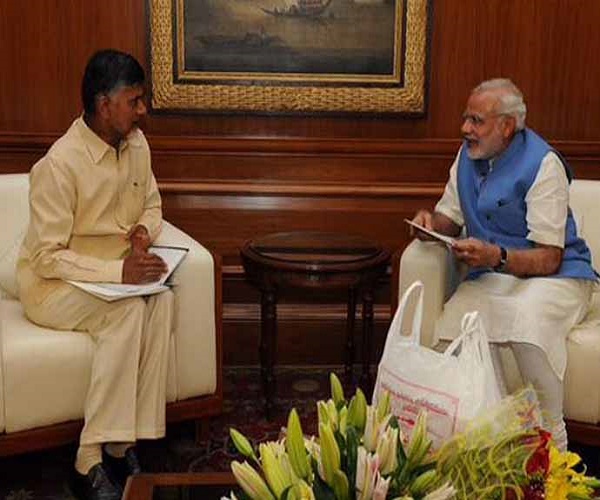 The Chandrababu Naidu-led party wants to assess BJP’s political prowess in the southern belt of the country.

Karnataka could well decide if the Telugu Desam Party (TDP) and the BJP would stay friends in neighbouring Andhra Pradesh. A significant lobby within the TDP would want Chandrababu Naidu to part ways and could have even convinced the TDP supremo to pull the plug if the BJP had lost the Gujarat elections in December 2017. However, TDP’s eyes are now on Karnataka to gauge the BJP’s political prowess in south India.

With one year to go for the elections, the TDP under Naidu believes 2019 is its election to lose. Its worry strangely is not so much the YSR Congress, the principal Opposition party in Andhra but its ally, the BJP. The TDP and BJP sail together, both in Delhi and in Amaravati. But though the TDP is a partner in the Narendra Modi government and the BJP has two ministers in the Naidu cabinet, it is an uneasy relationship. This has to do with regular pinpricks delivered by BJP leaders in Andhra against the Naidu regime who argue that the saffron party can grow only if it does not have the TDP by its side.

Naidu all along has cautioned his party colleagues not to indulge in a verbal slanging match. This is why his outburst last week, warning his partner that he is prepared to chart his own course if the BJP is not keen to continue with the alliance, is significant. His message was directed at the BJP high command to rein in its state leaders and ask them not to cross the line.

ALSO READ:  ‍Why MP Asaduddin Owaisi Commented 'Hyderabad' Will Be Made As 'Union Territory' Of India?

“Because of coalition dharma, we are keeping quiet. If they don’t want us, we will do ‘namaskaram’ and chart our own course,” said Naidu. Given the TDP supremo is extremely cautious with his choice of words and is known not to hurry with his political decisions, the BJP will know the import of Naidu’s warning.

The BJP’s morale was boosted after Amit Shah announced that Andhra, irrespective of its alliance with the TDP, will be a priority state and asked the party leaders to strengthen booth committees. Matters came to a head during the Kakinada municipal elections last year where the TDP and BJP contested together. The BJP was irked by the TDP reportedly encouraging independents in seats allotted to it. Three pro-TDP independents won in the nine seats where the BJP was contesting and supported the TDP after the results. The BJP saw this as violation of the coalition dharma.

The BJP’s charge is that the TDP gives no credit to central schemes, branding every welfare programme as its own. The grouse of TDP leaders is that the saffron party wants Modi to hog all the credit.

But it is not about local leaders alone. The fact remains that Naidu is not happy with the stingy behaviour of the central government. On more than one occasion, he has emphasised that the bifurcated state of Andhra needs handholding and generous dollops of help but it has not been forthcoming. Fund flow for the Polavaram irrigation project, which Naidu sees as the passport to a second term in office, has been anything but smooth. The chief minister climbed down from the state’s right to get special category status, after he was assured that minus the nomenclature, Andhra would get all the benefits. His inability to get it has come in for continuous flak from the Opposition.

On its part, the BJP was irked by Naidu’s decision to push a bill, giving the Kapu community 5 per cent reservation in government jobs and educational institutions, in the Andhra assembly during the Gujarat election campaign. This was because the BJP in the western state was trying to battle the fallout of the Patidar quota crisis.

Naidu’s rapport with the central BJP has also suffered a blow after Venkaiah Naidu’s elevation as vice-president. The Naidu-Naidu combination was seen as one reason why the BJP could not grow in Andhra. With Venkaiah Naidu no longer active in party politics, state leaders have taken it as a cue that they can take aim at the TDP and make their presence felt.

An irritant for Naidu also is the fact that YSR Congress leader Jaganmohan Reddy has been trying to flirt with the BJP. Jagan is open to being a BJP ally if special category status is given. The carrot for the BJP would be that Jagan may give it more Lok Sabha seats to contest from in Andhra.

The timing of Naidu’s verbal missive was significant. It came in the same week that the Shiv Sena had declared it will not fight the 2019 elections with the BJP. This when, just like the TDP, Uddhav Thackeray too is in power in Mumbai and New Delhi with the BJP.

For the BJP, this presents a dilemma. If two of its allies desert it in the run-up to its bid for a second successive term, it will be seen as an indication that its big brother attitude is not taken well by its partners. More importantly, since power is what matters most in politics, friends turning into foes will be seen as an indication that the BJP is not seen as a winning horse any more.

TDP leaders are unsure of the Modi vote that existed in Andhra in 2014 and many of them believe if the TDP contests on its own and blames the BJP for not giving the state special status, it can sweep the 2019 polls. Political posturing apart, the BJP knows on its own, it is a mere paper tiger in Andhra. Despite the differences, the party knows its best bet is to sail with Naidu, since Jagan is tainted by corruption cases against him.

Even Naidu, given that he cannot be part of a Congress-led UPA, has few options. He has experimented in the 1990s with the idea of a Third Front to know it is a rickety political structure that comes with an expiry date attached to it. With Andhra being cash-strapped, Naidu can hardly afford to make Modi a political enemy. #KhabarLive