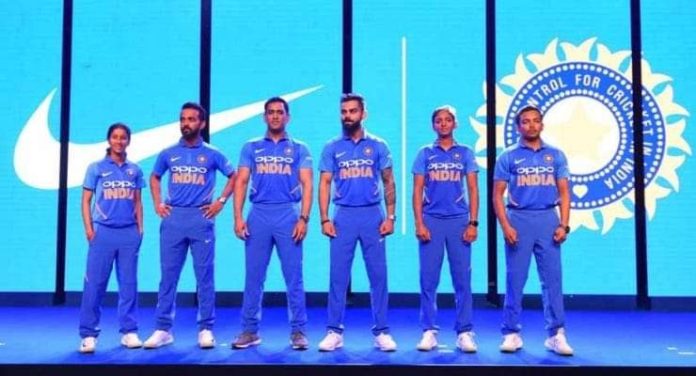 The BCCI and Nike jointly launched the new national kit for the Indian men’s and women’s ODI teams at an event held in the city on Friday. The Kohli’s team will don the new jersey in the ODI series against Australia, starting at Rajiv Gandhi International Stadium in Uppal on Saturday .

The brand new jersey in blue is being designed in a way to enhance the players’ dynamic movements in the field and has strategically placed sweat zones to enhance breathability. The multi-directional, slash design approach is expected to help regulate temperature for the players.

Talking at the launch with #KhabarLive, Indian men’s team skipper Virat Kohli said it was always his dream to wear the blue jersey as a child and appealed to the youngsters to strive hard for excellence to earn the jersey. “This (jersey) is the best material I have had in the last ten years. The material is really stretchable. I can’t wait to wear it in the field,” the skipper added.

Indian women’s T20 captain Harmanpreet Kaur said the new jersey is very comfortable to wear and added that the team is working hard to end the long-standing wait of winning a Women’s World Cup. “The feeling of wearing Indian jersey and standing in front of a big crowd is indescribable. It is something you can cherish for so long,” Harman said.

MS Dhoni, the former skipper who won two World Cups for the country expressed hope that the team will continue to do well and lift the ICC Cricket World Cup in June with the new jersey. “We are in the right path. Winning the World Cup is a challenge but we are up for it,” Dhoni concluded.

Indian Test team vice-captain Ajinkya Rahane recalled the memories from the successful Australian tour last December. ”It was the best moment I have had in Test cricket so far. I will try hard to continue play well for the team,” he added.

Teen sensation Jemimah Rodrigues said she is living her dream of representing the country and doing well at the international stage. “I have just completed one year of my international career. I am looking forward to play more and to make the country proud.”

Meanwhile, another youngster Prithvi Shaw who had a great start to Test cricket said he is looking forward to join the ODI scheme of things and added that he will strive hard for the same. “I am not part of the ODI side yet. But I know that If I play consistently well and impress the selectors, I will earn it,” Shaw said.

The new team kits are made from recycled polyester which is in line with Nike’s sustainability policy. #KhabarLive