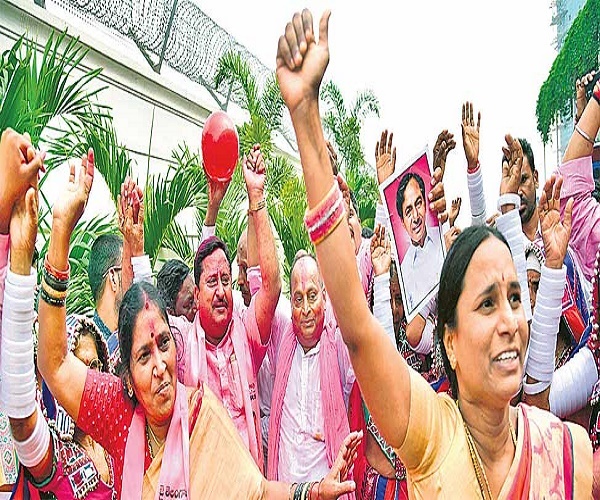 The first elections for the Telangana Assembly were held on December 7, 2018. The ruling Telangana Rashtra Samithi (TRS) swept the elections winning 88 seats of the 119. It was an overwhelming victory.

It was expected that the TRS would win the elections owing to its good governance and multiple welfare schemes. But the margin, many believed, would be small and not as huge as it has turned out, primarily because some vocal sections of the population differed with the government on certain issues and were expected to vote against it. But it actually did not happen.

On the contrary, it was a reverse swing in favour of the TRS. The obvious reason was the unholy alliance of Prajakutami, the brain child of Chandrababu Naidu, the bete noire of Telangana. Prajakutami was an alliance of the Congress, TDP, TJS and the CPI. Its principal members – the Congress and the TDP — are archenemies. In fact, the Telugu Desam Party (TDP) took birth as a feudatory rival to it. So, it was expected that the twain will never meet. But Naidu’s unscrupulous politics made it possible. He is under intense pressure after severing relations with the BJP. His graph has gone down big in Andhra Pradesh and he needed some partner to make good that loss.

The advanced elections in Telangana provided the opportunity for the TDP to cobble up such an alliance with the Congress and test it as a sample for a possible front in AP and at the national level.

Changing Dynamics
Every election is different. The mood and combination of issues are dynamic. They never remain static. They change according to the exigencies of the time. Mostly the votes that swing according to the political exigency of the time decides the fortunes of the political parties. There can be many vote banks, depending on cadre, caste and money among others. There will also be voters who will swing. All these behave differently in different situations.

If there is a serious political exigency, a mere 5-7% swing can make all the difference. In fact, it is this phenomenon that is saving the electoral system in India. The same thing happened in Telangana this time albeit with an overwhelming intensity. The exigency here is the State and its avowed political freedom. The people of Telangana saw the ganging up of parties to dilute the State’s political freedom and reacted to it.

Role of Opposition
Let us now see how these opposition parties played their roles in the very first term of the State. All of them forgot the very purpose of the State. They did not evince any interest in the State Reorganisation Act, the implementation of which will enable the consolidation of the State and its much-needed sovereignty.

The Congress simply took it for granted and in addition it wanted special treatment for itself because it had granted the State. The TDP dictated by Andhra Pradesh’s interests was creating all kinds of impediments in the implementation of the AP Reorganisation Act. Its local outfit was simply following its high command’s diktats rather than espousing Telangana’s interests.

The TJAC/TJS is an interesting study. They were crying hoarse about Telangana and implementation of ‘udyama akamkshalu’. But they just forgot the big picture of the State, its consolidation and the APRA. They were making inconsequential protests — on their own and in association with other parties — on certain archaic and imaginary issues against big projects. Finally, they morphed into a political party and joined hands with the kutami. The CPI continued playing its customary anti-government role.

The BJP, which was not in the grouping, also did not do anything better. Its high command was not well disposed to Telangana because of its alliance with the TDP. Even after its separation, it did not change its attitude much.

The local BJP, except joining other opposition parties in berating the TRS, has not done anything special to use its party Central government to help solve Telangana’s problems.

In effect, all the opposition parties failed to appreciate the special status of Telangana in its first term. In fact, they were talking lightly of this Telangana angle in their post-election discussions. That was their major mistake, which antagonised the people of Telangana.

Righteous Anger
There was some anti-incumbency in certain quarters of the Telangana society before Prajakutami came into existence. If the Congress, TJS and the CPI had formed a front they could have got that vote and made some difference. But their alliance with the TDP and the Prajakutami being run under the direction of Chandrababu Naidu changed the situation. It triggered the righteous anger.

The section that was ambivalent or antagonistic to the TRS also changed its direction and voted for the party and that made this overwhelming victory possible. This is the essence of Telangana ethos at this particular point in time.

It was a remarkable exhibition of political sense by the people of Telangana. In 2014, they voted for the TRS defying the BJP wave all over the country to celebrate their Telangana ethos. Now in 2018, while neighbouring States preferred the Congress, they rejected its front to protect their political freedom from the proxy governments of Andhra and ‘Kendra’ domination. It is a lesson to Chandrababu Naidu for his unproductive and negative politics in Telangana. All parties should learn the right lessons from this verdict. #KhabarLive