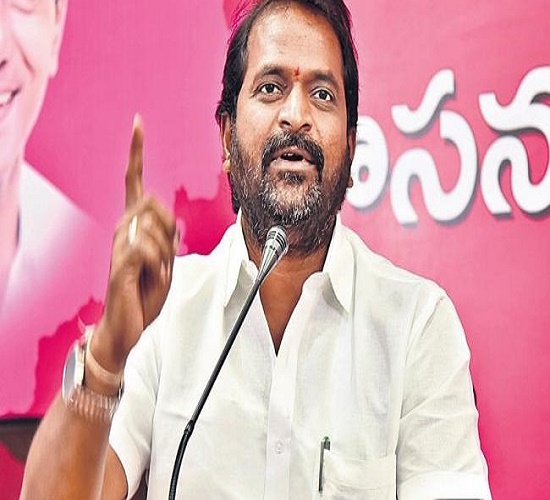 Even as the comments of Telangana home minister Nayini Narasimha Reddy attacking the presence of anti-Telangana forces in the ruling Telangana Rashtra Samithi as MLAs, MPs and even ministers in the cabinet of K Chandrasekhar Rao created a sensation in the party circles, another TRS MLA joined the issue.

V Srinivas Goud, TRS legislator from Mahbubnagar assembly constituency told media persons in Yadadri that there was nothing wrong in what Nayini said.

“What he said is 100 per cent true. Those who had never participated in the Telangana movement and had, in fact, opposed the Telangana formation, are enjoying key positions in the party as well as the cabinet,” he said.

The MLA said when he thinks of such Telangana betrayers in the party and the cabinet, he would get tears in his eyes.

“But I feel there is a strong reason behind KCR taking such people into the party and the cabinet,” he said, trying to tone down his comments.

On Thursday, Nayini commented that several “mu… kodukulu” (ba…rds) who had opposed Telangana and abused KCR in filthy language had become MLAs and MPs of the TRS and even ministers in KCR cabinet.

Political observers say the comments of Nayini and Goud indicate the simmering discontent among the party rank and file over the domination of these anti-Telangana forces in the party.

Critics have already named such elements as “BT batch” (Bangaru Telangana batch), as they are looting the state, while genuine leaders who fought for Telangana were being ignored. #KhabarLive