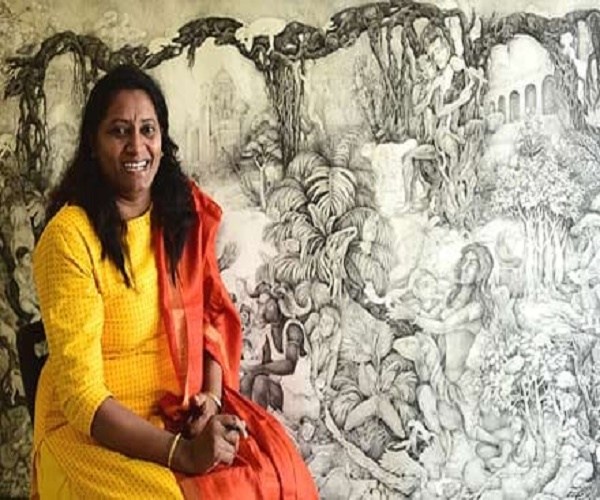 Growing up surrounded by greenery as an impressionable child, Gouri Vemula’s artworks reflect that influence of nature and quest for showing different facets of humanity. This fascination, often, has mythical elements comprising human figures, flora and fauna, which, although juxtaposed in a haphazard way, come together in an organic manner, elevated by the starkness of black-and-white colours.

Although the greenery may have dissipated in the city, Gouri still yearns for the days, when things and life were simpler.

Gouri, who grew up in Dharwad, Karnataka, remembers that it was the encouragement of her teachers which nurtured her interest in the field of art. “Like many people, my first brush with art happened when I was a child. Whenever I made something, art teachers would always admire it and say it was well-made,” says Gouri, whose parents belong to Telangana.

Gouri’s work is a perfect example of the beauty that lies in the simple, but skilled, method of using etching and the powerful pen-ink combination. Of course, art wasn’t a field Gouri really thought about seriously at the time.

That would change when her family moved to Hyderabad and she enrolled herself in a diploma course in Painting from Jawaharlal Nehru Architecture and Fine Arts University, and followed it up with a Master’s in Print Making from Sarojini Naidu School of Art.

Her parents were apprehensive of her choice and wanted her to take up a more conventional profession. But, the art bug had bit Gouri. She, soon, took up painting and would often go around the city looking for subjects to capture on her canvas. She started out with painting, but came to fall in love with the unique, but complex style of Print Making.

Initially, she didn’t like the style as much, but the medium grew on her. “It’s a unique medium, as you have to work in reverse and don’t know how the end result is going to be. You have to do a lot in a limited space,” says Gouri of Print Making. What cemented this interest further was the guidance she got from senior artist Laxma Goud who taught the students the nuances of translating their vision on to the medium.

“During my college years, I would often go out in search of subjects. It was quite challenging to do, as people aren’t willing to pose for 2-3 hours. So, often, we would end up going to railway stations and parks for sketching. People would be sitting there for hours waiting for trains, so, we got a lot of material to draw from there,” says Gouri. That practice continues today as well.

Whenever Gouri finds herself in need of inspiration, she hops into the car and heads to the outskirts and nearby villages. An added advantage being that her husband is a photographer who often joins her on such trips and, together, they traverse the untouched rural beauty of Telangana villages.

Nature continues to be a recurring theme in most of her works; a majority of which are in black-and-white featuring the real and unreal facets of the mundane and imaginary lexicons. “I like the way the motifs get elevated despite being sketched in black-and-white; you can still see the detailing pretty well. I think the same effect can’t be replicated that way in other colours,” explains Gouri who earlier used to divide her time between her studio and home, but, now, works strictly from home to look after her 11-year-old son.

Balancing her motherly duties and passion was easy, as she knew how much time to allocate to each. And that helped her showcase her works in different cities and countries and fetched her a lot of honours.

As one of the few artists whose work was shown at the art fair in Pragathi Maidan in Delhi, she feels happy with all the accolades that have come her way. In the meantime, she has made a name in the art community of the city and the country; her works have found a place in art galleries here and abroad, apart from becoming a part of private collections in the world. She feels blessed that such laurels have come to her, but she does admit that art as a craft still needs appreciation in the city.

“Admiring art just for the sake of art is still missing here. People do see it as an investment now, but a true measure of the work among people is still lacking. Of course, with time, that should change,” adds Gouri. For now, she is busy working on her next series which are again focused around the environment. #KhabarLive