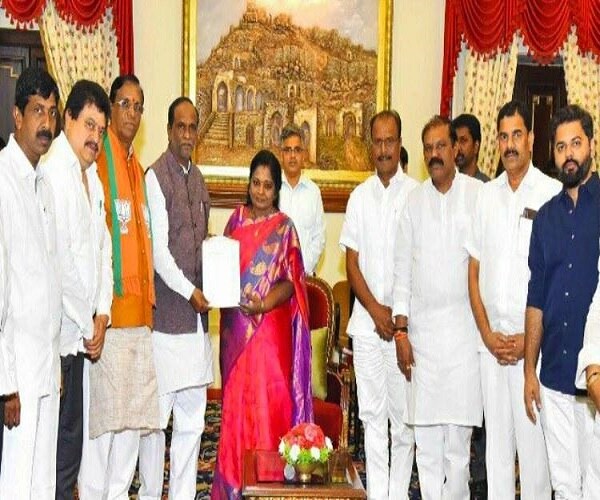 A delegation comprising state BJP President K Laxman, N Indrasena Reddy, V Vivek Venkatswamy, P Jithender Reddy, P Chandrasekhar, and several others submitted the memorandum, in which they asked the Governor to instruct the government to withdraw their plans to privatise TSRTC; have talks with the protesting employees; fulfill their demands; bail out debt-ridden TSRTC by releasing Rs 2,000 crore; and pay employee salaries for the month of September.

ALSO READ:  A 'Plateful Of Culture' - Does 'Hyderabadi Cuisine' Merit A 'Heritage Tag'?

The leaders also requested the Governor to look into the closure of medical services to the TSRTC employees. They requested Tamilisai to instruct KCR to follow due procedure before making any policy decision.

KCR had dismissed 48,000-odd TSRTC employees for going on a strike against his diktat. Further, he has privatised 20% of TSRTC. The CM said that the new recruitment to replace the existing staff would happen soon, along with a pre-condition that they should not unionise in future.

The BJP in the memorandum said that though the employees’ union had issued a strike notice two months ago, the government did not have a dialogue with them.

They further said that it was KCR who’d endorsed the demands of the TSRTC during the elections in 2014 and 2018. “The Chief Minister was on record stating that by way of reducing government taxes, the losses of RTC could be minimised. He further demanded that RTC employees be treated at par with government employees. The same person now is talking in a completely opposite manner,” the BJP said.

The BJP accused KCR of intimidating the protesting employees.“He is further taking recourse to unconstitutional, anti-democratic measures to brow-beat, frighten and intimidate employees using the brute power of police,” they claimed.

“The two major decisions of removal of employees without actually issuing orders and the proposal of privatisation, which is a policy decision, bring to the centre-stage the hegemonic attitude of the government. 48,000 families are on the road today and over one crore people are facing hardship for want of transport facilities, but the government continues to be despotic and apathetic. What is baffling further is that the Chief Minister himself is giving statements which are highly intimidating,” they alleged.

The BJP said that by privatising the TSRTC, KCR is conspiring to handover TSRTC prime properties to private players. #KhabarLive