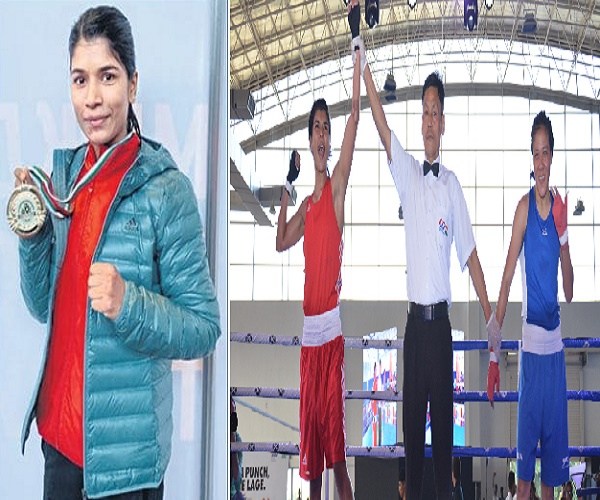 Telangana State boxer Nikhat Zareen, who punched her way to a commanding 5-0 victory over the Philippines boxer Magno Irish in the women’s 51kg weight category final of 70th International Strandja boxing tournament in Sofia (Bulgaria), dedicated her gold to the CRPF personnel who were martyred in the Pulwama terror attack recently.

Speaking from Sofia in Barcelona with #KhabarLive, she said that this gold medal win was a sweet one as she wanted to prove a point or two to her distractors. “I am very happy to win the gold. Today, I gave more than my 100 per cent. I badly needed this win. I dominated all the three rounds. It was a very tough bout. She (Magno) defeated Pinki in the pre-quarterfinals. So I knew I had to be on top of my game to defeat her. I have seen all her bouts in the tournament and got a fair idea. She is a very strong boxer. I had to be on my toes throughout the bout. I didn’t want to give her any chance as I knew she would come back hard.”

Having lost to Pinki in the senior nationals recently, the Nizamabad boxer wanted to prove that she is the best bet for the country. “I lost to Pinki by a split decision in a close match in nationals. So I wanted to prove myself here. With Pinki and Mary Kom fighting for the Olympics quotas in the same category, I want to show what I can do. I have done well in the past and they (officials) have to understand that. I won gold in the Belgrade International tournament in Serbia as well. So I deserve to be considered for the category.”

Speaking to #KhabarLive about her goal after this victory, she said, “I know I need to improve my game a lot. I will go back to training and analyse my game and learn from the mistakes. My focus now is on Asian Championship scheduled in April. I want to compete in as many tournaments as possible and win medals for the country.”

Meanwhile, eminent coach E Chiranjeevi, who coached Nikhat in the past, felt that the win will do a world of good to the Nizamabad boxer’s confidence. “Though I didn’t see the match, the victory with 5-0 means a lot. This is a very good win for her. She didn’t win a gold for a long time and now she won in an international tournament. She also did very well in the recently concluded nationals where she lost to Pinki Jangra in the final. Having not won any gold in two years, she motivated herself and this will help her go further,” he added.

With 2020 being the Olympic year, and Pinki and Mary Kom will be vying in the same category, the veteran coach said that the road ahead is tough. “The Olympic qualification will happen on continental elimination process. Nikhat has the talent to play in Olympics. When Nikhat played Mary Kom three years ago in Assam, the bout was a close one. It could have been anyone’s fight. It is all on the player’s psychology. I think she can only improve from here on.”

Meanwhile, Sports Authority of Telangana State chairman A Venkateshwar Reddy lauded the boxer for her achievement. He, along with Nikhat’s father Jameel Ahmed, celebrated her victory by bursting crackers at the Lal Bahadur Stadium. #KhabarLive