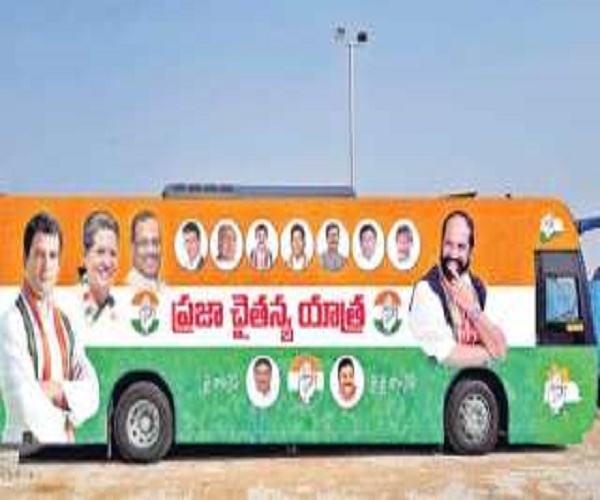 The ongoing bus yatra by the Telangana Congress Committee led by president Capt N Uttam Kumar Reddy that began on Monday has led to fissures within the party in the state.

Senior legislator and former minister from Gadwal D K Aruna found fault with the TPCC leadership for taking out the bus yatra without proper planning and discussion in the party. She differed with Uttam in addressing public meetings as part of bus yatra.

“In the past, too, several senior Congress leaders took out bus yatras and road shows, but they addressed public from the bus itself. How can Uttam and others address public meetings, instead of continuing the yatra?” she asked.

Aruna declared that she would take out her own padayatra shortly to highlight the failure of the TRS government and appeal to the people to vote for the Congress party which had granted separate Telangana state.

On the other hand, the TPCC leaders are creating a big hungama with their Praja Chaitanya Yatra.

At a massive public meeting in Tandur on Tuesday, Uttam said the TRS government had neglected the farm sector during the last four years.

However, with elections round the corner, KCR suddenly developed some sympathy for farmers and started making some announcements, he said.

Uttam Kumar Reddy said by paying just Rs. 4,000 per acre in a season, KCR was trying to make farmers forgot the sufferings which they had gone through in the last four years.

He said that the TRS Government did not provide any input, did nothing for procurement of crops and even remained silent when the Central Government denied assistance for damages suffered due to natural calamity.

He said nearly 4,000 farmers committed suicide during the last four years due to the negligent attitude of KCR Government. By paying Rs. 4,000 per acre, KCR could not get away from the sin of ignoring poor farmers, he said.

He also alleged that the inclusion of TRS members in the Farmers’ Coordination Committees was aimed at misusing the government funds.#KhabarLive