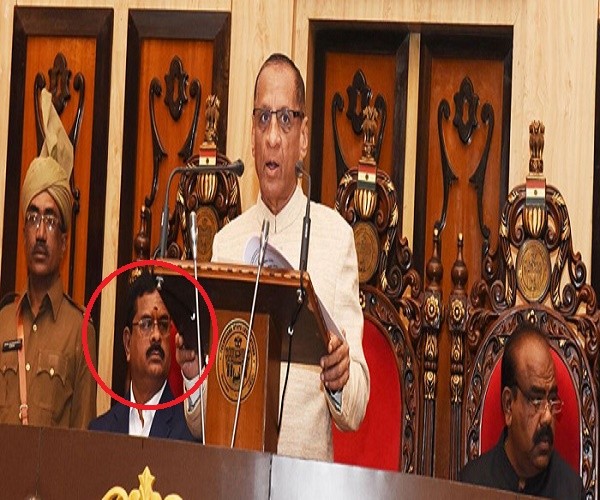 At a time when there is a growing demand for a self- imposed code for lawmakers while they conduct themselves in legislative houses, the despicable act of Congress legislator Komatireddy Venkata Reddy in throwing his headphones at Governor ESL Narasimhan while he was delivering the address to both the houses of Telangana Assembly and Council on the first day of the budget session, makes a distressing commentary on the political narrative of the grand old party.

Though it is obvious that the Opposition members would remain hyperactive when elections are not very far off, it does not mean that they have licence to act the way they like. As soon as the Governor began his address in Telangana Assembly, the Congress members, even without reading the copy of the address supplied to them, tore them into pieces and threw them at the Governor. The pieces, fortunately, did not reach their target but fell in showers of confetti on marshals who stood as a wall.

As the members kept throwing the pieces of paper, Venkata Reddy stood up, removed his head phone and threw them at the Governor which brushed past the council chairman K Swamy Goud causing a slight injury to his right eye. He was immediately rushed to an eye hospital for treatment. In the past, the legislators used to make a show of their muscle power by wrenching microphones in expression of their anger but lately, micro-phones in use are invisible, robbing the legislators the readily available weapon.

It was the darkest day in the annals of the legislative history. Incidentally, the TRS even now defends its act and is comparing itself with Bhagat Singh while Congress party has not even expressed regret at today’s incident.

Monday’s incident of Congress legislator throwing his head phones at the Governor should call for an introspection among the legislators of all hues as to whether what they were doing is proper since they were trying to denigrate the institution of the Governor. The Governor, as head of the of the government, would only speak on its behalf and the practice would remain the same even if the Congress which is in opposition, comes to power.

Though speakers had brought in reforms in the past, they were honoured more in the breach, than in observance. Rules had been laid down that the member who is responsible for breaking the microphone should be made to pay for it. But, for a legislator paying for the microphone, is not a retribution at all as it is a pittance for him. Even then, there are no instances of the law makers paying even that paltry amount.

Only on Sunday, Telangana Chief Minister K Chandrasekhar Rao had suggested that anyone who tries to disrupt the Governor’s address should be suspended for the remainder of the session, but it failed to act as deterrent since the members want to be seen cornering the ruling party for not doing anything for the people.

It is not as though there are no guidelines for legislators on how they should conduct themselves. But no one would follow them and there is no way they could be enforced. The legislators should voluntarily follow them, but they would not and therefore unruly scenes would continue to dominate the proceedings of the legislatures. One can only hope that wise counsel would prevail on Opposition parties, restraining them from turning legislative houses into battle fields to settle political scores. Already people have lost faith in legislatures. Let political parties not allow slide any further. #KhabarLive