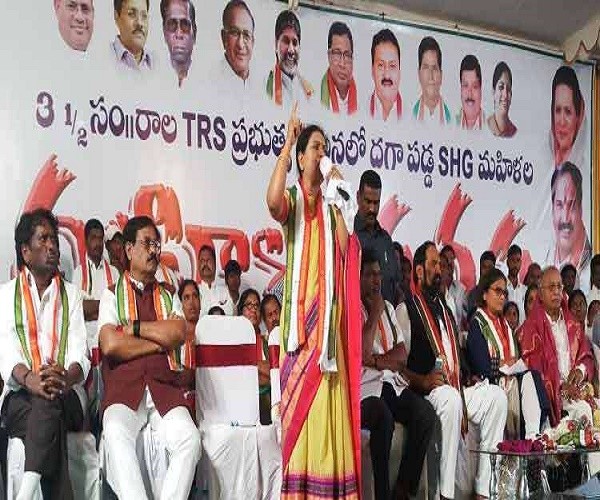 In a possible reflection of just how the Telangana Congress treats its women members, the TPCC Media Cell reduced DK Aruna, its senior leader and former minister, to a mere footnote at the end of a news release. The release was about the party’s ‘Mahila Garjana’ meeting here in the city that focused on the ‘plight’ of women in the State and focused entirely on the Telangana Congress president N Uttam Kumar Reddy’s speech with Aruna finding a mention, literally in the last sentence of the lengthy news release.

Also, none of the five pictures put out by the party show either Aruna or Sharada and instead focussed on the State Congress president. For a party that loses no opportunity to launch baseless bashing of the Telangana Rashtra Samiti claiming that the TRS government does not care for women, the Telangana Congress forgot to practice what it preaches.

Incidentally, Aruna was a top-billed speaker, along with the State Mahila Congress president Nerella Sharada. Aruna spoke at some length on issues facing women at the Congress Mahila Garajna meeting in Qutbullapur Assembly constituency during which she urged women to unite and support the Congress party that would ensure a ‘golden era’ for them if voted to power.

However, the TPCC Media Cell, chose to send a 877 word news release that was entirely about Uttam Kumar Reddy’s speech. The only mention of the party’s women leaders who spoke at the ‘Mahila Garjana’ meeting came in the last sentence: “The meeting was also addressed by senior leaders including D.K. Aruna, Nerella Sharada, Srisailam Goud and other leaders.”

Also, none of the five pictures put out by the party show either Aruna or Sharada and instead focussed on the State Congress president.

It may be recalled that Congress party leaders including its State president, have routinely attacked the TRS for its so called negligence of women in the State. However, the Congress leaders have rarely, if ever, acknowledged government programmes such as Amma Vodi, KCR Kits, Kalyana Lakshmi and Shaadi Mubarak, opening of residential schools for girls, distribution of Batukamma sarees for the poor among several other schemes and programmes aimed at empowering girls, women and their welfare. #KhabarLive