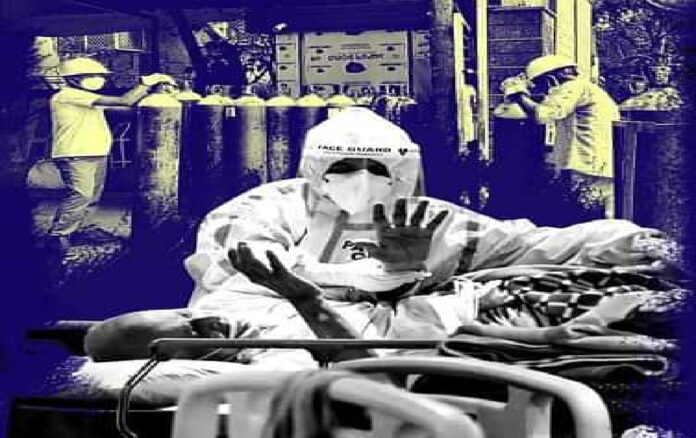 On the contrary, the 21-year-old Tamim Sultana, a resident of Malakpet in Hyderabad, has been frantically searching for hospitals to shift his aunt Asifa for better treatment. Asifa, who contracted COVID-19, has suffered severe lung damage and is availing treatment in the District Hospital of King Koti in Hyderabad. However, the hospital authorities have asked the family to move her to a different hospital. But, the helpless family is struggling to find a bed with ventilator support in government and private hospitals.

Their ordeal disproves the claims of the Telangana government, which appears to be in denial about the bed shortage crisis.

Azzmat Unnisa, President of the Imdad-Ul-Foqraraa Foundation, who is running a helpdesk assisting people in finding beds, oxygen cylinders and attending to other distress calls, has been coordinating with Tamim to help find Asifa a bed.

Unnisa says, “I received this request on May 6 at 3 am, and since then I would have easily contacted 50 hospitals, but I have not received a positive response yet. While some are saying that they do not have beds, the others are not answering. I even tried contacting the Resident Medical Officer of Fever Hospital —  a government hospital — but they too are not answering the calls,” she alleges.

She adds, “This is the ground reality. People are desperately in search of beds and oxygen.”

As per the government’s dashboard, on May 6, all the beds in major private hospitals in Hyderabad like Apollo, Century, Basavatarakam Indo American Cancer and Research Hospital, and Care Hospital were completely occupied. However, Care Hospitals, Mushirabad, which was supposed to have one ICU bed vacant according to the dashboard, was occupied when #KhabarLive verified it with them. Similarly, the dashboard, updated at 12.36 pm, said that Yashoda Hospital, Somajiguda, had two oxygen beds and one ICU bed vacant. But they too were occupied when #KhabarLive contacted them.

Hospitals like Innova Hospital in Tarnaka, which showed that it has four oxygen beds and 18 ICU beds, remained inaccessible. Similarly, Integro Hospital, which was shown to have four oxygen and four ICU beds, did not answer calls.

Meanwhile, underplaying the crisis, Telangana Chief Secretary K Somesh Kumar, who has been entrusted with the COVID-19 responsibility, said on May 5 that compared to other states, the situation in Telangana is “better”. Claiming that some people are panicking and hoarding medicines, he said that the situation is “totally under control”. He also added that Telangana is witnessing a downward trend.

The Chief Secretary said that in September 2020, the state had only 18,000 beds, however, the number has now been increased to 52,000. As a result, Telangana need not worry, he asserted.

The Opposition leaders, however, have slammed the claims of the Chief Secretary, with Telangana Congress spokesperson Sravan Kumar calling Somesh Kumar “shameless.”

Congress Legislature Party (CLP) leader Bhatti Vikramarka also took a dig at Somesh Kumar, alleging that he was misleading people with false information on the availability of medicines and treatment in the hospitals.

“Let us all go and visit the hospitals to get a first-hand report,” he said, and added that responsible officials should only speak the truth. #KhabarLive #hydnews