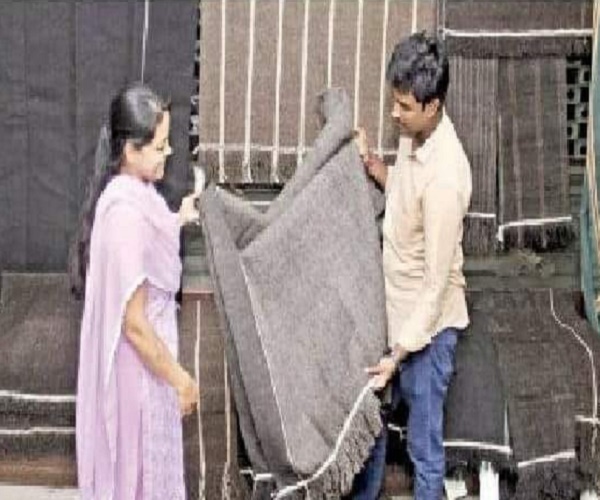 For the weavers of ‘Gongali’ (traditional blankets woven from black wool) that once served the Indian Armed Forces beat harsh winter on the borders, the last spindle for the last of these blankets may have spun.

The shepherds face an uphill task to keep the dying craft alive as the Deccani sheep, the source of the coarse black wool that is used to make the Gongali, is under threat from the state government’s push for increased meat production through distribution of sheep to Golla Kurumas.

Telangana ranks sixth in meat production producing 5.42 lakh tonnes of meat in 2017 and exporting Rs 101 crore worth meat in 2016. Under the National Centre for Disease Control’s (NCDC) initiative, Telangana government was sanctioned Rs 398.88 crore to eight districts for sheep breeding. As a part of this effort, non-indigenous breeds from neighbouring states were brought in which has pushed the breed and the craft to the brink of extinction, according to shepherds .

ALSO READ:  'Smart-Locking' In Telangana Has Political Will, Resources For Shut Down To Combat 'Coronavirus' Spread

“The Deccani sheep have reduced in numbers as the government is promoting the breeds that are not indigenous to the locality,” said Gunda Yadagiri, general secretary for Deccan Gorrela Mekala Pempakadarla Sangham (DGMPS), a society for shepherds from Peddagottimukka village of Medak district,

“Now there are a lot of red/brown sheep that produce hair and not wool, the government is pushing this breed, but the bankets cannot be made from sheep hair, it can only be made from the Deccani sheep wool,” he added.

“Earlier 80 per cent of the sheep were black Deccani sheep in Medak and now there are only 10 percent of them,” said Yadagiri, the 35-year-old, who is a shepherd himself and was in the city for a two-day exhibition of Gongadi blankets that ends on Sunday.

In 2004, the shepherds formed the DGMPS with an effort to conserve the Deccani breed and also the Gongadi blankets. The efforts so far have been met with “limited success” says Krupa, working with Food Sovereignty Alliance, an NGO working closely with rural communities. “There is a limitation to the conservation effort of the sangham as shepherds are attracted to the government subsidy.

If the trend continues we can’t save the Deccani breed. The government is pushing the red sheep only for meat and exports and not looking at it from a livelihood or traditional point of view,” she added.

Despite no help from the state, the shepherds are teaming up with various NGOs and have started identifying rams to ensure that the breed survives. However, over the years the cost of sheep-rearing has also shot up making the conservation effort difficult.

“The cost of medicines have gone up, there is a shortage of grazing lands and other villages charge a fine if he grazes in their lands. Forest department also charges fine for using forest for fodder,” added Yadagiri. #KhabarLive